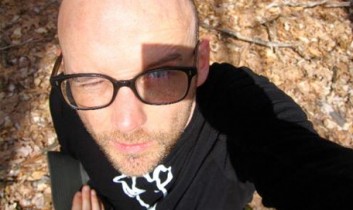 Yeah, you know Moby. He’s that cute bald guy who has been making music and making change since the 80’s. And not just any music … and not just any change. First he went platinum, then he went vegan. He’s brought our movement to the mainstream, and he’s put it in his music.

You also may well have heard that Moby has co-edited an amazing new little book (with activist Miyun Park) vilifying factory farming, called Gristle. Recently, we got a chance to ask him a few questions ranging from art as a form of advocacy, to what’s next for this vegan superstar. Here’s what Moby had to say. 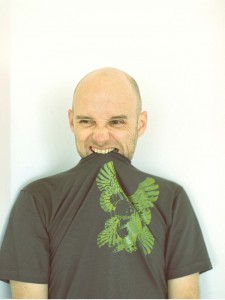 Jasmin Singer (Our Hen House): Should art inform advocacy or should they be separate?

OHH: Does the animal advocacy movement need an anthem? Any suggestions?

Moby: I mean, not to be obvious, but ‘Meat is Murder’ by The Smiths seems like a good place to start.

OHH: Moby Dick is the great American novel and it’s about the relationship between a human and an animal. Did it inform your attitudes toward animals?

Moby: Maybe I misread Moby Dick as a child, but when i first read Moby Dick, it seemed like the whale was the hero.

OHH: Are there any activists or great social justice pioneers — current or past — who have influenced your own activism?

Moby: Sure. Everyone from Albert Schweitzer to John Robbins to Rosa Parks to Thomas of Aquinas.

OHH: What’s your best case scenario for the future of food? Can you imagine a vegan world?

Moby: Vegan food is, simply, better. An animal based diet is bad for the environment, bad for the animals, bad for communities, and ultimately bad for the end user (the person eating the animals). How will that sustain itself over time? People make stupid choices, that’s a given, but they also have a tendency to make smarter choices as time passes.

OHH: What would you suggest for artists and musicians who want to do something for animals with their work?

Moby: Be a happy, healthy advocate, and don’t get in arguments.

OHH: Celebrities like yourself are the greatest mobilizers of mass movements in our culture. In addition to books like Gristle, how can people use their fame to make change?

Moby: I don’t know if celebrities are the greatest mobilizers of mass movements, but I think that people can use their fame to effect change by being informed, open-minded, and willing to put principles before self-promotion. 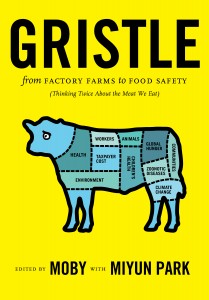 OHH: How did you choose the contributors for Gristle?

Moby: We made a wish-list and got lucky, as 90% of the people we approached said ‘yes’.

OHH: If you could pick three people who could be required to read Gristle, who would they be?

OHH: What projects are next for you?

Moby: I’ve been on tour for 14 months. When that ends, I just want to make more music and hang out with my friends.

Get your copy of Gristle.