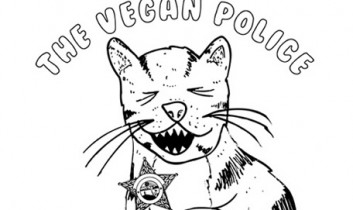 Though I’d heard of The Vegan Police and had long admired their work from afar, I recently was able to meet two of the three masterminds behind it — the fabulous Dylan Powell and dynamite Crista Murphy. (The third is Ryan Sexton. Ryan, if you’re reading this, let’s make a soy latte appointment ASAP.)

I caught up with TVP (that’s The Vegan Police, not Textured Vegetable Protein) last month at the The Institute for Critical Animal Studies North American Conference. I spoke with Dylan and Crista about everything from how they started to what they think is effective activism.

Bellow is the video interview from the conference, followed by a Q&A with Dylan Powell where he sheds light on his group’s name, the importance of community-building, and how he stays regular. (Oh, and since we’re a mutual admiration society, The Vegan Police is doing a feature on me and Our Hen House today! We like to scratch each other’s backs.)

Our Hen House Talks to The Vegan Police from jasmin singer on Vimeo. 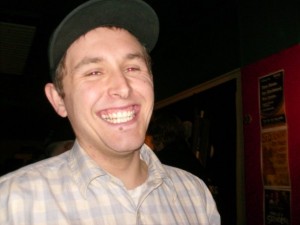 Our Hen House: What is The Vegan Police?

OHH: What inspired you to pick the uber-creative name, The Vegan Police?

TVP: Flashback to October 2008. Isa Moskowitz put a call out to all Vegan Warriors to start making food blogs for the upcoming Vegan Month of Food. Problem: I took horrible food porn pictures and wasn’t the greatest chef. I thought it over and by this time I had numerous campus/community radio shows under my belt, so I thought, “hey why not use that skill and start a vegan radio show!” Next came the name. I wanted something that was a little abrasive, but also comical (i.e. punx). The Vegan Police summed that all up for me. There are still a ton of omni’s (and even vegans!) trying to paint vegans as authoritarian, so for those people I wanted to have an uncompromising show that also let people know how funny veganism could be, and how funny vegans are! For the most part though, most people see the name, beside our comic cat or our new Pignet design, and realize its just a lighthearted take on self policing. In a lot of ways it has taken on its own meaning. It’s funny to see some academics really try and break the name down. I am waiting for a post-modernist critique of The Vegan Police name and logo. Har!

OHH: What is your favorite part about having a podcast?

TVP: We have done the podcast thing and we have done the campus/community radio thing. The best things about podcasting are the things that were supposed to make campus and community radio (college radio in the U-S-EH?) special; the direct connection between the listener, the host and the community. The ability to give a voice and become a hub for activity. Unfortunately, regulations, careerists entrenched in positions of power, and the general unpopularity of veganism make a vegan radio show a really hard thing to accomplish. Podcasting cuts right through to your audience and literally has no rules or regulations (at least none we abide by). You can promote and support your favorite local businesses and restaurants and you can even cuss too! I tend to believe that the less reliant you have to be on other people, the better and more effective you will be. Podcasting represents all of that.

OHH: Why do you find community-building important?

TVP: Absolutely nothing beats face to face community. There is a lot to be said about internet activism and the way vegans have been able to network in the social networking age, but there is also a hell of a lot to be said about faux internet communities. I was lucky enough to live in a place where the animal rights community was already vibrant and where the people actually stayed! Niagara Action for Animals, HOOPLA HOOPLA! I owe a huge debt to them and the amazing work that happens in this community is a direct result of people consciously laying down their roots and fostering community. Although it might get us some more listeners to not talk about the Niagara Region so much, it definitely has been and will always be the focus of the show. “Do what you can, with what you have, right where you are.” – Anon 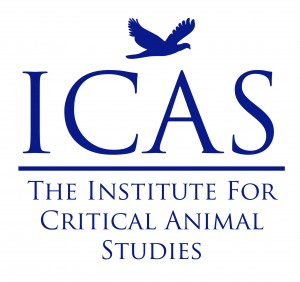 OHH: When and why did you decide to partner with the Institute for Critical Animal Studies? What does the partnership consist of?

TVP: The partnership with ICAS came out of a relationship between Anthony Nocella and me. Anthony is definitely someone I point to as doing extremely important on the ground activism. Anthony says Paulo Freire, I say Antonio Gramsci, tomato/tomato-oo. There is definitely a bridge ICAS is trying to build between the academic world and the activist world, and both of us feel that is EXTREMELY important. Thus far the partnership has consisted of a lot of idea and contact sharing (I stayed at Anthony’s place during the last ICAS Conference and he wouldn’t let me sleep!). It’s kind of exciting times right now in the Critical Animal Studies world, with the local University, Brock University, also growing its Critical Animal Studies program. I would urge everyone to head over to the Institute for Critical Animal Studies website and delve into one of their journals to find out more about the focus and motivation. Oh, and readers who want to go to University to study and advance the rights of all animals, should definitely look to Brock University as a possibility! (We can hang out and be friends!)

OHH: One of your goals is to promote independent music made by vegans. What made you focus that aspect of your advocacy on music?

TVP: Insert lyrics to Propagandhi’s “Rock For Sustainable Capitalism” here. First off, most major label artists and their listeners don’t recognize how tied the “Major Four” are to the Military Industrial Complex, as well as a host of other not so vegan friendly things. Secondly, there is community in supporting local independent arts. I can go and see Lemuria in Buffalo, bring Sheena a donut, and have her rave about the donut between songs! I can book those bands and I can help them out by feeding them, offering them a place to stay or throwing a potluck when they are in town! I can ACTUALLY talk to these people, as in they care who I am as a human being, not just as a “fan.” Plus, they can reciprocate by supporting fundraisers and offering their talents. I think it is great that there are major label musicians/artists/celebrities, etc. out there who use their popularity to shed light on these issues, but I have always been a fan of the “little guy/gal” and always will be.

“All the songs you hear down there they have a purpose.” – Ted Leo.

OHH: When it comes to activism, what irks you? What inspires you?

TVP: What irks me is the tendency to want to draw a million lines in the sand. I am still young, and still very much working my way through my own ideas on what effective activism is, but I do know that this movement constantly teeters on being divisive to the point of losing focus. What inspires me is the people who day in and day out volunteer their time to rescuing animals. I owe a large debt to my older sister for showing me the importance and joy of helping out an animal in need. There are a ton of people throughout this world who are dedicated to that cause and who will never get the respect they deserve. The people who give up dreams of early retirement, or retirement at all, so that they can run sanctuaries. Or the people who get second and third mortgages to continue to care for animals. Or even the people who disregard the law and risk imprisonment to save animals. Those are the real heroes of the animal rights movement. Being vegan is easy.

OHH: What is your favorite thing to eat for breakfast?

TVP: I am of the Seinfeld crowd. Nothing beats a good cereal with Almond Milk. As I have grown older I have learned to appreciate what most would consider very dull and boring cereals. GIMMIE FIBER!

OHH: Is a vegan world possible? How do you think we can most effectively work toward one?

TVP: I think a vegan world is very possible, but a vegan paradise does not exist. I think the best way we can effectively work towards a vegan world is to recognize this movement’s struggle within the grand picture of every struggle. The outcome will always be a reflection of the hard work that people put in everyday. We have to be relentless but also honest that this struggle will only open our sensitivity to other forms of oppression which we previously considered “normal.” Some may see that as a real sad note to end on, but at the same time, realizing that this work is never done is one of the best ways of dealing with all of the stalemates we currently find ourselves in, and really the only way to stay relevant.