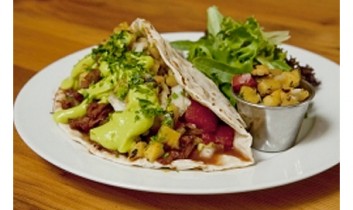 Are your party horns and tofu recipes ready? Next week is World Go Vegan Week, an international campaign to promote all aspects of veganism — from health benefits, to saving the planet, to, of course, getting the animals out of hell. Sponsored by In Defense of Animals (IDA), with the close collaboration of Mercy for Animals (MFA), World Go Vegan Week — October 24 – 31, 2010 — will host outreach and media events galore. Not only does this include leafletings and other grassroots extravaganzas, but MFA is working with non-vegan restaurants to offer yummy vegan options during the week-long celebration (and encouraging them to keep the items on the menu thereafter).

Restaurant outreach is obviously an über important way to make a real live difference for real live animals. Remember Field of Dreams? “If you build it, they will come”? If you provide the vegan options on the menu, they will eat it.

When I think of successful restaurant outreach, the tremendous advocacy efforts of Compassion Over Killing (COK) immediately springs to mind. They’ve nearly single-handedly made Washington, D.C. a vegan-friendly town with their VegDC campaign — not to mention their awesome efforts in Baltimore, Portland, OR, and Austin. And the work of MFA in getting vegan options on menus has been pretty stellar, too.

But for the love of beans, let me reiterate what I always say here in Our Hen House: Even though groups like IDA, COK, MFA, and countless others are doing such groundbreaking work for animals, you do not need to wait for an organization’s lead to do something to create change. IDA, COK, MFA, and every other acronym-laden organization would be thrilled to see you out there fighting the good fight, and being your own leader. With the numbers of land animals killed each year for food averaging about 50 billion worldwide, with around 10 billion right here in the US alone (check out this harrowing graph from 2008 that shows that number in real time), there’s really no time to waste. Hopefully, if you follow Our Hen House, you have found myriad ideas and opportunities to get involved in countless different ways.

As for World Vegan Week (which happens to include my birthday… coincidence? I think not…), in addition to joining the efforts going on in Chicago, New York City (holla!), Dallas, and Columbus, you can also organize your own feed-in, set up an education display or exhibit, distribute literature, organize a video screening, or — in the interest of delicious and compassionate food activism — work with local restaurants to carry more vegan meals.

Happy World Vegan Week indeed… Since if it were a Vegan World, it would surely be a happy one.

Photo at top of blog: Mercy for Animals