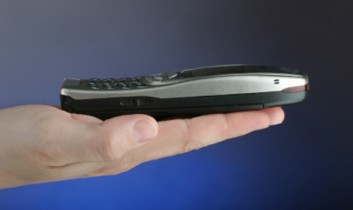 Chances are, there is at least one app in your life that you simply cannot live without. Is it Snood? Or maybe Scrabble? Look, I get it; we need to have something to do while we’re in the waiting room at doctors’ offices or in line at the grocery store.

But beyond just games (no matter how seriously you take them), apps can make the world much easier for vegans and vegan-wannabes. The masterfully-created pro-animal app can, in fact, pack a punch, perhaps even doing its own little part in working toward social change. It’s what I like to call… app-tivism.

For the iPhone, there’s 21-Day Vegan Kickstart, brought to us by the fabulous folks at the Physician’s Committee for Responsible Medicine, which “gives you recipes and resources to improve and regain your health, and includes step-by-step recipe photos.” For the Android, there’s Animal-Free, a “full-featured, pocket reference guide for many common and hidden animal ingredients as well as commonly misunderstood vegan ingredients.” (Animal-Free is also available for the iPhone.) For the iPad, there’s Vegan Pamphlet (which doesn’t seem to have a website, so just search for it in the iTunes store), an interactive pamphlet that educates about everything from the “humane meat” scams to how to maintain optimal health, which is super simple on a vegan diet (duh). 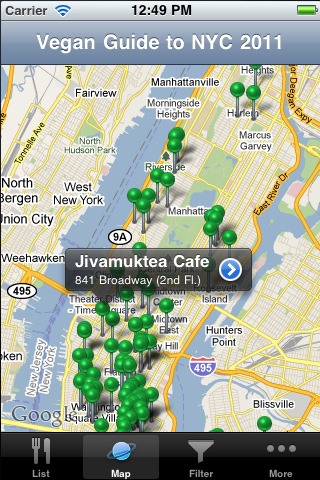 Other handy-dandy apps for you — and for the vegans or almost-vegans in your life — are the restaurant finders. In NYC, there’s the new app version of the popular book by Rynn Berry, The Vegan Guide to NYC 2011 (app designed by Cutting Edge Consulting), which has excellent search capabilities, including the ability to weed choices by restaurant name, neighborhood, cuisine, and more. Beyond NYC, there’s VegOut (powered by HappyCow.net), which I find very useful when I’m traveling, since it finds your exact location (even if you have no idea where you are) and tells you precisely where you can find the nearest vegan grub. For the Android, there’s Local Vegan-Friendly Places, which allows you to “always have the closest vegan-friendly places one click away from your menu.”

Speaking of Androids, if I have to state the obvious, there is room here for serious expansion of vegan apps. Apple seems to be more-than-slightly ahead of the game as far as vegan and AR themed apps are concerned, so for those tech-savvy entrepreneurs out there, perhaps you should jump on the Droid bandwagon. Or, even if Apple is your fruit of choice, perhaps creating a useful pro-animal app could be that big project you have been looking for?

A couple other apps that are on my iPhone right now include Is Your Wine Vegan (search for this on iTunes, since nobody wants their alcohol preserved in fish bladders), and VegQuotes (inspires some of my podcast’s opening quotes). And, according to my unscientific, unofficial Facebook and Twitter survey, others’ favorite vegan/AR apps include:

Are you noticing a food theme here? Since I, probably like you, absolutely love food in very deep, heartfelt ways, the multitude of food-related apps makes my stomach sing. But I do see more room here for activism apps. For example, the huge powerhouse, Change.org has an iPhone app that provides “daily news and information about important social issues and empowering people to take action.”

“Empowering people to take action!” With 50 billion land animals killed worldwide annually — 10 billion in the U.S. alone — taking action is exactly what we need to do. Since we live in an on-the-go society, mobile apps can be an easy, effective tool for activists and activist organizations to create change for animals. The Change.org app is one example of how to make technological activism go mobile. Many of the vegan food apps and recipe finder apps are also doing their part to raise consciousness about the greater good. How can we raise the (soy) stakes even more?

Feel free to use the comment section below to tell us about your favorite apps, app designers, or even your ideas for mobile apps that the animal rights movement could use. Forget your troubles and just get Appy. There’s no time to waste.