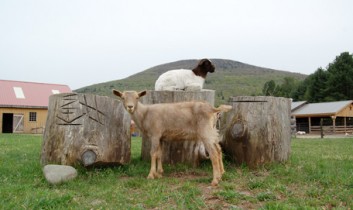 Sometimes I watch cartoons, and no, I am not ashamed that you know that. But every so often after my cartoon, they will feature a “real kids” segment, which from time to time will make me shout words at my TV screen that no kid should ever hear. That’s because, sometimes, pretty music will accompany little Junior milking a cow named Bessie while squeaking in delight, or happily going to a zoo to pet a giraffe.

Of course, the atrocities of the dairy industry are never mentioned. The producers leave out the fact that the very cow that Junior is milking was forcibly impregnated (raped) to create that milk, that Bessie’s offspring are on their way to be slaughtered for veal, and that once she’s “used up,” Bessie herself will become Junior’s low-grade school cafeteria food. The producers also don’t point out the inconvenient truth that the beautiful giraffe Junior is admiring is actually a prisoner, so far away from his natural habitat and his family that his body and mind are slowly deteriorating, and his basic needs are being ignored. 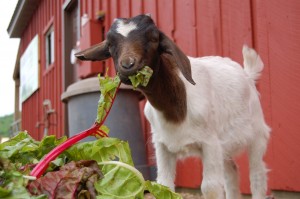 “Somebody should write a letter,” Mariann would tell me, equally horrified by what we were viewing, and shaking her head in disbelief at the sick ways our country’s youth are being manipulated and fed lies. I, of course, was too busy giving our TV a piece of mind to notice. Still, curses aside, we have written letters, voiced our complaints, and — in the rare instance that the network actually posted something accurate and pro-animal — thanked them.

For Jessica Almy, founder of the blog VegBooks, it was a Sesame Street episode that she was watching with her little girl that ultimately caused her to act. According to her blog, “When my daughter was two, I bought her a Sesame Street DVD that taught numbers and counting. But the video was about more than 1-2-3s — one segment featured a dairy cow who encouraged kids to drink her milk!”

So rather than just proclaim “somebody should do something,” Jessica took it upon herself to speak up. She started VegBooks in order to shed light on the positive books and movies available to kids, ones that specifically feature accurate, positive, pro-animal messages.

“Kids are bombarded with messages day in and day out, some of which affirm our values and some which don’t. I launched Vegbooks to assist parents — and aunties, uncles, teachers, godparents, and friends — in finding books and movies that affirm vegetarian and vegan values. Together we can raise children who value life, the connections between humans and other animals, and the need to protect the earth and all its inhabitants.” [Emphasis added.]

Just like the awesome diversity of grub available to you when you ditch animal products and go vegan, as you can see from VegBooks, when you abstain from showing your kids cruel, exploitative messages concerning their treatment of other beings, there are still a multiplicity of books and movies available that might actually result in little Junior growing up to be true to his ethical beliefs.

And by the way, this kind of activism of Jessica’s — this I’m-not-okay-with-this-so-I’m-going-to-CHANGE-IT — is exactly the mindset we should each have when it comes to speaking our minds and changing the world.