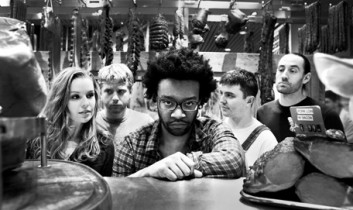 Combining theatre with politics is not a new concept. But animal issues are on the theatrical agenda far too rarely, particularly given the rapidly expanding reach of the animal protection movement. As an actor-turned-activist, I am very excited when I see this happening — the power of theater can be enough to truly awaken and enlighten even the most rabid meat-eater.

Recently, several animal-themed plays have appeared on our radar. First, there was The Tragical-Comical Trial of Madame P and Other 4-Legged and Winged Creatures, a play about the medieval animal trials (happily, Mariann got to speak on a panel following its NYC debut). Then, there was I’m Sorry: How a People-Pleasing Apologist Became an Animal-Loving Activist, a one-woman play starring Katya Lidsky which Our Hen House’s Hollywood correspondent, Ari Solomon, gave a glowing review on Episode 53 of our podcast.

Another is Dead Pile, a new play written by Laura Jacqmin that follows the story of an undercover investigator inside a dairy farm. Dead Pile opened this past Friday and runs through February 27 at Stage 773 in Chicago. Be sure to catch our podcast this weekend, where Mariann and I will review this play. You can see how passionate I am about theatre centering around animal issues — it’s enough to make me book a flight in mid-February to the unbelievably chilly Windy City (plus, we had the added incentive of enough airline points to get us to and fro).

I spoke with Dead Pile‘s playwright, Laura Jacqmin, and director Megan Shuchman, all about their new theatrical endeavor, and also got their thoughts on the role of theatre in creating change.

Our Hen House: What is Dead Pile about?

Laura Jacqmin: The play follows Jeremy, a first-time undercover investigator on his very first exposé at a southern Indiana dairy farm. Being unfamiliar with the incredible demands actually placed on an investigator, he finds that certain aspects of the job are much more difficult than he’d anticipated. He finds himself getting close to two of the workers on the farm – one romantically – and while his beliefs about the abuses taking place on the farm never change, he does find his notions about these specific people are challenged. Basically, the play asks whether Jeremy can become a good investigator – and if he can, what personal sacrifices he’ll have to make.

OHH: What inspired you to set your play in this dairy farm setting? 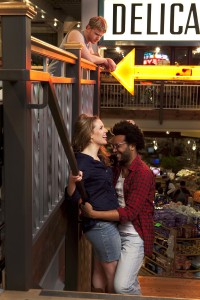 from Dead Pile by Laura Jacqmin

LJ: Originally, I was planning on setting it at a hog farm in rural Texas. I have a lot of family down in Texas, and though none of them are farmers, I find that attitudes about food and farming are very ingrained down there, even among non-farmers. But after doing some research, I didn’t want to mimic the setting of Death on a Factory Farm, a documentary that also depicts a hog farm. At a certain point, I realized that I wanted to set the play much, much closer to Chicago – in part because I felt the landmarks (and the people) would be more recognizable to our audience, but also because it doesn’t allow the play to become an us-versus-them scenario. In other words, the closer to home the play is, the less it allows people to say, that doesn’t happen in my neighborhood. I grew up in the Midwest (Ohio) and relocated to Chicago about 5 years ago, so it felt like very familiar territory to me. Also, I can’t deny that Mercy For Animals’ Conklin Dairy Farm investigation had something to do with it. I’d never seen that level of brutality before, and was shocked that it was happening not too far from where I grew up.

OHH: Do you have a political motivation in addition to an artistic one?

Megan Shuchman: My work is always politically motivated because I think, very plainly, that even just the act of creating art is to do something political. And in this case, what we are attempting to do is to raise awareness about important issues, to spark debate, to provoke conversation (much like the character in our play, Davey). Our political agenda as artists is to bring issues like the ones this play explores to light– and then to allow our communities to decide how to process the information from there.

OHH: Do you see theatre as an important agent of social change?

MS: Theatre I appreciate most reflects the community in which it is situated; therefore, I think theatre can be a very effective agent of social change because it has the power to unearth issues in our society and provides a platform for dissecting those issues in new ways. When most effective, the next step is theatre’s ability to bring people together through the dissection of those issues — which, in and of itself, is a profound and moving thing.

OHH: Do you think our relationship with animals will be receiving increasing attention from the artistic community, particularly in theatre?

MS: We certainly hope so!