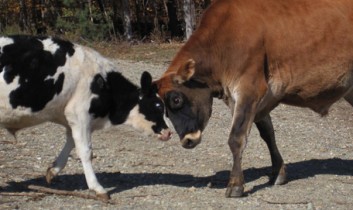 Formerly known as the Eastern Shore Sanctuary, the newly named VINE (Veganism is the Next Evolution) is a sanctuary that provides a haven for rescued farmed animals — such as chickens, cows, ducks, doves, geese, and horses. Recently relocated to Springfield, Vermont, VINE is now nestled in dairy country, making their new commitment to provide refuge to cows that much more necessary.

Sanctuaries are, of course, very much at the heart of the animal rights movement. Though it’s frequently the big ones that wind up on our radar, it’s important to remember that less-talked-about havens like VINE exist — using their limited resources to provide the utmost care for animals, nursing them back to health so that they can live out the rest of their lives as naturally and peacefully as possible.

I am lucky enough to have visited VINE more than once, even interviewing co-founder Miriam Jones and sanctuary superstar Aram Polster for the Our Hen House podcast. I admire what these two (and so many other sanctuary workers) do; devoting their days and nights to providing care for hundreds of animals, and asking for nothing in return. With VINE, their sanctuary work extends beyond the actual grounds, from their informative and touching blog (you really must subscribe) to their pertinent education and advocacy work. 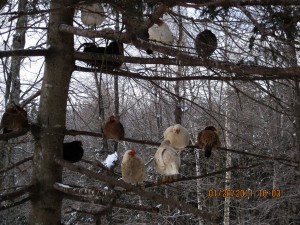 At the sanctuary itself, it’s common for rescued chickens to burrow in one of the tall Evergreen trees. Many choose to sleep there, even through the cold Vermont winter nights, despite having warm barns available to them. It’s such a stark reminder of the freedom that we humans so selfishly steal from them; they want to perch and roost, socialize and interact with their bird friends. Several times during my visits, I would watch with horror as a chicken way high up in the tree would suddenly jump off her branch, wings extended. Though it looked as though the bird had a death wish, turns out she was just soaring. I swear, if you listened closely, you could hear her singing “WEEEEEEEEEEEEEEeeeeeeeeeeeeeeeeeeee……”

Even despite their egregiously abusive histories (to say the least), the animals at VINE — birds and otherwise — can learn to relish life. In the case of Jack the horse, a former neglected “nurse horse” who wanted very badly to join Mariann and I on a snowy New Year’s hike, they can even learn to trust. It is so totally heartbreaking and heartwarming, at the same time.

For us activists, taking in rescued farmed animals and providing them with sanctuary is noble and important work. (Farm Sanctuary offers an extensive resource on establishing your own sanctuary.) But for those of who don’t have the bandwidth to care for farmed animals (or the space, zoning requirements, stamina or knowledge), supporting sanctuaries like VINE — both monetarily as well as through the virtual grapevine (follow VINE on Facebook and Twitter) — not only helps them to survive, but also provides them with the resources necessary to take in more animals.

I should mention that I’m also a big fan and friend of sanctuary co-founder, Miriam Jones. Below, you’ll see a short video I made during a recent visit where Miriam talks about everything from rehabbing roosters (something VINE is known for) to the meaning behind the new name — Veganism is the Next Evolution.