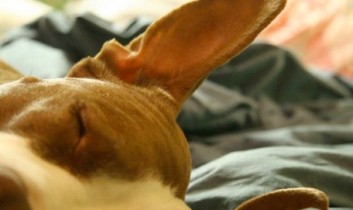 If you don’t yet know a pit bull, then I will make the bold assumption that your life is not as fulfilled as it could be. As the proud human companion to the sweetest pit in the Big Apple, I can attest that these gentle, loving animals are among the true underdogs in our society. But thank dog, there are starting to be huge shifts in the dismal and misguided stereotypes that deceive so many people about the true nature of these darlings. That is most certainly because of the advocacy efforts of groups such as BAD RAP, Best Friends Animal Society, Pinups for Pitbulls, as well as millions of pit bull lovers throughout the world. And, of course, pit bulls themselves are true ambassadors for their kind, always being the first to demonstrate their affable affection to passersby, working quite naturally to debunk the sick and sordid myths that are so far from the truth. In fact, once nicknamed the “nanny dog” because of their gentleness and ease with children (remember Petey, the pit bull from The Little Rascals?), pits are totally devoted to their human counterparts, are incredibly intelligent, and are frequently low-key and remarkably well behaved. 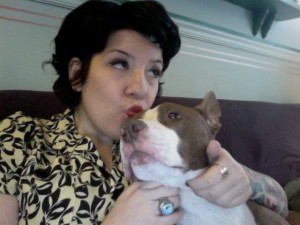 Me and my sweet pit bull, Rose.

Here in Our Hen House, we have approached pit bull issues and advocacy many times, including interviewing, for our podcast, the manager of animal fighting issues at HSUS, John Goodwin, all about the horrors inherent in dog-fighting and how to end it for good; documenting through video a pit bull vaccination clinic in Oakland California that BAD RAP was organizing; speaking with Best Friends’ lawyer Ledy Van Kavage all about breed discriminatory laws and how people can work to put an end to them; reviewingThe Lost Dogs: Michael Vick’s Dogs and Their Tale of Rescue and Redemption; and publishing a variety of blog entries aimed at providing opportunities for animal lovers to get further involved with pit bull advocacy. Some of my favorite blogs we’ve published on that subject include Art for Pitties (featuring a NYC-based fundraising initiative that partnered with pit bull lovers and artists to create an animal-friendly art show to raise awareness); How to PACK a Punch (featuring a club comprised of kind-hearted volunteers who regularly run adoptable shelter dogs from Washington Humane Society’s adoption centers); and, of course, Rescue Chocolate (a totally vegan chocolate company that raises money for animal charities, with a strong bent toward pit bulls, as is evident from the gorgeous pit bull who graces the package of every Rescue Chocolate chocolate bar).

Now, a film that is due to come out this winter is next in line for shaking things up in the pit bull activism world, doing its part to advocate for these precious creatures. “Guilty ‘Til Proven Innocent” is a new documentary created by River Fire Films that nobly touts the tag line, “Putting an END to Breed Discrimination.” The question raised on the film’s website is one that I hope anyone not yet enlightened to pit bull issues, and the gloriousness of these dogs, will consider: “Do we have a dangerous dog breed problem, or do we have dangerous laws targeting dog breeds?”

Check out the trailer below, and then stay tuned for this film’s distribution coming this winter. It will clearly be yet another tool for us to use to end violence, cruelty, and ignorance regarding pit bulls. Of course, the fact that this particular tool comes in video form makes me beam, since film is perhaps the strongest communicator for anyone working toward social change. As this film will hopefully demonstrate, the only thing dangerous about pit bulls are the misconceptions that surround them.