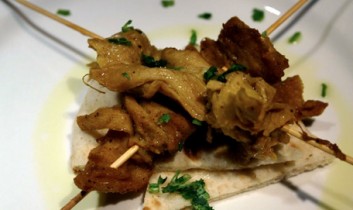 Wildflower is a vegan pop-up restaurant coming to NYC this weekend (lucky me!), but even if you’re not in New York, a lot can be learned from this crowd-funded endeavor created by lifelong vegan (!) Chef Ayinde Howell. Bringing a whopping 28 courses of high-end vegan cuisine — all with a summer grilling motif — to the Big Apple on June 10-12, 2011, Wildflower is, according to the press release, a “direct response to the the demand of New Yorkers who want to see gourmet vegan dining with an upscale atmosphere in lower Manhattan.”

Because of the near impossibility of getting a license to have a food truck in New York (why can’t it be as easy as it is in Portland?), pop-up restaurants have been, well, popping up more and more in this city that never sleeps. It’s refreshing to see a cruelty-free take on it, and with the almost exclusively organic menu featuring such yummies as Hot Water Cornbread, Cajun Mac & Yease, and Fire-Roasted Polenta Quinoa Cakes, you can bet that Wildflower will quickly catapult the already-successful Chef Howell to wild popularity, if not foodie fame. Reservations are available here, and the seating is limited, so get on that. 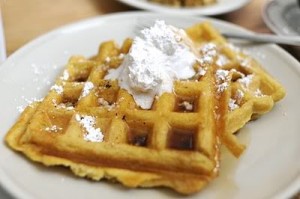 Waffles will be on Wildflower’s Sunday brunch menu

I’m so particularly pleased to see that Chef Howell’s funding came from Kickstarter. As we’ve mentioned in the past, using Kickstarter to fund our vegan dreams is hugely beneficial for our movement in particular. It allows us to latch onto the grassroots and community power we’re known for in order to get the funding we need to create a massive shift in society, one pop-up restaurant, movie, or other creative and compassionate endeavor at a time.