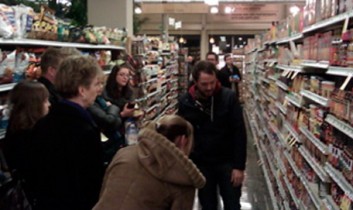 I met Denver-based activist Josh LaBure last year at the Let Live Conference (RIP Let Live), and was immediately taken by his passion and smarts about animal rights. I recently caught up with Josh when he was traveling through New York City on his way to start a brand new internship with PETA. During our scrumptious lunch at one of my favorite downtown hangouts, S’nice (the Soho location, in case you’re curious), Josh told me all about the group he helped found, Plants & Animals Denver, and its subset monthly vegan dinner group, Chomp.

Though I was already wooed and inspired by the mission of Plants & Animals Denver — to “positively influence our local and global communities by advocating a plant-based diet and a lifestyle free of cruelty to animals” — what really made my heart sing was when Josh mentioned in passing that he combined his day job — working at Whole Foods — with his AR group, in order to educate inquiring and compassionate minds about the accessibility and deliciousness of vegan food. What Josh did, along with Chomp and Plants & Animals Denver, was organize and lead a vegan shopping tour of Whole Foods. How do you say “brilliant” with a Denver accent? 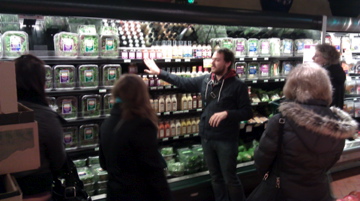 Josh actually had already started planning for his vegan grocery tour, when he found out that “the marketing director of Whole Foods wanted us to figure out ways to bring people in the store” Josh told me. “It ended up working out that the marketing director LOVED the idea, and she made it a store event. So we made up some shopping lists to distribute to attendees, along with some PCRM and MFA literature, and promoted it on our website and through the Whole Foods website. I had 12 people at the first one and 16 people at this last one. The attendees had a ton of questions that I got to answer, and a few people ended up emailing Whole Foods to thank them, telling them that the tour was very informative! It was a great experience for everyone.”

As an added benefit, the enthusiastic folks at Whole Foods provided all attendees, upon completion of their tour, with gift certificates. (Um, why did I not know about this in time?)

Clearly, this kind of organized vegan tour of a grocery store is a project that any of us vegans can take upon ourselves. When I was in my mid-twenties, I had a brief career as a holistic health counselor, and as part of my program I did one-on-one tours of grocery stores — highlighting only vegan items, of course. Even though I was certain that my clients would already know about things like nutritional yeast (which we named on our podcast the “worst named but best tasting food”), most of them had no idea! Offering a monthly vegan tour of a grocery store to people transitioning to veganism can be a great way to open eyes and hearts to the awesome deliciousness of compassion. 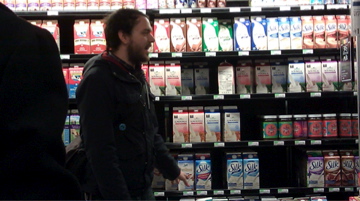 “I think the vegan shopping tours provide a great opportunity to make a vegan lifestyle accessible for everyone,” Josh explained. “For some people, the idea of completely changing their diet is scary and overwhelming. Having someone show you support and answer your questions can be very important to the sustainability of any new life change. I like to call this ‘positive activism.'”

I’ve got to hand it to Josh…. And I must say, his view on positive activism resonates deeply with me. Here at Our Hen House, we like to be indefatigably positive, focusing on creative opportunities whenever possible. There’s so much to be angry and sad about, but if we really latch onto something positive that can change the world one tiny piece (peace?) at a time, then we not only have the power to transform the world, but we also have the power to transform ourselves.

Interested in getting involved with hosting a vegan tour of a grocery store in your own community? Here’s a list of tips that Josh compiled just for you:

So there you have it. Hosting a vegan tour of a grocery store is fun and easy advocacy, and has the potential to turn people on to a yummy, cruelty-free cuisine. All you have to do is put yourself out there. As with Josh LaBure, the results will probably speak for themselves.