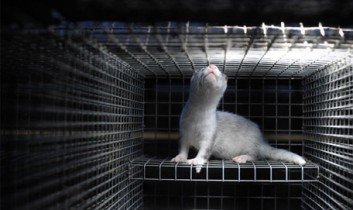 In April, we told you about the forthcoming feature-length documentary, The Ghosts in Our Machine, by mega-activist and filmmaker Liz Marshall.  The film itself, which is in development, not only explores the dark underbelly of animal agriculture, but also gives us in-depth looks into individual animals — highlighting their sentience, their beauty, and their pain. These animals are the ghosts in our machine.

But beyond just the film, this project is a constantly unfolding multimedia experience. It’s Liz’s vision to use the power of the arts mixed with multimedia to bring to life and light the many complexities — and overlooked simplicities — of animal issues. These include personal journeys to veganism, activists who are dedicating their lives to changing the world, and animals who want nothing more than to be more than a ghost, and to live outside this man-made machine.

When it comes to this project, I just can’t get enough. So Liz Marshall agreed to speak with me yet again and give me the latest about her upcoming project. 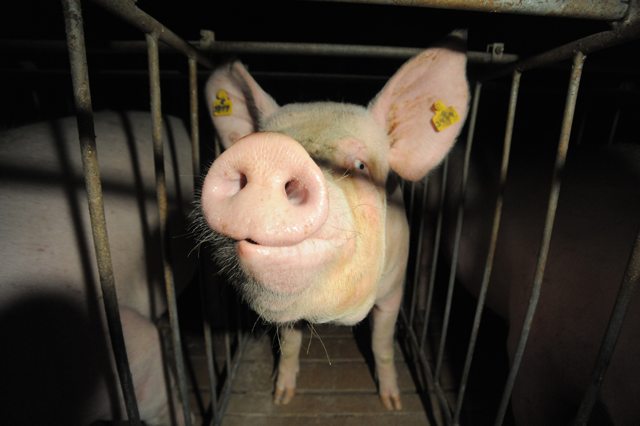 Our Hen House: We recently spoke to you regarding your very exciting new project, The Ghosts in Our Machine. Since TGIOM really is an ongoing journey and exploration into the plight of animals used for profit, rather than “just a film” about animals, we are eager to touch base with you from time to time to see what’s new and how people can continue to be involved with this project. Can you speak a bit about the latest  — including your vision of going beyond just making this a film, and bringing to life a creative exploration? (Photo: Jo-Anne McArthur)

Liz Marshall: I love that you titled our first conversation “The Unfolding Narrative of the Ghosts in Our Machine,” which frames the importance of the narrative ‘process’ to this cross-platform documentary. TGIOM is a personal journey for everyone involved, a journey into one of the darkest, most challenging social issues of our time. Animals used in industries for human profit are truly the lowest ranking members of society, and to face these realities and to come to terms with how our consumer habits support these industries seems to happen in stages for people. So, as part of our online storytelling, I want to infuse the very personal voices of those involved, myself included, as we begin or continue on our path towards animal friendly (ghost free) conscious living. If we can create a welcoming “space,” then I believe we will attract broader interest. Our target audience is animal lovers of all stripes, and so I suspect this means there will be quite a varied response, which will make for an honest and textured, perhaps unpredictable, experience.I hope this will be viewed as a friendly initiation for people to actively reduce their impact on the ghosts in our machine.

Going “mainstream” is something I would normally cringe at, but with this subject matter, it is the aim — this issue needs to be on the public radar. I am committed to unearthing the truth and finding the right language to do so. From a creative perspective, TGIOM lends itself to cinematic language, which has magnetic power, and that is what we want for the film and for the web narrative, for people to be absorbed and to open their hearts.

All of this rambling, by the way, is a roundabout way of me saying THANKS JASMIN for getting it and welcoming me back. TGIOM is an unfolding narrative, and I love what you and Mariann are doing with Our Hen House.

OHH: Well, obviously we also love what you’re doing! Creative activism is our absolute favorite, and you seem to be reaching new heights with it. We’re a mutual admiration society! Tell us a bit about how you’ll be using the website and the film to tell individual animal stories.

LM: The web narrative will feature a series of “ghost stories” released over time, and the documentary will feature 4 stories. Technically we are still in development, meaning I am currently writing these concepts, and so it could change a bit. The logic of having 4 stories featured in the film is that each animal represents an industry: food; entertainment; clothing; biomedical research and/or consumer product testing. I will zero in on portraits of these 4 individuals, and I will linger there. This will include day-in-the-life vignettes, and in-depth stories told over a period of time that illustrate healing bonds and a sense of development between humans and animals — these will be woven together. It is always my filmmaking preference to create intimacy and depth with a character, and so I will apply the same approach with the animals. 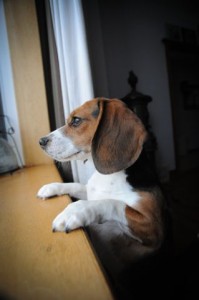 I imagine parts of the film being very quiet, and I like that a lot, as it will allow for reflection and for their reality to sink in. We may require a long lens for observational moments – which might evoke the wrong tone. We will need to experiment with this. We will be filming this summer. I will be working with some top Canadian cinematographers to achieve a highly personal point of view visual signature. The next time we talk about the “unfolding narrative,” I will reveal some surprises, and tell you more about the individual animals. You can meet our featured ghost, Maggie, whose longer story will be in the film coupled with the story of her guardians adopting a sister or brother for her — another former lab dog used for biomedical testing. Watch some of Maggie’s story here.

OHH: Another thing we have in common is our deep respect and admiration for activist and breathtaking photographer, Jo-Anne McArthur, whom we recently featured here in Our Hen House. Jo-Anne’s vital, sometimes gut-wrenching work documenting and saving animals is something that you highlight in TGIOM. Can you expand on your relationship with Jo, and her role in your project?

LM: My partner Lorena and I have known Jo for a few years — we live in the same neighborhood in Toronto’s east end. I really started paying attention to her work (We Animals) about 3 years ago, and I recognized a kinship because we are both committed documentarians who are driven to make a difference through our respective art forms, and we have courage to bear witness. I have focused on global social issue documentary themes since 1994, and I spent my 30’s traveling a great deal, mostly to war-torn and developing countries. Jo has focused on the plight of animals for over a decade, and she is on the road for at least half the year, on the front lines. The reason I chose to feature Jo-Anne in TGIOM is because it became increasingly clear that I needed a central human narrative to help anchor the animal stories, and Jo was that natural fit for me. She has a youthful, radiant, resilient spirit, which is at times in stark contrast to her images, and I find that to be interesting. Her images can be harrowing, but also heartwarming. They pose moral questions. TGIOM is not a biography of Jo, but it will be an up close and personal journey with her as she does what she does, around the world, over the course of many months. Her images will be intimate portals into the lives the documentary brings to the fore. We will be doing some filming this summer. 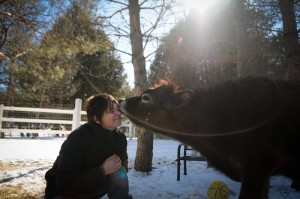 OHH: One thing we are also big fans of is the idea of crowd-funding for activism projects, such as that provided by Kickstarter. Indiegogo is another crowd-funder, and you’ve latched onto that to help the efforts of TGIOM, with an Indiegogo page dedicated to raising funds for your efforts. Why did you decide to fund TGIOM through crowd-support, and how can folks help out?

LM: We have launched an online fundraiser via Indiegogo because we need support to achieve our next immediate steps. We hope your readers will help us keep the narrative unfolding this summer, and consider donating. There are perks for contributors, and it’s a great way of being part of our growing community. Our fundraising drive ends on Friday, July 22, and in addition to the perks we provide for every donation, we are having two fun contests! Our first contest ends on June 22 (Wednesday!) and is for anyone who donates $20.00 or more to TGIOM. Your name will be included in a draw and eligible to win a Cow Jones Industrials Vegan Handbag! And from June 23- July 22, people who donate $20.00 or more are eligible to win this stunning photograph by Jo-Anne McArthur: 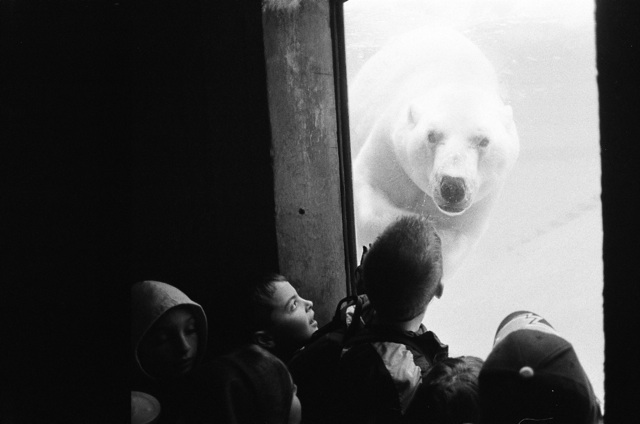 Also be sure to check out the updated trailer for The Ghosts in Our Machine:

In addition to their Indiegogo page, stay tuned to www.theghostsinourmachine.com for constant multimedia updates about the unfolding narrative of The Ghosts in Our Machine, as well as updates on the contests. Also be sure to check out Liz’s last movie, Water on the Table, about Maude Barlow’s crusade to have water declared a right.

All photos used are by Jo-Anne McArthur from We Animals.