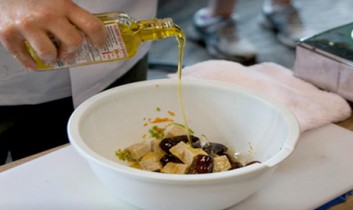 On Sunday, there will be a Vegan Iron Chef competition in — you guessed it — Portland, Oregon. Upon further exploration of this groovy (WHY-THE-HECK-AM-I-NOT-ON-THE-WEST-COAST?!?) event, I learned that Vegan Iron Chef is not just a single event. No. It’s a movement.

According to Vegan Iron Chef DOT ORG (!), “The vision of the Vegan Iron Chef organization is to celebrate creative culinary achievements, unite the ever-expanding vegan community, and encourage and support regional Vegan Iron Chef competitions in cities across the globe. We are a Portland-based nonprofit network utilizing an arts–entertainment platform to bring awareness and respect to the vegan lifestyle, cruelty-free cuisine and respect for all living beings.” 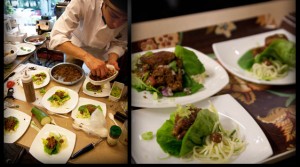 Much like the TV show, a Vegan Iron Chef competition stars local vegan chefs. These lucky and ethical entrepreneurs prepare dishes “inspired by a secret ingredient,” all for a live audience (not to mention celebrity hosts), and then a small judging panel votes for the winner.

Reminds me of NYC’s Veggie Conquest, the brainchild of Jessica Mahady (who spoke about it on our podcast last year). I also made a video about the cruelty-free competition, and from the sold-out crowd (Veggie Conquest sells out in approximately 24 seconds after the tickets go on sale), and the buzz around NYC (which has bled onto Jessica’s second brainchild, the wildly popular Veggie Prom), ’tis the season for grassroots vegan cooking competitions.

Not in the drippingly-vegan Portland or New York City? Not to fear, ethical ones! Vegan Iron Chef has a whole affiliate program where they help you through the process of getting a competition in your own city. They have resources! That means it was someone’s job to write out helpful hints on starting a Vegan Iron Chef competition! I’m kvelling.