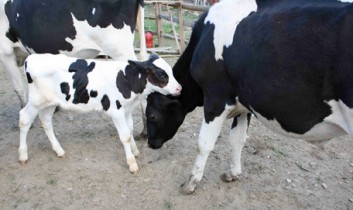 Here at Our Hen House, we like to focus on opportunities that people who aren’t working for animal protection groups can take advantage of, as part of their everyday lives, to change the world for animals. That includes legal opportunities, of course, if and when they come along.

That’s why we are so excited about the new class-action lawsuit against the dairy industry filed by dairy consumers (yes, sadly, they’re the only ones who can bring such a lawsuit) alleging that various dairy companies and trade groups, including the National Milk Producers Federation, Dairy Farmers of America, Land O’Lakes, Inc, and Agri-Mark, Inc., combined to fix the price of milk through their trade group, Cooperatives Working Together.

The lawsuit, which was filed yesterday in federal court in California, alleges that between 2003 and 2010, more than 500,000 cows were slaughtered by the defendants in a concerted effort to reduce the supply of milk, and thereby inflate its price. This added up to over $9 billion in extra profits for the defendants.

One of the best things about this lawsuit is the way it began. It was the legal department at Compassion Over Killing, headed up by the fabulous Cheryl Leahy, that initially theorized, researched and developed the case. However, given the nature of the case, it ultimately had to be handled by a private firm specializing in antitrust. As a result, the plaintiffs are now represented by the class action law firm of Hagens Berman Sobol Shapiro, LLP, which, if it is successful, stands to earn some very big bucks.

This kind of synergy — animal protection groups thinking up ways to go after agribusiness to reduce the money that it’s making off of animal-based foods and private law firms happy to take on potentially enormously profitable lawsuits — is beyond exciting.

If you want further detail about the case, you can find it on COK’s website. And if, by any chance, you happened to purchase milk or milk products from 2004 to the present, and you’re willing to admit that, you want to get in on this. (Yes, pretty much everyone in the country other than long-term vegans are potential plaintiffs in this lawsuit.) You can call the firm at (206) 623-7292 or email them at CWT[at]hbsslaw.com.

Photo at top of blog courtesy of VINE Sanctuary.