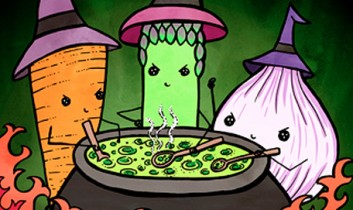 What’s extra special about the upcoming Veg-O-Ween party — happening here in NYC on Oct. 29 — is not that it includes a costume contest, it’s not that it’s being DJ’d by the uber-talented and very vegan DJ Lil Ray, and it’s not even that it’s benefiting Mercy for Animals. Though that’s all fine and good (alright, that’s fabulous), what I love the most about this event — which is being organized by the crew behind Veggie Conquest and Veggie Prom — is that it’s being held at Crema (an upscale Mexican restaurant in Chelsea) that is, according to the press release, “happily taking on the vegan challenge for the event.” It’s refreshing to see a fun, vegan event like this reaching out beyond the go-to places and working with some new, open-minded venues to prove how delicious (not to mention lucrative) vegan food can be. Crema will be creating delectable, vegan gourmet tapas (as well as providing a happy hour — and we all know how much vegan ghosts and goblins like to drink). 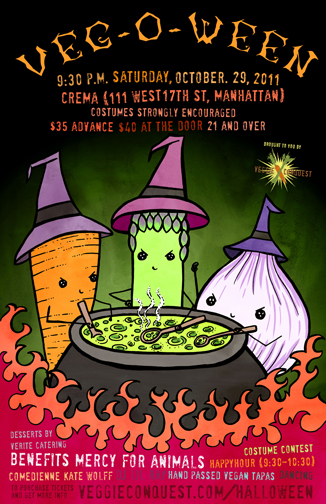 For last year’s Halloween party, I went as Ellen DeGeneres — wig and all. As of last week, I’m actually a blonde (see yesterday’s blog post). No wig necessary. A fact that begs the question: if I go as a vampire this year, does that mean that next year I’ll sport actual fangs? Neat-o!

Alas, I won’t be able to make this spooktacular event, as Mariann and I will be speaking at the Boston VegFest that weekend. Oh, and, in the interest of frightful self-promotion, that’s also my birthday weekend (that’s right — I’m a Mischief Night baby — that explains a lot, doesn’t it?). So perhaps you might be interested in scrimping a bit on your costume (DIY costumes are always better anyway) and donating a few of those saved bucks to my Birthday Wish to raise $1,000 for Our Hen House?! Our Hen House is completely listener and reader supported, so… support! Help us build a strong voice for animals! Thank you!

And on November 2, if you’re in NYC, join us for a Hen Party!