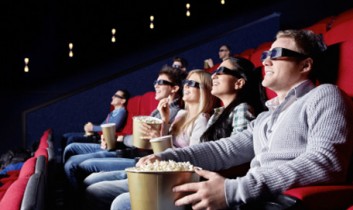 I’m never quite sure what to do with big, glittery, animal-centric movies. You know the ones: Those red carpet-worthy Hollywood films boasting stars like Drew Barrymore and Ted Danson that tout feel-good messages like “Save the Whales!” On one hand, they are (frequently) bringing positively-framed animal-themed messages to the masses with a budget and bandwidth that animal rights activists can only dream of. There’s often the potential of opening people’s eyes to various aspects of animal exploitation and suffering that perhaps the movie-goer never before considered, like vivisection (think: The Rise of the Planet of the Apes — and don’t miss our analysis of that film).

Take yet another upcoming animal-themed Hollywood film, Big Miracle, starring — yup — Drew Barrymore, as a passionate, whale-loving activist who is trying her darnedest to save three trapped gray whales. Big Miracle is based on Operation Breakthrough, an international effort in 1988 to free several trapped whales from ice in Alaska’s Beaufort Sea. Set to be released in early February, this film has been reportedly made “ethically,” according to The Humane Society of the United States. I don’t have more specifics than that on the treatment of the whales used in the film, and, while that does ease my concerns more than an American Humane Association sign-off would, I doubt I will be paying money to see this movie. My bottom line is that whales were used, period.

Or take War Horse, which I can without question say was the best Broadway play I’ve ever seen (and I’ve seen hundreds). We discussed the power of this theatrical production on our podcast a few months ago. It was one of those pieces of art that changed our lives, that touched us in ways that are almost beyond description. The Lincoln Center production of War Horse — which, happily, uses puppets in extraordinary, expressive ways instead of actual animals — was not only a powerful social justice story about an animal who prevailed against all odds, but was proof positive that you don’t have to exploit animals in order to effectively tell their story. (Another recent example of the ability of artistry to portray animals authentically without exploiting them is, of course, the use of computer generated apes in The Rise of the Planet of the Apes.)

But now, the film version of War Horse — a Spielberg production — is about to be released, and this powerful story will be told using real horses. The trailer makes Mariann weep copiously. Still, despite our deep love for this story, we won’t be seeing War Horse. Our podcast’s Hollywood correspondent, the brilliant Ari Solomon, was given free tickets to a screening of the film, and will give us his take on this movie — as well as his thoughts on the use of animals in film — on this Saturday’s 102nd podcast episode. So don’t miss that.

This is not all cut and dried. I do see the other point of view. I get that you might want to take your kid to see Big Miracle or War Horse, and that, as a result, she might gain understanding that these precious beings are indeed sentient and deserve to live free of exploitation and suffering. And, indeed, it’s undeniable that the role that animals have played in film has, in many ways, helped to shape our attitudes for the better. As eloquently discussed by Colleen Patrick-Goudreau — whose recent talk, Animals in the Arts, was both fascinating and thought-provoking — viewing our relationships with animals through the lens of a filmmaker, or the brushstroke of a painter, can inform and inspire our views in powerful ways. We can watch old movies like The Misfits and Lassie Come Home, and from those, we can grow.