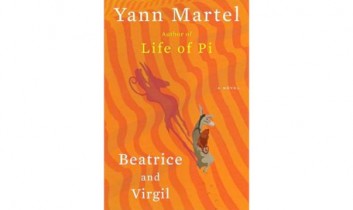 Joining us today is Canadian animal advocate, Stephen Lukas, who is giving us his take on the novel, Beatrice & Virgil, by Yann Martel.

Canadian author Yann Martel won the Man Booker Prize in 2002 for his animal-themed Life of Pi. In Beatrice & Virgil, non-human animal characters again share prominence with their human counterparts. An allegory retelling one of history’s greatest atrocities, this harrowing Holocaust tale profiles humanity’s worst – in an alternate voice atypical of the customary factual accountings of events. As symbols of the oppressed, a donkey and a howler monkey stand in for the persecuted. 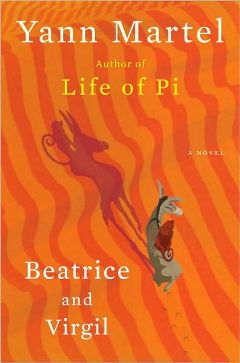 Henry, the main protagonist of this somewhat difficult book, is a successful writer who sets out to challenge the way historical writings have represented the Holocaust.

“My book is about representations of the Holocaust. The event is gone, we are left with stories about it. My book is about a new choice of stories. With a historical event, we not only have to bear witness, that is, tell what happened and address the needs of the ghosts. We also have to interpret and conclude, so that the needs of people TODAY, the children of ghosts, can be addressed… Stories identify, unify, give meaning to. Just as music is noise that makes sense, a painting is colour that makes sense, so a story is life that makes sense.”

Henry’s book, which he calls a “flip book,” is actually two books in one: the first a novel, and the second an essay. After it is rejected by his editors, he abandons writing and moves to “an unnamed great city of the world.” There, a letter finds him, from a resident in the same city who requests his assistance. With the letter is a photocopy of Gustav Flaubert’s short story, “The Legend of St. Julian Hospitator,” a barbarous tale wherein the main character finds not only redemption, but sainthood, despite having pointlessly murdered his parents as well as myriad animals. Only those portions of the text relating to the animal killings are highlighted. His curiosity piqued, Henry seeks out the letter’s author, only to discover it’s an elderly taxidermist, also named Henry, who is struggling to complete his stage-play, “A 20th Century Shirt.” As metaphors for undesirables victimized during the Holocaust, Beatrice (the donkey) and Virgil (the howler monkey) reside on the striped shirt of his play’s title, and are its main characters.

Or is the metaphor the other way around? While animals may be standing in for Holocaust victims, for the taxidermist, who has been writing this play his whole life in an effort to find redemption, the Holocaust itself appears to be a metaphor for the extermination of animal life, which his fictional Beatrice and Virgil call “the horrors.”

And the metaphors don’t end there. Readers may recognize those names as main characters in Dante’s epic allegory of the soul seeking redemption, Divine Comedy – wherein Dante is first accompanied through Hell and Purgatory by Virgil, then, through Heaven, by Beatrice. Moreover, the “real” donkey and howler monkey exist, dead and stuffed, in the taxidermist’s shop. They are his inspiration.

The story that the taxidermist wishes to tell of the suffering of animals reaches a pinnacle in its deeply haunting description of the savage torture of Beatrice, which graphically recreates the kind of barbarity inflicted upon victims of Nazis and their collaborators. In the play, Beatrice and Virgil appear as intelligent, sentient beings fully capable of rational thought – and expression — and possessing the capacity to suffer. And they fully realize the necessity, and unlikelihood, of their story ever being told:

Beatrice: “You asked, how are we going to talk about what happened to us one day when it’s over?”

Perhaps the most extraordinary moment in these complex layers of stories comes when Henry realizes, too late, that the playwriting taxidermist is, in fact, a Nazi collaborator, truly complicit in all the suffering so graphically described in his tale. In the shocking and violent climax, the stuffed animals in the shop are consumed in a fire, and Henry finds that he:

“…missed them terribly. In his mind, he saw them as they stood in the taxidermist’s workshop, Virgil so, Beatrice like this – he tried to make the pictures in his mind as clear as possible. But they faded, as memories of appearance always do. All that remained now was their story, that incomplete story of waiting and fearing and hoping and talking.”

This is a difficult, painful, and complex book. And the lessons it has to offer are not simple. Through its cross-metaphors, Beatrice & Virgil projects that the capacities for life, suffering, fear, pain and self-interest exist in both animals and humans. The misfortunes that befall Beatrice and Virgil mirror the cruelty and domination, institutionalized and otherwise, inflicted upon billions and billions of animals around the world year after year. Denied even basic dignity, animals are systemically tortured and slaughtered in more inhumane ways than the mind can cope with. Man’s capacity to inflict suffering on all living beings, especially those presenting any kind of otherness, is bounded only by his imagination.

And yet, although in many instances it is as painful to read as it is to watch undercover footage from Mercy for Animals, Beatrice and Virgil nevertheless reinforces a reality that will resonate with many. No matter the horrors inflicted upon animals, despite their pain and suffering, no matter how thoroughly their desires and natural instincts are frustrated, and despite all that is taken from them, mankind can never succeed in eradicating the fact that they are like us. And nothing we do to them will ever change that.

Perhaps most importantly, throughout Beatrice & Virgil, Martel posits why we must continue to tell stories about events like the Holocaust, and the ongoing exploitation and slaughter of the animals of our world – the ghosts of our oppression. It is the least we can do. 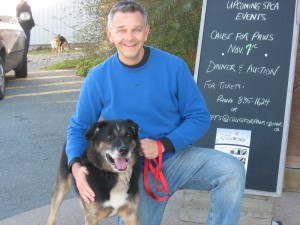 Stephen Lukas is a Human Resources Business Consultant working for a large, international financial services company. In July 2011, after 10 years as a vegetarian, he became a vegan. Stephen runs, practices yoga, volunteers at the local SPCA, and nurtures a manic addiction to vegan baking — all while shunning Facebook. He lives just outside of Halifax, Nova Scotia, Canada, with his husband of 18 years, Peter, their beagle, Gracie, and their kitty, Seamus. If you drop him a line at lukas[at]accesswave.ca, he will send you a picture of his new, vegan tattoo.