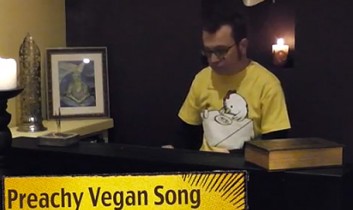 On the off-chance that you’ve missed this “Preachy Vegan Song” that is growing in popularity all over the interweb, be sure to watch it pronto. I’ve definitely been sent my share of self-produced songs about veganism and animal rights, and the vast majority of them are, shall we say, well-intentioned and cute (I’ll stop being a snob — some are actually very good). But “Preachy Vegan Song” is my new favorite. Created by YouTube-identified “VeganSmythe,” this mostly tongue-in-cheek Elton-John-esque inspiring ballad actually manages, despite the humor, to be a really beautiful song, with a catchy and sweet melody. That’s refreshing, especially given the fact that the musician still gets in tons of quotes from vegan celebrities, as well as sound bytes about the many reasons everyone should go vegan. He has a handful of other vegan-inspired songs, too, including “Animal Lover,” “Holy Cow,” “Human Milk Dairy,” and “WTF Do You Eat????”

Seems like VeganSmythe has found his calling. He is changing the world one musical note at a time. And he’s wickedly talented, which never hurt anything (or, in this case, anyone). 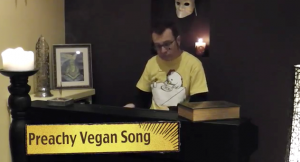