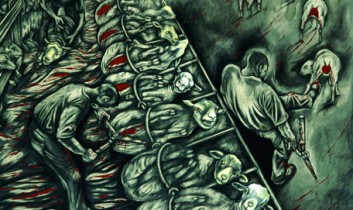 You might recall that last year we produced a video for our Art of the Animal series highlighting the breathtaking work of world-renowned artist, Sue Coe. Sue is one of our heroes, and the work she produces is unique in that it uses heart-stirring — even life-changing — art to educate and enlighten people to animal rights issues, and move them to change the world for animals. We are also huge fans of activist and professor Keri Cronin (who was on our podcast in conjunction with the Niagara VegFest, which she co-organized), and are thrilled that Keri — who is an Associate Professor and the Chair of the Visual Arts Department at Brock University, agreed to review Sue Coe’s new book, Cruel: Bearing Witness to Animal Exploitation. 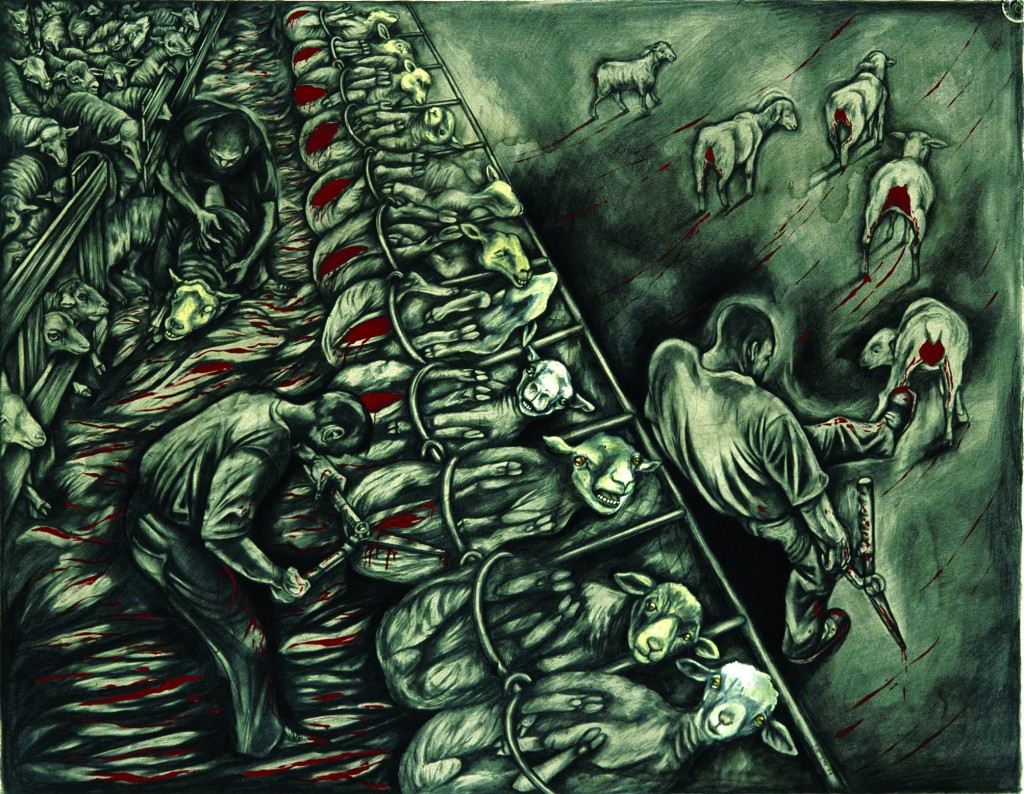 When I was asked to review Cruel: Bearing Witness to Animal Exploitation (New York & London: OR Books, 2011) for Our Hen House, I jumped at the chance. I have an incredible amount of respect for Sue Coe’s art, and knew that this latest project would be a powerful one, a book that will be remembered as a “game changer” in years to come. This is an important publication, one that challenges the reader to take notice of the animal exploitation happening all around them. For those who have not yet stopped to think about the reality behind their meat, dairy, and eggs, Cruel brings the horrors of 21st century animal agribusiness out from behind closed doors. As the subtitle of the book suggests, Cruel is intended to allow readers to bear witness to that which is normally and deliberately kept hidden. For those of us already aware of the atrocities going on in places like factory farms, this book is a powerful tool in our activist efforts, and a poignant reminder of the urgency of the situation. To put it plainly, if we care about the billions of animals suffering out of sight under what are considered “normal” operating practices, we simply don’t have time to waste. We need to do something, and we need to do it now. As Coe’s work makes abundantly clear, complacency makes us complicit. 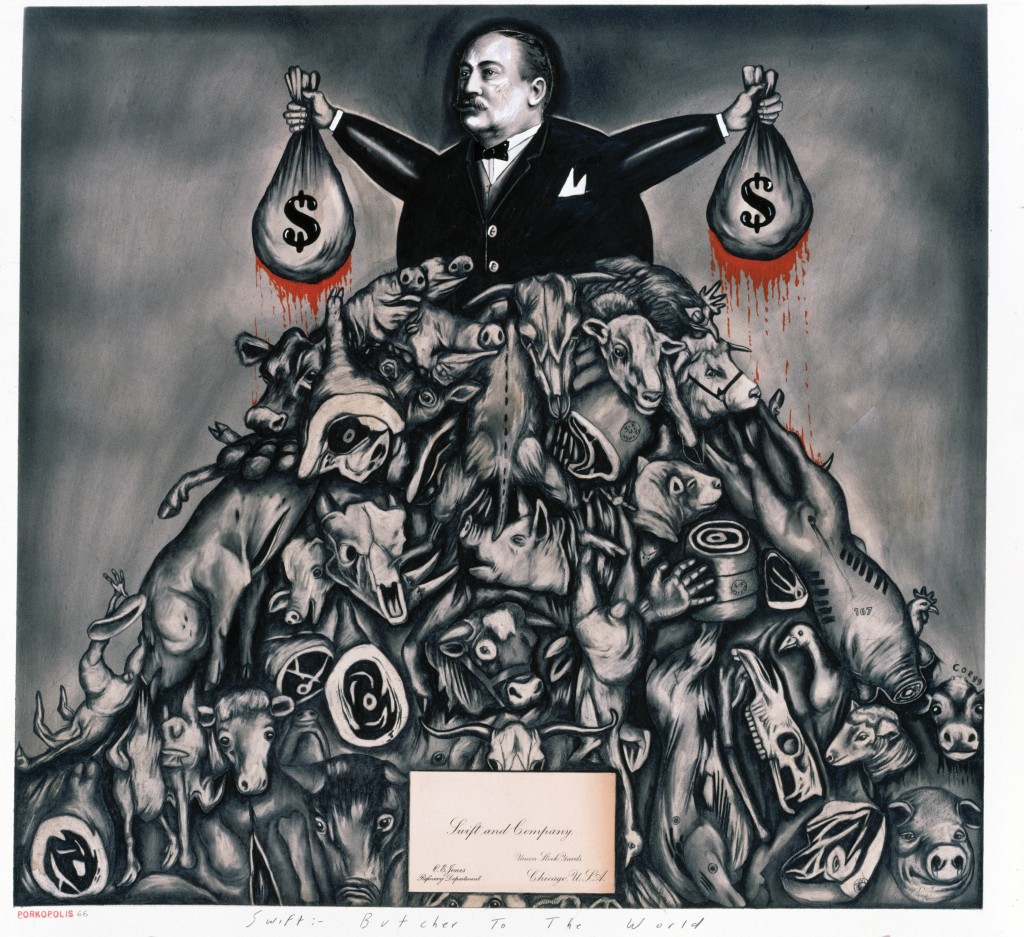 “Butcher to the World” by Sue Coe

Cruel combines a wide selection of Coe’s paintings, drawings, and sketches with essays that delve into the many issues surrounding the treatment of animals in our contemporary society. The relationship between image and text in this book carries deep meaning — Coe’s artwork is tremendously powerful on its own, but when coupled with her unflinching narrative accounts of the brutal reality of places like slaughterhouses, it becomes nothing short of a manifesto.

One of the particular strengths of Coe’s work is the way in which it asks us to think about animals as individuals, a powerful stance against a world that sees animals as mere commodities. In both her writing and her art, Coe repeatedly reminds viewers that these are individual beings with the capacity to suffer, to feel pain, to experience heartbreak, and to form strong emotional attachments. For example, Coe writes of a cow who cried nonstop for 2 full days:

She has cried every few seconds for the last forty-eight hours, not stopping to eat or drink. I know why: her calf has been stolen from her. Her cries must be heard for a radius of a mile, yet no one is listening. She hopes her calf will hear, know where she is, and return.

In the meat and dairy industries, this scene is repeated over and over again: Countless cows crying for calves they will never have the opportunity to love and nurture. Coe wants to make sure we start to listen to these cries because, after all, the cow who continued to cry for her stolen calf “does not have the luxury of hopelessness, and neither do we.” 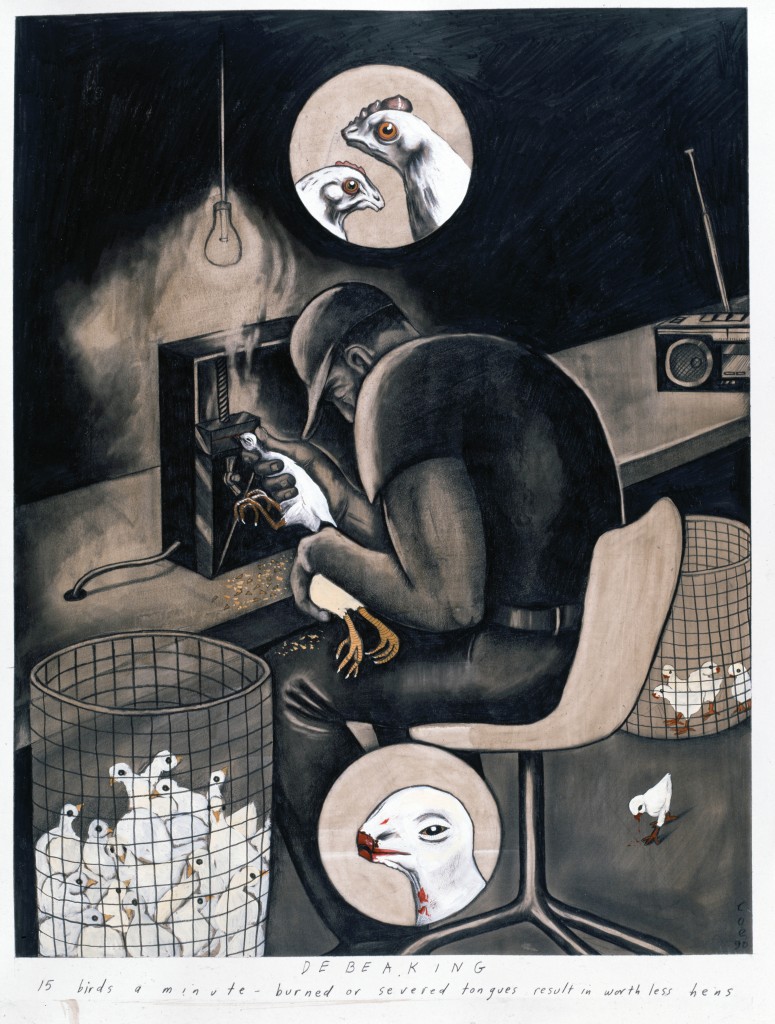 In a chapter called “Living Ghosts,” Coe recounts a Farm Sanctuary rescue she participated in. A slaughterhouse had been closed down because of repeated violations and complaints, and the animals that remained inside were simply abandoned. The slaughterhouse was located in a neighborhood that Coe describes as “transitional — middle-class people moving into what used to be a working class area, with developers just waiting to make a profit.” The scene that the rescuers encountered when they entered the slaughterhouse was nightmarish. They found piles of dead and dying animals, and those animals that were alive were desperate for food, water, and medical attention. As Coe recounts, what made this scene even more disturbing was that “only a few feet away, people were carrying on with their lives, rushing along the city streets, oblivious.” On one side of the wall was abject suffering, on the other, the comforts of a middle-class neighborhood. One of the goals of Cruel is to tear down the walls that prevent us from seeing how animals are treated in our society.

As I was reading Cruel, I couldn’t help but be reminded of the work of another brave woman who used the power of visual imagery to make visible what many would have preferred to have kept behind closed doors. Frances Power Cobbe, the great anti-vivisection activist of the late 19th century, also relied on the powerful combination of image and text in her efforts to stop experimentation on live animal bodies. For example, in an 1883 publication entitled Light in Dark Places, Cobbe included illustrations in order to give “… the reader by a few moments’ inspection a truer idea of the work of the ‘torture-chambers of science’ than can be obtained by a perusal of a vast quantity of letter-press description.” Unlike Coe, Cobbe was not an artist; the images she used were taken directly from scientific publications, a recontextualization of illustrations that originally existed as a way to instruct physiologists and medical students on how to best conduct these experiments. Cobbe felt that this tactic — the inclusion of information taken directly from a scientific source — brought an additional element to her anti-vivisection arguments by moving them beyond the realm of sentimentality. Like us, Cobbe lived in a world that valued the myth of scientific objectivity over the seemingly subjective realm of emotions. 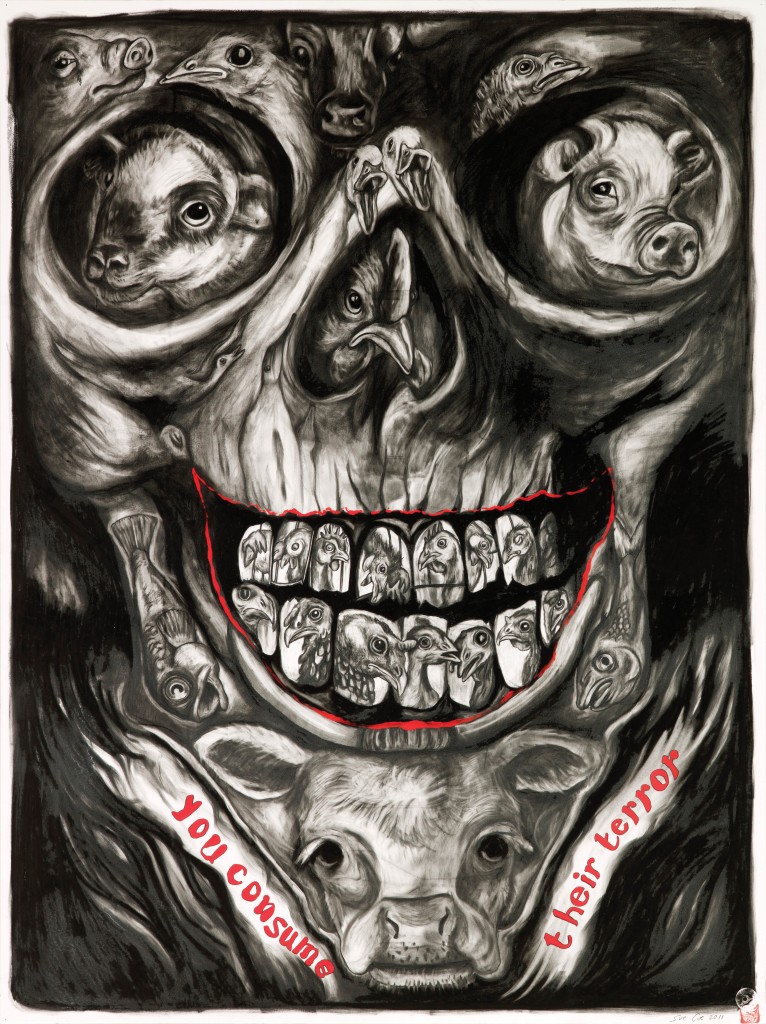 “You Consume Their Terror” by Sue Coe

In much the same way, Cruel includes a series of chapters that explores the science behind the many health risks associated with the current model of animal agriculture. Judy Brody’s essays on things like “Mad Cow Disease,” E. coli, Salmonella, dioxin, and “superbugs” provide an additional — though equally disturbing — point of view to Coe’s writings and images. The combination of Coe’s touching stories of bearing witness to the suffering of individual animals, with Brody’s unsettling accounts of things like “Foot-and-Mouth Disease,” will leave readers angry at a system that has allowed the brutal absurdity of factory farming to become the dominant model of food production in our world.

The subject matter of Cruel makes it a tough book to read. Some of the chapters brought tears to my eyes, others made me absolutely furious. However, this is a book everyone should read – animal lovers, animal activists, and those who are completely blind to animals. As I was working on this review, I had friends and colleagues say to me, “Oh, I couldn’t read that. It would be too difficult.” And yet, that is precisely the point — this is a difficult topic. It is a brutal topic. But until we confront it head on, until we “bear witness” to the horrors and atrocities that are taking place every single second of every single day, nothing is going to change. In the words of Frances Power Cobbe, “Do not refuse to look at these pictures.” There is too much at stake to look the other way. 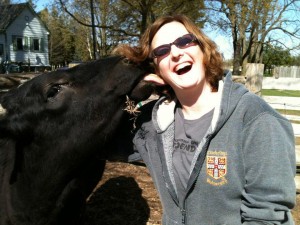 Keri Cronin is an Associate Professor and the Chair of the Visual Arts Department at Brock University. She is the author of Manufacturing National Park Nature: Photography, Ecology, and the Wilderness Industry of Jasper  (UBC Press, 2011) and the co-editor (with Kirsty Robertson) of Imagining Resistance: Visual Culture and Activism in Canada (Wilfrid Laurier University Press, 2011). She is currently working on a book about the role that art and visual culture played in the early animal rights movement.