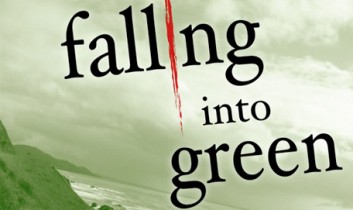 Do you believe you can communicate with a tree, or “hear a voice from nature”? Dr. Esmeralda Green, the narrator and protagonist of Cher Fischer’s new novel Falling Into Green (Ashland Creek Press, 2012), not only believes it, she makes a career out of it. Green is an ecopsychologist who incorporates nature and animals into her treatment of patients and her own understanding of the world. She believes that “ecopsychology allows the integration of everything.” 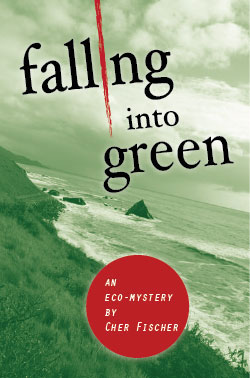 The “eco-mystery” at the center of the book involves the murder of a teenage girl and the death of her aunt years before in the same spot: a cliff overlooking the Pacific Ocean. Green gets tangled up in the case both in her professional capacity and as the aunt’s childhood best friend.

As a novel, Falling Into Green is a good read, complete with the requisite handsome love interest and the classic noble horse loyal to the heroine; as a mystery, it is compelling and unpredictable. But for me, it was most interesting as a portrait of an environmentalist vegan and the moment-to-moment sacrifices and compromises she makes in an attempt to live in accordance with her beliefs.

A fervent environmentalist and vegan, Green is driven by compassion and conservation in all that she does, which requires attention to countless environmental hazards. A few examples include driving a hybrid car, using only volatile organic compound-free wood with the Forest Stewardship Council label in her home renovation, and investing only in environmentally friendly companies.

But sometimes her convictions lead to extreme choices of dubious or minuscule benefit to the environment. For instance, when her hybrid car runs out of both gas and battery charge, she decides not to call a roadside service company to bring her gas because the service truck would be “yet another carbon monoxide-emitting car on the streets.” Instead she chooses to “walk to the gas station and hope they don’t tow my Ford away before I get back.”

To me, the con of a short drive by a conventional vehicle seems worth the pro of not having her own car towed. Some vegans might protest that Green lives her environmentalism the same way we live our beliefs: as a total boycott, not something we decide daily whether to compromise. But Green does make compromises. She buys and wears a dress made of petroleum-based fabric and owns a laptop and TV, both encased in plastic. “I feel very ambivalent about that because as much as I abhor plastic, I love the technology,” she admits. “Another eco-conundrum. The rock and the hard place.”

Her dilemma illustrates a difference between environmentalism and veganism: it is much harder to live a completely environmentally-friendly existence than to adhere to veganism. For instance, in Los Angeles Green would be hard-put to live without a car, so she chooses one with the least environmental impact available. If she is going to have a computer, she cannot avoid the plastic that encases all of them. “I never said I was perfect,” she says, and indeed it’s hard to see how she could be in this regard.

Green can come across to other characters as a caricature vegans know well: a kooky, unrealistic extremist with an alienating superiority complex. But the lengths she must go to just to get close to living her ideals illustrate how hostile our culture is to her beliefs. Yes, she seems to go to extremes to be green, but that is a necessary adaptation to the opposite extremes of the lives most Americans lead.

One inconsistency in Green’s worldview is her relationship with her horse, Sam. She observes that horses have endured “years of human servitude” and have borne it “stoically,” but she makes no comment on her own relationship with Sam or the moral ramifications of the stable whose owners are her closest friends. Of course, there are good justifications for humans keeping some horses: in Sam’s case, his pregnant and tame mother had been abandoned, and the stable rescued her and raised Sam. Horses who have already been removed from the wild need human care. But there is still much to explore here, especially for a character who puts so much thought into her impact on nature.

Author Fischer explores an impressive number of environmental concerns, including little-known problems like the fatal consequences to sea life of desalination machinery. While entertaining, Falling Into Green is also an education. Sometimes inspiring and sometimes discouraging, the novel delivers an interesting mystery and a profile of a woman trying to solve the problems of a society that is barely even aware of them.