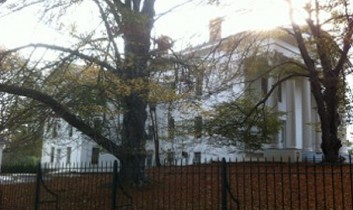 Marti Kheel was an activist, an ecofeminist, a scholar, and a friend. For decades, she worked tirelessly in the fields of animal rights and feminism – and even co-founded Feminists for Animal Rights back in 1982. Marti passed away almost exactly one year ago – way, way too soon. At the time, I shared with Our Hen House readers some of my favorite personal anecdotes about her, as well as some aspects of her activism which I found incredibly meaningful, including thoughts and theories that I feel have helped to shape the modern animal rights movement. 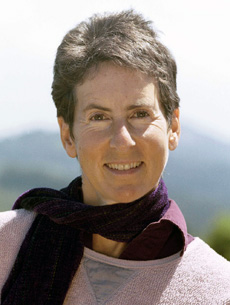 Marti was a great thinker, and perhaps my favorite part of her was her relentless commitment to fight for what she believed in, even though she was almost always swimming against the tide. This included everything from animal liberation, to women’s rights, to raising awareness concerning the health impacts of installing “Smart Meters” throughout San Francisco, without the permission of homeowners. Marti never stopped, and I have no doubt that even though her life was cut tragically short, the legacy she left behind will also never stop.

That was demonstrated this past weekend at the conference held at Wesleyan University, “Finding a Niche for ALL Animals,” organized by Carol J. Adams and Lori Gruen. When Mariann and I were asked to speak at this conference, we instantly and emphatically agreed – what a beautiful and vital way to not only memorialize Marti, but to bring together scholars and activists who are continually influenced by her work, and want to actively use it to propel the movement forward.

We were all set and ready to go. Our required paper was written and handed in, our notes for our activism panel were prepared, our bags were packed, and our thoughts were centered around the wonderful Marti Kheel. In almost a decade of giving talks, we have never had to pull out of speaking engagement. And yet, due to a precipitating logistical snafu that was out of our control, much to our extreme disappointment, we were forced to pull out of the conference, a day and a half before it was set to begin. (I will leave out the part where I hysterically cried for 30 hours, straight.) 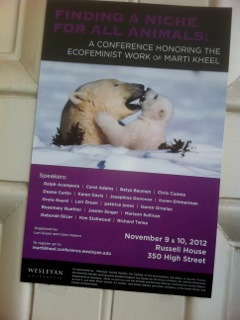 Rather than focusing the rest of this blog entry on my own self-pity, I will channel Marti, and move forward. This is not about me – it’s about a movement in which I am a teeny, tiny part. It’s about justice. It’s about using theory to propel actual change, recognizing the strong links between social justice movements, constantly challenging ourselves to grow – and advocating for other animals, humans and non, as we do so. It’s about coming together as a community to change the world.

I have asked two outstanding activists who attended the conference, Melissa Tedrowe and Sarah E. Brown, to share with us their reflections on “Finding a Niche for ALL Animals,” as well as their memories of Marti. I hope that we can all live vicariously through their thoughts and experiences, if only for a moment. Then, for more than a moment, let’s all channel Marti, and DO something.

My Evolving Thoughts, After Wesleyan

At the conference people asked me how I knew Marti Kheel. The answer is I didn’t – or I did, but in the way that so many of us “know” each other these days. She was my Facebook friend.

Actually, the story goes a bit deeper than that. It starts just under two years ago, when I was struggling to chart a new course for myself. I’d spent eight years in graduate school training for one path, worked at something slightly different for a decade, then found myself unexpectedly “hooked” by something more different still: vegan advocacy and animal rights. Midlife and mid-career, I was considering chucking it all and going back to school or starting my own sanctuary. I also was assembling a new tribe, which I hoped would mirror back to me the person I was trying to become.

Unlike some prominent scholar-activists who (understandably) ignore FB requests from people they don’t know, Marti answered mine. But not with a simple acceptance – she wrote me an email asking about my work and sharing some about her own. She noticed that I was employed at UW-Madison, where she’d been an undergraduate.

Having moderately low-esteem at the time – midlife crisis and all – and thinking of Marti as someone who’d “made it,” I was extraordinarily touched by her openness. Marti treated me as someone who obviously had valuable contributions to make. She was especially encouraging about my research on the dairy industry, which, because it didn’t fit into the official parameters of my job, I’d been pursuing only haltingly.

It may sound dramatic, but after corresponding with Marti I left my UW position for one that pays me to research and teach. I also stopped treating my academic and activist lives as separate. They weren’t for Marti; why need they be for me?

In short, Marti Kheel offered me a view of my better self. And that changed everything.

What I learned at Wesleyan was that I’m far from the only person Marti mentored in this way. Her sister Jane, who cared for Marti up until her death, told us that even at her sickest, Marti answered messages from anyone and everyone who reached out to her. She could not not mentor; it was her part of her natural life force to extend an open palm.

What I also learned at Wesleyan is that ecofeminism – the philosophy that Marti helped define and which animated much of her praxis – never has been more relevant. Among the panelists, we heard from one ecofeminist scholar exploring the implications of chaos theory for animal and environmental advocacy. Another discussed “entangled empathy” as a way of reframing not only our connection to other species, but also global discourse on climate change. Such “updates” to ecofeminism, which was born in the early 1980s, left many conference-goers both dazzled and filled with hope.

Spanning just an evening and a day, this conference was a short one; I spent more time traveling than I did on the Wesleyan campus. But the effort was worth it. I returned home with a notebook filled with articles I must read, along with a dozen new friends and ideas. Threading through and beyond those gifts, however, I returned home infused with Marti’s spirit – a spirit that sees the connections among the world’s harms and therefore its sources of healing.

My commitment now is to carry Marti’s work forward for all my days.

Melissa Tedrowe teaches in the Writing Program at the University of Denver. She can be reached at melissa.tedrowe@gmail.com (or friended on Facebook). 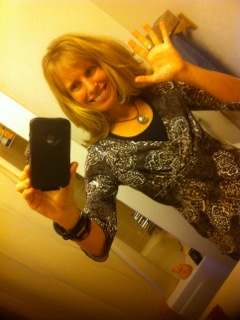 I had the privilege of meeting Marti Kheel several years ago while I was living in the Bay Area. She was a raw vegan, and we met at an Oakland raw foods event organized by a mutual connection. After that, we kept in touch as I worked at a raw vegan center that she frequented.

Just after I met Marti, she connected me with queer vegan women’s events she organized in the Bay Area, and we corresponded over email about holistic health, and things related to a book project my partner and I were (and still are) working on about the intersections between holistic health, veganism, and LGBTQ communities.

Marti’s work, which I was first introduced to as an undergraduate at Vassar College, outlined an ecofeminist philosophy that acknowledges the crucial roles of empathy in activism. Marti explained that killing animals is wrong on “logical” grounds (which is the basis for arguments put forth by folks like Peter Singer), but that we can also argue that one’s feelings about animals, compassion for their lives, and empathy for others’ suffering are valid reasons to be in favor of a plant-based diet. This has felt very true for me in my activist path, and likely does for many others as well.

The conference in her honor provided a great avenue to explore the future of the vegan movement among a vegan activist audience. I get frustrated when individuals and organizations within the vegan movement employ tactics laced in sexism, racism, heterosexism, and fat/body shaming. This manifests in so many forms of vegan marketing these days that it can feel overwhelming, and it can feel especially difficult to confront, or openly criticize, large organizations regarding these issues when much of their work is overall very positive to the movement.

My friend and inspiration lauren Ornelas of the Food Empowerment Project addressed this issue in her fantastic talk about how her work with FEP considers food justice as a complex issue that requires looking beyond simply checking to see if ingredients are vegan. We must ensure that our tactics are respectful to diverse communities and that food ingredients are ethically sourced, as in the case of her nonprofit’s commitment to identifying truly ethical vegan chocolate companies that do not trade in child slave labor. lauren shared that approximately 1.7 million children are victims of slavery in West Africa’s chocolate industry, and as vegans, we must educate ourselves and take a stand against this cruelty. (Note: Please sign the petition asking the makers of Clif Bars to disclose where they get their cocoa beans!)

I completely agree with lauren that this is the direction in which our vegan movement needs to move. I also feel that more work needs to be done to educate vegan leaders about extending respect to all human animals as well as all non-human animals.

Celebrating Marti’s legacy and continuing her work into the future is our challenge and responsibility. I left the conference with a renewed inspiration that vegan activism must always come from the love and empathy we have inside us that extends outward to those around us, and the desire to promote compassionate approaches to vegan activism that honor every single creature.

Sarah E. Brown has written for Curve Magazine, Vegansaurus, Flavorpill, and other publications, and authors the blog Queer Vegan Food. She is a contributor to the upcoming anthology Defiant Daughters: 21 Women on Art, Activism, Animals, and The Sexual Politics of Meat [March 2013, Lantern Books] and is a graduate of Vassar College. 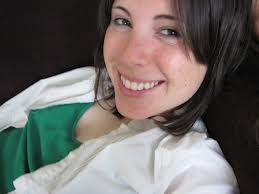