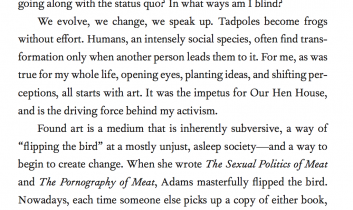 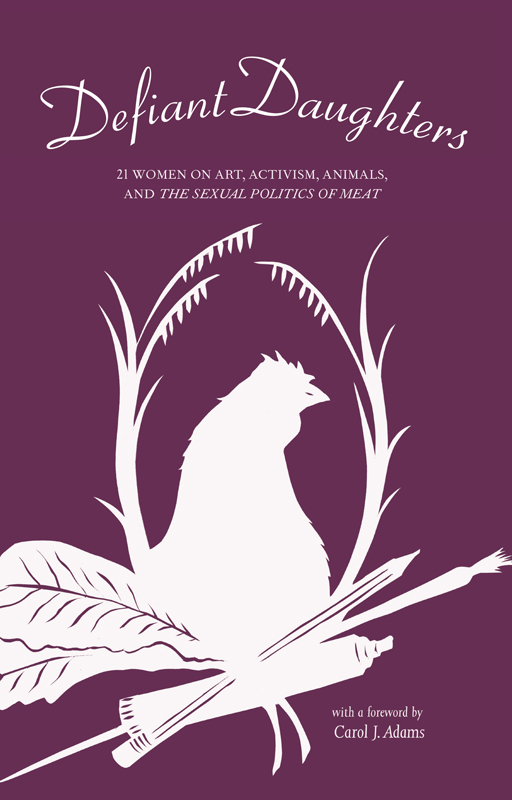 I’m thrilled to have a chapter in this forthcoming anthology, and even more excited that the proceeds of the book will benefit Our Hen House!

Admittedly, my mother has been referring to me as “defiant” for 33 years. So the fact that Lantern Books’ forthcoming anthology, Defiant Daughters: 21 Women on Art, Activism, Animals, and The Sexual Politics of Meat, includes a chapter by yours truly — paired with the incredibly exciting fact that the proceeds of the book are 100% benefiting Our Hen House — just tickles me.

The anthology explores the impact that the work of Carol Adams (who joined us on our podcast back on Episode 85) has had on feminists, animal activists, writers, and thinkers. According to Lantern:

One writer attempts to reconcile her feminist-vegan beliefs with her Muslim upbringing; a second makes the connection between animal abuse and her own self-destructive tendencies. A new mother discusses the sexual politics of breastfeeding, while another pens a letter to her young son about all she wishes for him in the future. Many others recall how the book inspired them to start careers in the music business, animal advocacy, and food. No matter whether they first read it in college or later in life, whether they are in their late teens or early forties, these writers all credit The Sexual Politics of Meat in some way with the awakening of their identities as feminists, activists, and women.

My chapter, entitled “Found Art, Found Hope” explores the imagery used in The Sexual Politics of Meat Slideshow — which was later turned into a book entitled The Pornography of Meat. I discuss how Carol takes the oppressive images intended by advertisers to oppress both women and animals — degrading women and sexualizing meat, all in one fell swoop — and turns them on their head. She appropriates these images to serve good, rather than evil.

As a person with a background in the arts (I was an actor before I was an activist, though, as my chapter explains, the two really evolved together), it is this usurping of images — this type of what I think can legitimately be called “found art” — that speaks directly to me the most. So much, in fact, that when I first stumbled upon The Pornography of Meat, my life immediately and permanently changed. As I delved further into Carol’s work, puzzle pieces started to fit together for me. My own history of being bullied as a kid, and being raped as a teen, started to seem different. These memories did not exactly become less painful, but by noting how Carol’s unique spin gave her the upper hand, I myself began to heal. My own evolution from an actor to an activist was in full swing, and my activism shaped itself into what it is today, with the power of the arts always remaining at my core — even today. For better or for worse, we are each human, and so it is impossible to completely detach ourselves and our histories from our animal activism. Though our activism is not at all about us, a fact I remind myself of from time to time, those of us committed to social justice of whatever kind could stand to be a little self-aware. That’s an ongoing journey, I hope. For me, in so many ways, it commenced with some horrifying images of women portrayed as meat.

My chapter is intensely personal, and, truthfully, that terrifies me. When I wrote it, I’m not sure I actually internalized how very public it would be. But ultimately, as I mentioned, it’s not about me at all, and so I’ll go with that, and (attempt to) put my ego and my insecurities aside, at least for the time being.

Defiant Daughters will be available in March, and is currently available for pre-order. There is a Facebook page which I hope you will “Like” (and share), and for those of you in NYC, I am both thrilled and scared to be speaking (with Carol, and a few other amazing co-authors) at a book reading being held at Bluestockings Bookstore on Friday, March 22. (There are, I’m told, other readings currently being organized nationwide.)  I will also be recording an audio version of my chapter, and will be sharing with you a teaser of that audio excerpt, so stay tuned here at Our Hen House for more.

Needless to say, I am completely elated about Defiant Daughters — to be involved so personally, to have the proceeds benefit Our Hen House, and, of course, by the fact that Lantern is putting together such an important and beautiful anthology. I am humbled to be in the company of my co-authors, and deeply grateful to Lantern for concocting this project, which I am sure will reach a whole new generation of thinkers and do-gooders.

Mostly, however, I am grateful to Carol, without whom so much of the world would still be dark.

Here is an except from my chapter, “Found Art, Found Hope” from Defiant Daughters (Lantern Books, March, 2013). Note that members of the Our Hen House flock get a slightly longer excerpt.

I was 24, and a newly hatched vegan, when a friend handed me a copy of the recently published The Pornography of Meat. That book, rather than the earlier The Sexual Politics of Meat, was my introduction to Carol J. Adams, though I soon devoured both. I never looked back. The images haunted me, and transformed me from an activist who was just finding my voice to one who was ready to take action. For months – well after finishing them – I carried these books with me wherever I went, and could frequently be found on the subway rereading passages or gazing in unending horror at the images. Frequently, a stranger next to me would catch a glimpse of an oppressive ad Adams had dissected, such as the one on the front cover of The Pornography of Meat – a cheeseburger with a woman’s bare legs popping out beneath it, complete with stilettos, touting the catch phrase, “100% PURE BEEF!” – and remain riveted, almost hypnotized, until she reached her stop.

And for me as well, it was Adams’ brilliant and unabashed use of visuals that had an even greater impact on me than did her rhetoric. As I flipped through page after page, I was reminded of my childhood tormentors. All they could see when they looked at me, a 12-year-old child, were my breasts. I was something to be consumed. My body was not mine. By sharing images of other female bodies that had been deconstructed for male consumption, Adams showed me how my own suffering was linked to wider, oppressive social norms. For the first time, I was able to see that the disconnect I felt from my body as a young woman had resulted from residing in a culture in which it is normal for women and animals to be regarded not as sentient and autonomous creatures, but rather, as “meat.”

I was particularly struck by what Adams described as “body chopping,” where an ad shows dismembered bodies – midsections, necks, lips, knees. Ads that employ body chopping generally leave heads and faces out, keeping the images as impersonal as possible, objectifying the person by making her into nothing more than a series of body parts. As Adams points out, it is usually women, not men, who are used in these types of ads. As an example, The Pornography of Meat shows an ad for vitamins, featuring disembodied parts of women, and a slogan that reads, “If you think she’s got it all, you should see what she’s missing.” Juxtaposed against this vitamin advertisement is an ad for custom meat cutting, also, of course, featuring disembodied body parts – this time of non-human animals, ready to literally be consumed.

While these pictures, in and of themselves, disturbed me in incoherent ways, what Adams did with them not only brought me coherence, it brought me relief – even revenge. All of these images were intended, by the advertisers, to convey the message that women and animals are the same, things to be “swallowed.” But Adams transformed that message into something else entirely, making the images convey a story that was not about animals, not about women, and not about me. Instead, it was a story about the motivations and the mindset of the people who created those images. She was revealing the malevolence that lay beneath. She was having the last laugh.

Even though, by the time Adams’ work reached me, I was already vegan, the way she coopted these visuals, and turned the tables, allowed me to once again see things in a whole new light. I recall staring at these images of body chopping and thinking of the breast reduction surgery I’d eagerly undergone as a teenager. Though obviously elective and entirely consensual, the main underlying reason for my surgery – aside from back pain – was to manipulate my body to make it conform to what I was “supposed” to look like, and reduce its impact on those who were intent on dismembering me visually. For them, like the women and animals in Adams’ collection of ads, I was faceless.

Beyond my surgery, the self-mutilation I had inflicted – literally cutting myself – was, in many ways, an attempt to fragment my own body parts. Though used as a way to distract from emotional pain by inflicting physical pain, I cannot help but think that I was so disconnected from my own body that I, too, was beginning to see myself as a piece of meat.

Years later, it was the work of Adams that further dismantled my hardened, self-loathing exterior, allowing me to blossom into the activist and feminist that lay beneath the masks.