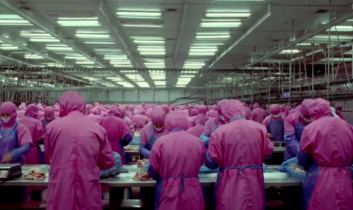 What have we come to?

Here’s what happened: Our friend, filmmaker Mikko Alanne, posted a video to Facebook (he always finds the best stuff) provocatively (yet aptly) dubbed Holocaust on a Conveyor Belt — Assembly Line of Death. We watched it with our mouths agape. We then learned that this clip, which is a voiceless and artistic representation of animal agriculture (not gratuitous violence, but the every day commodification of animals), is a scene from the new documentary Samsara, which for some reason I had not heard of (though apparently I am in a tiny minority here). The scene we watched, which you really have got to see, reminded me of the German-made documentary Our Daily Bread, which we reviewed back on Episode 131 of our podcast. Our Daily Bread is similar in that it is also an aesthetically beautiful film, yet completely disgusting, representing what humankind (“kind“) has come to in terms of it’s relationship with animals — making them faceless, heartless things that are part of a big, cold, steel machine.

What’s interesting about Holocaust on a Conveyor Belt is that it is impossible to stop watching it, unlike some of the short videos showing animal torture that have come out of groundbreaking undercover investigations inside factory farms. Like Our Daily Bread, Holocaust on a Conveyor Belt has no words (though, unlike Our Daily Bread, it does have music). This short video is absolutely one you should share. Perhaps it’s the underlying artistry of it, or maybe it’s the underlying truth, but it’s a film people will watch — even if they don’t think they want to.

Moreover, I’m fascinated by the fact that Samsara is a larger documentary (from filmmakers Ron Fricke and Mark Magidson) that is not actually centered around animal rights at all, but, rather, focuses on “the ever turning wheel of life” (which is what Samsara means in Sansrkit), and is, as the film’s website explains, “the point of departure for the filmmakers as they search for the elusive current of interconnection that runs through our lives.”

Lucky for us, Samsara will be screening in NYC this weekend, and, needless to say, Mariann and I will be seeing it, and discussing it on an upcoming podcast episode. It looks like this documentary, which was filmed in twenty-five countries over the course of several years, will grow its wings and implant itself into the documentary circuit as one of the most important non-fiction movies of our day. The fact that such an eye-opening film carries such strong messages about what our culture has become vis a vis our disgusting treatment of animals, ironically, gives me hope.