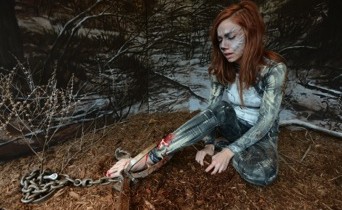 In our current times, so much animal suffering happens out of sight. The industrial production of food and fashion items, for example, deliberately and purposefully creates a situation where consumers are very much in the dark about the many gruesome steps that exist between the living, breathing, feeling animals raised for food and fashion, and the carton of milk or fur-trimmed jacket they purchase at the mall. Consumers in the 21st century are not encouraged to stop and think about the cruel practices that these industries are dependent upon. Indeed, they are encouraged to ignore them. This out of sight, out of mind mentality is a significant point of challenge for activists working to better the world for all species. “If only we could make people see what is really going on!” is a familiar lament of many an activist.

But how do we best go about bringing some of these practices to light? I try to explore, in this ongoing column, some of the many diverse ways artists have found to do this – painting, photography, exhibitions, graphic art, and film are widely used to open dialogue about everything from sentience to suffering. And a recent event in Toronto has strongly underscored the incredible potential of performance activism as another important visual technique in this context.

On Dec. 11, 2012, during the height of the busy holiday shopping season in downtown Toronto, a truly stunning example of performance activism took place in the front window of LUSH Cosmetics. For 24 hours, Shannon Kornelsen, a project manager for The Fur-Bearer Defenders, was “trapped” in a leg-hold trap as part of a campaign to ask consumers to rethink fur as a fashion item. 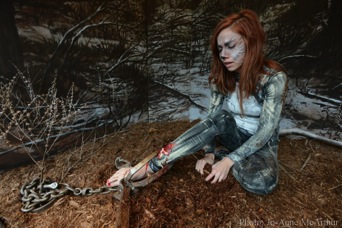 While the costume, makeup, and set design helped create a rather realistic interpretation of a scene that plays out with disturbing regularity in Canada, it was, perhaps, the experiential aspects of this performance that most clearly resonated with those who witnessed it unfolding.

From the outset, this was designed to be a very visible event. The entire 24 hours was broadcast via streaming video online, and viewers from over 40 countries logged on to watch the event unfold. In addition, the decision to stage this performance in a shop window on one of Toronto’s busiest streets ensured that processes of visual exchange would continually occur throughout Kornelsen’s “entrapment.” This performance, in other words, had hundreds of people talking and thinking about the intense suffering experienced by individual animals who are slaughtered for things like the fur trim on winter jackets.

The visual exchanges that occurred between Kornelsen and passersby on the street were incredibly poignant; in this performance, she attempted to “embody the desperation, the loneliness, the pain, and the confusion that an animal would feel,” and it was on this level that a number of important connections were made. As Kornelsen explains,

This was easy for me because I experience my own versions of those feelings each and every day when I confront the things we do to other animals. I meant it all so sincerely – it shocked me how unforced it was – as I originally thought it would be more of an intellectual experience. But the second I got in the trap, all that was out the window. The thinking, the planning. It was suddenly gone. It was suddenly both quiet, and very, very loud all at once. It was very real. I actually let it hit me what I was doing in there, and suddenly I felt like a conduit. A humble conduit of course; I don’t mean to imply that I did their suffering justice. But I think the rawness of it inevitably caused mirror neurons to start firing in other people, and caused them to have real reactions. I saw people crying. I saw people in fur crying. I saw people walk past, do a double take, and reverse back to the window to look in.

There were very few negative reactions to this performance – the vast majority who witnessed it were compelled to sign petitions, to offer messages of support, and to stop and talk to the volunteers who were handing out leaflets about the realities of the fur industry. Kornelsen attributes this overwhelmingly positive response to the specific visual tactics used. She sees tremendous potential in performance activism and feels that on some level it “unconsciously encourages people to let their guard down, since what they’re watching is a performance tribute to some suffering (that’s happening far away). If we had put footage of animals caught in traps in the window instead, I think empathy avoidance would have kicked in and we wouldn’t necessarily have reached as many people. So the ‘performance’ aspect creates a distance between the viewer and the issue, and creates a safe space for them to really consider the issue and whether or not it’s something they want to participate in.” 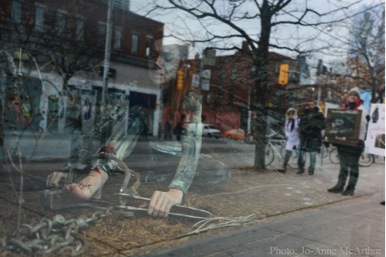 Shannon Kornelsen of Fur-Bearer Defenders in a leg-hold trap with scenes from Queen Street (including a couple wearing fur-trimmed jackets) reflected in the shop window.
Photo: JMcArthur/WeAnimals

This was an incredibly brave and difficult form of activism: the physical discomfort of being trapped for 24 hours, the feeling of vulnerability that accompanies being unable to escape being constantly watched, and the new levels of understanding what an animal in a trap may experience combined to make this an emotionally and physically grueling experience for Kornelsen. As she notes, “the hardest part in the 24 hours was about 2 a.m. I was sitting there and I had this realization that there were animals all over the world, at this very moment, actually caught in these traps. It sounds foolish, because of course there are, but the truth of that really bowled me over. I felt so helpless, and so sorry for them in a more visceral way then I even thought possible.”

Performances are ephemeral, fleeting moments or hours that eventually come to an end. The documentation of performance activism ensures the issues raised continue to stay in the public eye. Jo-Anne McArthur documented Kornelsen’s entrapment, and her stunning photographs capture both the physical and emotional aspects of this performance. These images continue to be circulated online, a testament to the power of the visual. In addition, LUSH Cosmetics produced a video of the entire performance compressed in 5 minutes. The combination of performance activism, photography, and video in the Fur Trim is a Trap campaign has created a powerful platform for awareness and education, and will serve as an important model for other activist efforts.