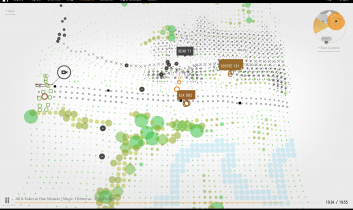 Review: Wild and Wired: A Review of Bear 71

“Sometimes it’s hard to say where the wired world ends and the wild one begins.”

I’m a skeptic when it comes to interactive media. “Interactivity” has always struck me as somewhat redundant, as if reading a book or watching a movie were disconnected, passive pursuits. On first being told about Bear 71, a 20-minute interactive documentary by Jeremy Mendes and Leanne Allison, I took my time. Then, on a bleak winter morning last week, I switched on my laptop, googled Bear 71, and was proved wrong.

Little square monitors flicker. On the left is a timer, counting down. A title reads: “There aren’t a lot of ways for a grizzly bear to die. At least, that’s the way it was in the wild.” When an attractive grid unfurls on my laptop screen, I absentmindedly click my mouse, not realizing I have consented to activating my webcam. I am Human 1384522. I click again, and a grainy image of me opens up, alongside other, counted and uncounted, living elements: Big Horn Sheep, Grizzly Bear 16, Golden Eagle 129, Wolverine, Tree 92, Bear 71. I click away, but it’s too late. I’d been captured and tagged, added to the database of Bear 71 in ways I do not fully understand. 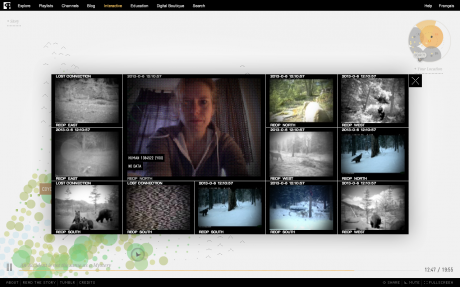 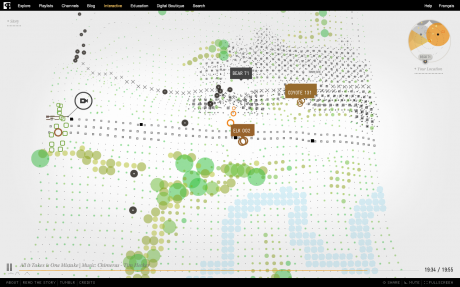 Launched at last year’s Sundance Film Festival with an accompanying installation, Bear 71 is a mesmerizing reflection on the power relations between humans, wildlife, and technology, and the emergence of new wired landscapes in Canada’s Banff National Park. Allison waded through large amounts of surveillance footage collected by the park’s authorities, and created a networked environment for users to navigate. You can click on the various trail cams to view elk, wolves, coyotes, and tourists. You can also see sections of railway and highway that fragment the wilderness. “Since 2000,” we are told, “17 grizzly bears have been killed in the Bow Valley due to railway fatalities. That’s counting six cubs who couldn’t survive on their own after their mothers got hit. It works out to approximately one dead bear for every five kilometers of track.” The track would eventually claim the life of Bear 71.

The film is narrated in the first person by a female bear, trapped, darted, collared, and tagged when she was three, and surveilled until her death 11 years later. Mia Kirshner’s flawless rendition of J. B. MacKinnon’s beautiful text gives a voice to the voiceless in the tradition of dead narrators. Dead narrators in film and fiction can be tricky. The device works here partly because of Bear 71’s digital afterlife: her lingering presence in the technological ether is akin to a haunting and compounds the film’s key questions about the subjection of non-human life to relentless observation, before birth, during their lifetime, and after their death. What observation yields is the realization that bear existence in the Canadian Rockies is under siege.

The documentary combines sections we must watch with free-roaming ones, culminating in the death of Bear 71 and the birth of a new cycle of surveillance: the capture and tagging of her daughter, Bear 107. The first directed segment is of Bear 71’s violent capture. She tells us, matter-of-factly, that the tranquilizer used to subdue her, Telazol, is manufactured by Pfizer, “the same people who make Zoloft and Viagra.” Many such ironies follow.

Billed as “one of the world’s premier destination spots,” Banff exemplifies the tensions between the needs of conservation, the reliance on human tourism, and the demands of an ever-expanding human population. For all the excitement that high-tech conservation and monitoring projects generate, the fact remains that human and non-human animals encounter each other on vastly unequal terms. In voiceover, Bear 71 explains:

My own home range is around a town called Canmore. Now, that town has doubled in size over the past decade, and it gets about five million tourists a year. … Think of us as refugees, I guess. There used to be grizzlies all across the Canadian Prairies, and now there aren’t any. Not one.

Human technologies increasingly encroach on bears and their technologies (the rubbing trees, dens, bears’ acute sense of smell). It’s hard to escape the impression that the chaffing of human against non-human world, each vying for survival and flourishing, bodes ill for bears and other wildlife. In Bear 71, human technology proves deadly for bears, and this reality in turn asks us to rethink the ethics and etiquette of the expanding reservoirs of wildlife imagery. 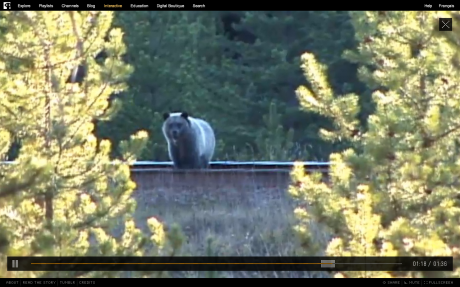 Not that Bear 71 is a Luddite antitechnology rant. Nevertheless, the film suggests that the receding life-worlds of animals become more and more something we see, but do little about. Abandoning technology is neither possible nor, perhaps, desirable. But technology must be considered with – and against – the flesh and blood of creatures and the power relations that bring us all into mutual play. What this work does is transform images of surveillance into images of witnessing, investing them with an ethical force for change.

Because as advocates we naturally focus on non-human animals’ right to life, violated second by second and on a colossal scale, we rarely think of something like animals’ right to privacy. Bear 71 links issues of privacy and visibility in complex ways that question the underlying assumptions of nonstop surveillance. We discover that observation interferes in animals’ daily lives, with potentially fatal results. But more than this, we are asked to consider our own desire to see – everything and all the time – as part of the problem. With the advent of new optical technologies – from high-end cameras to webcams to satellites – not seeing has become unacceptable. As if in the act of seeing, and being seen, the universe gives itself up to our all-seeing eye. But couldn’t not seeing be something other than a source of frustration?

Bear 71 is difficult to define. With elements of Greek tragedy, science fiction, wildlife documentary, and reality TV, this is a work that seems to speak to a certain technological mindlessness, to technology whose capabilities outrun any foreseeable purpose. It’s unclear precisely what is gained by so much visibility. We are desperate to see, to not miss a thing, as if seeing could dispel the last remnants of magical thinking that stand in the way of enlightened progress. But for all the layers of footage and the knowledge they provide, we still can’t decide on how best to live our lives, and how to let others live theirs. It’s not that we don’t know where we’re going – how could we know? – it’s that the very sense, and common sense, of a path is missing. “They can start a revolution on a smart phone,” the bear says, “but can’t remember to close the lid on a bear-proof garbage can.” 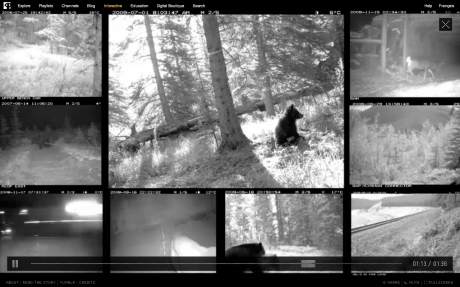 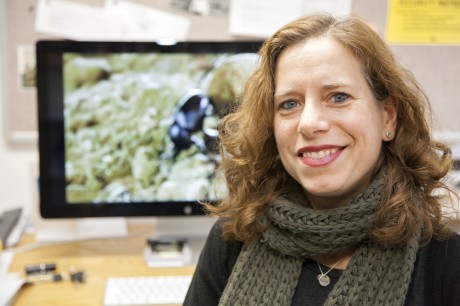 Anat Pick teaches film at Queen Mary, University of London, United Kingdom. She is the author of Creaturely Poetics: Animality and Vulnerability in Literature and Film (Columbia University Press, 2011) – check out OHH’s review – and coeditor of the forthcoming Screening Nature: Cinema Beyond the Human (Berghahn, 2013). Anat has published essays on animals in visual culture, and ethical veganism. Listen to Anat on Episode 117 of the Our Hen House podcast.