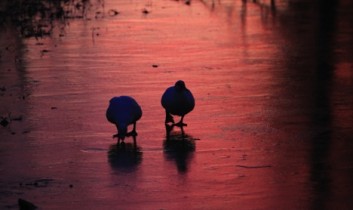 It thrills us beyond words to welcome to Our Hen House the brilliant photographer and animal advocate, Chris Taylor, whose work we have admired for so long. Chris is the force behind Wild Love Photography (which we once blogged about — because we love how she takes such glorious photos of animals, all from a non-exploitative vegan lens, so to speak). Today, Chris is bringing us an extremely special photo essay, which I know will move you (probably to tears) as much as it moved us.

For me, the Wakarusa Wetlands of Lawrence, Kansas is one of the most beautiful places on earth. The diversity of plants and non-human animals always lead to peaceful, fascinating, and surprising walks. No matter how often I visit, every walk is different. But I can always feel the history of the land. I am most aware of the connections among the people for whom the wetlands is a sacred space, the larger environmental concerns as wetlands across the country disappear to development, and all the beings who live there. 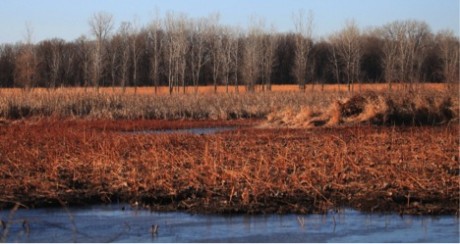 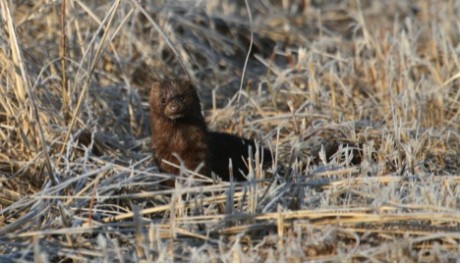 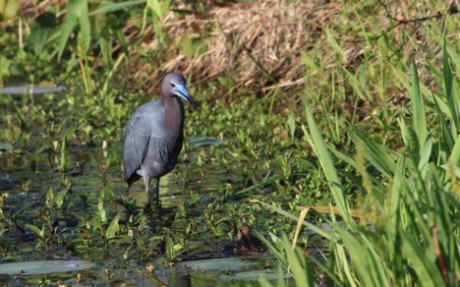 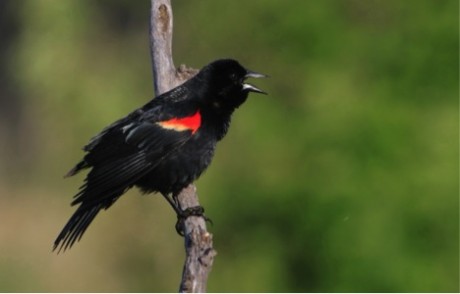 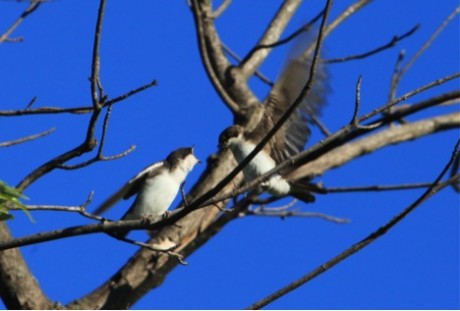 This is a story about two of those beings. One brisk November morning, I discovered two Muscovy ducks hanging around the main entrance. They were friendly, fluffy, and completely out of place. I did a little research and learned that, like many domestic ducks who are bought and sold as Easter presents or bred for their flesh and/or eggs, they are not equipped to live in the wild, would likely not survive sustained cold, and would not be able to fly long distances to reach warmer areas.

The ducks allowed me to get within a few feet while I scattered food, but took off when I came closer. Still, every morning for a month, they greeted me wagging their tail feathers and making soft, flute-like sounds. It was hard to leave. I began to feel like my presence was helping them have a chance for survival. But I had no long-term solution. I live in the city and would have nowhere to keep them if I rescued them. I was warned by several wildlife rehabbers not to call state or federal authorities because the ducks are considered an “invasive” species and would be killed. There’s no small amount of irony in some white folks deciding who is and isn’t invasive on this particular stretch of land, but we can save that discussion for another time. 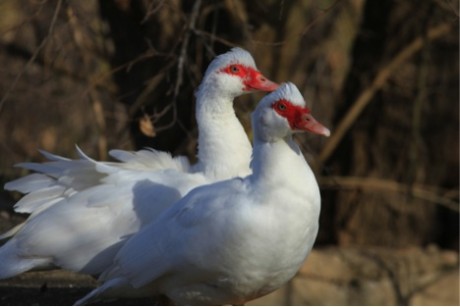 I wasn’t the only person trying to help these ducks. I had a friend who offered to relocate them, and a manager of the Baker University side of the wetlands told me of a possible home, one where they wouldn’t be eaten. He said he was going to put up a pen that could corral them, and he could get them to safety.

I bought two large nets. I told the manager, “We can get them now and I can help.” But though he said he was going to get the ducks that day, I saw little progress. Several days passed, and temperatures were dropping. Now the ducks were wagging their tails the moment they saw my car pull up. I wanted so much to be able to just ask them what I should do, what they wanted to do.

On some mornings, I saw coyotes in the distance and wondered just how long the ducks had before the coyotes discovered them. I imagine the ducks had chosen this entrance because it was close to the road, it had a small concrete bridge they could get under, and beneath the bridge was a beaver den that provided a bit of warmth. For two ducks who had no experience with the wild, they chose wisely. 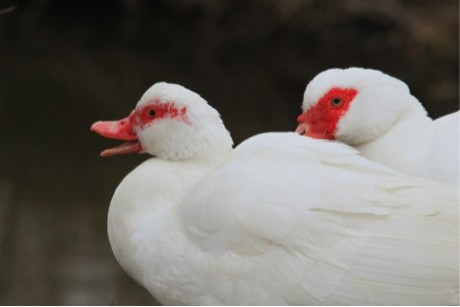 Another week passed. I reached out to everyone I could think of for help. The response was amazing. Judy Carmen, an extraordinary local activist, found a family eager to take them. Two days before Christmas, four of us showed up with my nets and boxes, but the ducks were now hanging out in the middle of some very thin ice. I think they started spending their nights there because the coyotes had found them and the ice was too thin for the coyotes to manage. We gave up and planned to try again.

On Christmas Eve, I went out again, but only one duck was on land where I could reach him. The other was on the ice. I really did not want to try and only rescue one, leaving the other to wonder what happened. They seemed incredibly bonded, often standing side by side, wings touching, sometimes grooming one another, making those soft, flute-like sounds. I called the family who offered to take them in and assured them that I would try again on Christmas. They were looking forward to the ducks’ arrival. 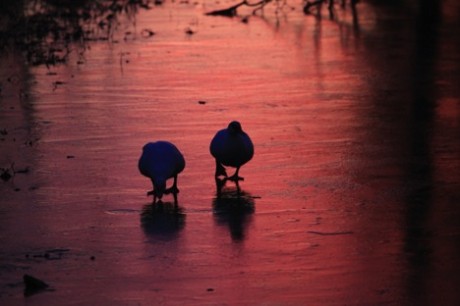 On Christmas morning, I could only find one duck. He would only poke his head out a bit from under the concrete bridge. I threw some food down on the ice so he could get to it without having to come up on the bridge. He came out to grab a few bites, and then quickly retreated. I thought perhaps if I could lure him out, I could lie flat on the concrete bridge, reach down with the net, and scoop him up, but he was not having it. Forcing back tears of frustration, I called the family. Margaret said, “You know, I have three fearless boys. Why don’t we come out and catch that duck before something happens to him, too?”

The boys went out onto the ice in their tennis shoes, each with one of my big nets. As if playing a bizarre hockey game, they tried to get on each side of the duck so one of them could get him in the net without hurting him; the rest of us lined the banks in hopes of corralling him. They missed several times, the duck sliding up and down the ice and flapping his wings. He really wanted to get back under that concrete bridge. The ice cracked in some places as all of us urged the boys to be careful. The duck flew back to his space under the bridge, and one of the boys quickly crawled under and grabbed him.

As I saw the boy struggling to hang on, something took over. I walked over to them and just took the duck in my arms. I was afraid that he would use his sharp toes on the boy or get away again, but I also needed to touch the duck, needed to convey to him in some way that I was trying so hard to find him a safe place. When I grabbed him, Margaret said, “Let her have him. She knows what she is doing.” I didn’t, not at all, but at that moment, somehow, I did. I talked to him, telling him he was going to be fine. One of the boys came over and tucked a wing under my arm so the duck could not get free. “It’s OK. You are safe. It’s OK.” I told the family that I would continue to look for the other one. After they left, I was exhilarated for a few minutes, and then incredibly sad that we could not find his mate. I walked along the channel looking for her for as long as I could.

For the next two days, I came back and walked the paths, left food, looked in brush, and looked at coyote scat, trying to figure out where she was. I was afraid she might be injured somewhere. On the third day, I had almost given up hope. As I pulled the car into the parking area, two coyotes came out from under the little concrete bridge. One of them had her. I jumped out of the car and went after them. I knew she was already dead, but I just had to follow them. I watched as the coyotes ate her.

Coyotes are not the most beloved animal. Sadly, they are hated and hunted, considered scavengers, a nuisance. It is even legal to hunt them from cars in Kansas. I knew they were starving and did what they needed to do to survive. Coyotes have to eat, too. While it was heartbreaking that I couldn’t rescue the second duck, I saw that her death was not a meaningless one. 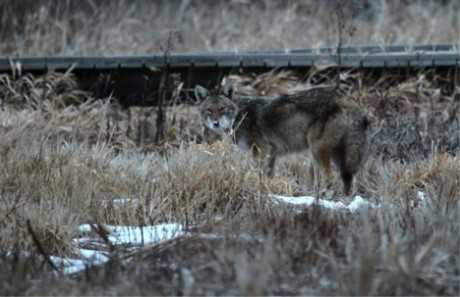 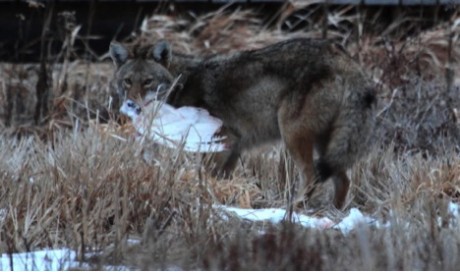 Margaret reports that the duck seems peaceful and is adapting quickly to his new home. Even after losing his mate, he is safe now with people who love him. I am forever changed by my relationship with these two ducks, their amazing attempt to survive in an environment they had no preparation for, and the people who came together to do everything possible to get them to safety. This experience not only reaffirmed my belief in the interconnectedness of social/environmental justice and animal rights, but it also reaffirmed my belief that theory without practice means nothing. Practice is activism. Even when things seem completely hopeless, a group of people can come together and make change. After I let people know the unfortunate fate of one of the ducks, my friend, Mike Caron, a long-time advocate for the wetlands, said, “To paraphrase that great philosopher Maurice Sendak, the wetlands is in the duck and the duck is in the wetlands.”

Chris Taylor is a vegan nature photographer, English professor, and volunteer vegan mentor for The Vegan Society. Chris lives in Lawrence, Kan., with her lovely partner, Mo, who is also a most amazing editor, and their two fabulous felines. To see more of Chris’s photography, visit Wild Love Photography.