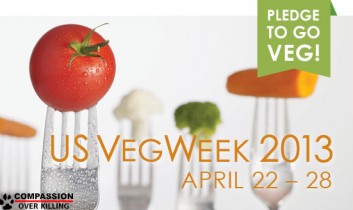 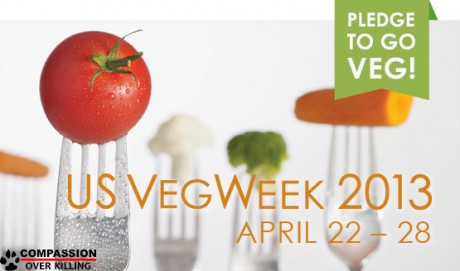 If you’re already vegan (which I’m going to guess you are), you might not feel that various vegan challenges or vegan incentives are applicable to you. To be honest, there are times when I also glaze over when they hit my radar, vaguely thinking that it’s super they exist, but recognizing that their audience is the vegan-wannabe club, not the vegan-for-a-decade club, the one I’m in (not that we should consider ourselves in any kind of club, but I digress). The thing is, though, I’m wrong in that thinking. Vegan incentives should very much be important to us vegans. They are key to reaching folks who are vaguely toying with the idea of going there. Incentives and campaigns like these often provide resources, tools, support, and mentorship — the kinds of things that most not-yet-vegans desperately need in order to be in it for the long run. This has been an important lesson I’ve learned: When effective and organized campaigns like these pop up, it’s our duty to share them far and wide. Our veganism isn’t about us; it’s about the animals, speaking up for them, and spreading veganism to everyone we’ve ever met in our entire lives (and a whole lot more).

Which brings me to US VegWeek 2013, a program of Compassion Over Killing, which is now in its fifth glorious year. Kicking off this year on Earth Day (April 22), US VegWeek is a seven-day celebration of all things vegan, largely centered around the seven day VegPledge, where they ask folks to go vegan for a week (to start with, anyway), with a special focus on elected officials and community leaders. During the week, participants receive vegetarian starter kits, recipes, coupons, and a ton of other resources perfect for everyone from the most rabid meat-eater looking to reduce his foodprint, to a long-time vegetarian hoping to take the leap to full-on veganism. There’s even incentives for people to join (aside from the obvious incentive of living your life in a continuum with your ethical beliefs, saving the planet, helping animals, getting healthy, yadda yadda): Those who pledge are entered to win one of hundreds of prizes from the program’s corporate sponsors.

In addition to doing our part by sharing US VegWeek with our social networking circles, our workplaces, and our friends and families, you might consider hosting a US VegWeek event in your community. I have always been a fan of massive grassroots campaigns where a heap of events all take place at the same time, helping our movement build momentum and power, mobilizing so many more people than we would if we were acting solely on our own (the wildly popular Worldwide Vegan Bake Sale springs to mind).

The US VegWeek, of which Our Hen House is a proud partner, launched in 2009 thanks to the inspiration of MD Senator Jamie Raskin, who took the seven day pledge, a pledge that turned into a lifetime commitment. VegWeek was then officially recognized by the city of Takoma Park, MD through a Mayoral Proclamation that makes my heart sing and my faith in politicians less dismal. COK expanded VegWeek to the entire state of Maryland in 2010, then to Virginia, DC, and California in 2011, and nationwide in 2012. That, right there, is successful campaigning. And it doesn’t happen by accident, nor does it happen with just the relatively small (and utterly amazing) team at COK. Everyone’s efforts are needed here, and passionate vegans and animal rights activists should be first in line to get the word out.

In short, here’s what we can do to help support US VegWeek 2013: