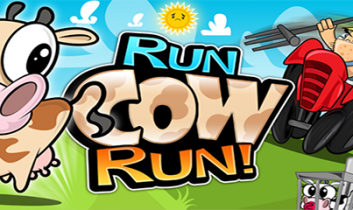 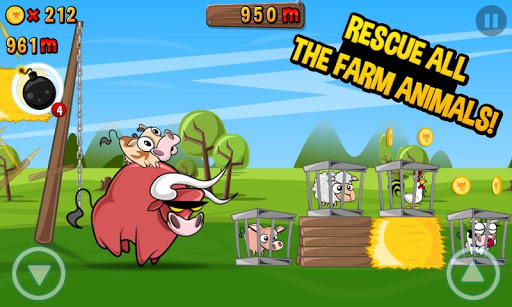 When I was a kid, I used to love Super Mario Brothers. I’m talking the original — Super Mario I, circa the late 80’s. I’m surprised I even had enough time in my life to listen to Madonna and search for the brightest neon pink a girl could find. There were few things better in life than racing through the Mushroom Kingdom and attempting (unsuccessfully) to save Princess Toadstool.

So when OHH columnist Keri Cronin emailed me asking if I’d heard of “Run Cow Run,” the new video game being billed as “the game the meat industry doesn’t want you to know about,” I paid attention. Keri’s email went on to say, “I downloaded it for my phone but had to stop playing it because I really suck at video games and, as such, the ‘evil farmer’ kept catching the poor cow who was trying to escape. I couldn’t live with the guilt!” And, with that, I was addicted (even if I was one of the last “animal people” on the planet to have heard of it).

The game’s producer, Bengigi, describes the story of Run Cow Run as such: “One day, the little cow realizes what happens to all of the farm animals and makes an escape for her life! While being chased by the vicious farmer, she rescues other farm animals from their cages and tries not to end up as a steak in the farm’s slaughterhouse.” 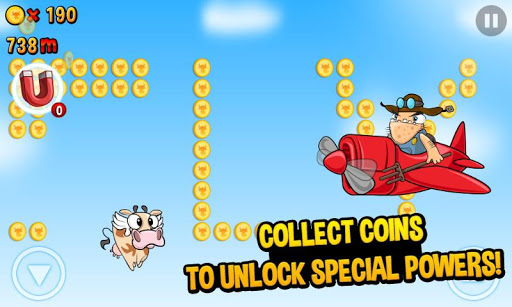 True to form, Run Cow Run is like a modern-day take on Super Mario I, complete with a jump button, a slide button, and an insatiable desire to play it over and over without stopping. As you rescue little cows from cages, your next step is to bring them to a sanctuary. You get points by collecting coins, and these points allow you to buy various powers. These include “Udder Power,” which lets you “squirt milk to drive away the angry farmer”; antibiotics, making you “unaffected by stabs from the farmer’s pitchfork”; and — for 5,000 points, the most you’re able to spend on one thing — the “Almighty Bull,” which is described simply as “a hell of a ride.” I personally haven’t yet gotten 5,000 points, so I can only surmise at what the bull does to the farmer.

I completely understand why Keri felt guilty. Any animal advocate playing Run Cow Run will be destined for at least a little failure, but hopefully only after liberating some other animals. So, if you die — which you will — at least you won’t have done so completely in vain. 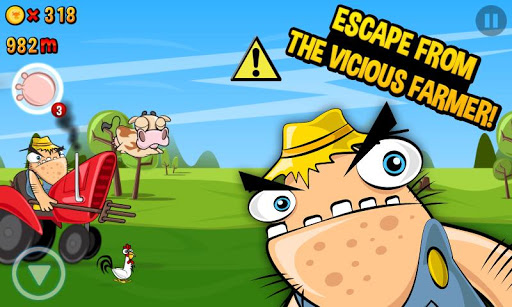 Needless to say, I’m officially obsessed, and thrilled that this game is out there. Though I’m not sure if it’s going to change the world per se, the more we can penetrate the mainstream with subversive, pro-animal tools like this, the better. I gotta hand it to the creators of Run Cow Run, too. They went there — to the place so many entrepreneurs won’t touch with a ten foot pitchfork. What if more creative types, designers, and business moguls followed suit?

And as I become nostalgic for that big tan box with red lettering — my first Nintendo — I cannot help but wonder, too: If Super Mario were trying to rescue a captive farmed animal, rather than Princess Toadstool, would my trajectory to becoming an animal activist have been speedier? You never know.