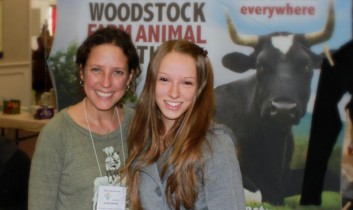 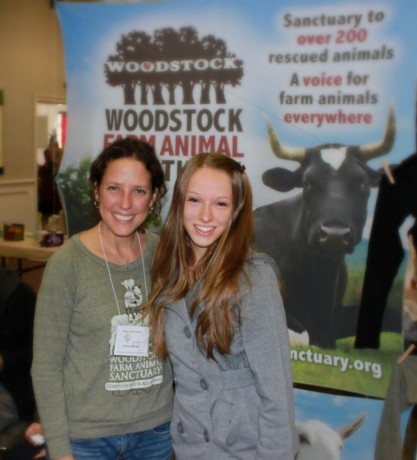 At first glance, the Facebook page for Dust Bunny’s Boutique appears to be about a sweet little gift shop, full of fuzzy, animal-themed tchotchkes. But when you look closer, you might find that the warm fuzzies you’re feeling have less to do with the vegan fabric on the kissing duck doodads, and more to do with Abby, the passionate 16-year-old activist and entrepreneur behind them.

When I first contacted Dust Bunny’s Boutique about covering their incredible project for Our Hen House, I thought that I’d wind up writing a short and sweet piece about some inspiring folks who make crafts and then use those crafts to raise awareness and funds for animal rights. Badda bing. There you have a highly replicable, artistic, and grassroots campaign.

I loved the concept, even before I got an email back. But when the extra long response popped into my inbox, I was concerned that I wouldn’t make my dinner meeting on time, so I figured I’d just glance at it, and read the rest later. No dice. As soon as I saw what Mary Jane Serfilippi had to say about her younger daughter Abby, I knew I’d be late for my meal. What I had initially presumed would be a spiffy piece for OHH on how “you too can create crafts with a conscience!” promptly wound up taking on a life of its own. It was clear that the article I had to write was not simply about crafting with a conscience. That’s because young Abby might be the most inspiring young activist I’ve heard about in a long time, maybe ever. This kid has gusto. Do yourself a favor and read her story….

When she was in fourth grade, Abby and her family bought a guinea pig — Muffin — from a nearby store in their hometown of Delmar, NY. Soon after, when she learned that other guinea pigs just like Muffin are often left abandoned, and are up for adoption at the local shelter, Abby was horrified, and took it upon herself to create a small campaign aiming to re-home those at the shelter. At one point, her family wound up with 22 of them.

But re-homing these animals wasn’t enough, because for all of the ones who had been given forever homes, countless others were still without one. So young Abby, already an avid craftster, received permission from her school to sell her creations at the school’s craft fair — the proceeds of which would benefit various animal sanctuaries and shelters. That was the beginning of an awareness- and fund-raising campaign which is now known as Dust Bunny’s Boutique, and these days, raises funds for a whopping seven animal rescue organizations.

Abby’s mom, the supportive and kind Mary Jane, told me that, “Over the past few years, Abby’s outreach has grown, and she has pursued many venues where she can sell her crafts and bring her message to the public.” The venues include a local bank, which, for the past two years, has allowed Abby to set up a display and sell her crafts for one month each summer. Plus, according to Mary Jane, “Abby has reached out to the Honest Weight Co-op, and was given permission to sell her crafts there during the Easter season, as well as at Little Anthony’s, Kleinke’s Farm Stand, the Village Animal Clinic, Gades Farm, Lil’ Buddha Tea, the Loving Cafe, and the Perfect Blend Cafe. She also sells her crafts at the St. Thomas Craft Fair, Holy Names Boutique Noel, and the Hamagrael Craft Fair.” Clearly, Abby is making quite a name for herself in her town, and bringing the animal message along for the ride.

100 percent of the proceeds of these sales benefit animal causes, including the Mohawk Hudson Humane Society, Animal Protective Foundation, Catskill Animal Sanctuary, Woodstock Farm Animal Sanctuary, Farm Sanctuary, various New York State wildlife rehabilitators — including North Country Wild Car — and, of course, the Critter Connection in Connecticut, which is devoted to helping abandoned guinea pigs. “To date,” boasts Mary Jane, “Abby has raised $5,553 from the sale of her crafts.” Dust Bunny’s Boutique is a “labor of love” for Abby, her older sister Jessie, and an understandably kvelling Mary Jane.

But the story of Abby the Animal Ambassador doesn’t end there. Let’s back up …

So, you already know that fourth-grader Abby bought a guinea pig, learned about the plight of these little darlings, and started a craft campaign to raise funds for animal rescue groups. Already, that’s more advocacy than most people accomplish in a lifetime — let alone in a few short years on this planet. But for Abby, Muffin the guinea pig was only the start, a first step in her life’s mission to change the world for animals. Muffin was simply the gateway drug.

“Abby’s desire to help farm animals began four years ago,” Mary Jane told me. “After viewing a video revealing the brutal treatment to animals used in the fur industry, and coming to understand the unfortunate mistreatment of industrial farm animals, Abby made a personal change in her life. She knew the most effective way to help the animals was to become one less consumer of the meat and dairy industry and to adopt a plant-based diet.” After changing her diet — which, let’s face it, is not always the easiest feat for a middle-schooler — Abby continued to dig deeper, quickly learning about the animal oppression that’s inherent in the clothes we wear and the products we consume. She became a bona fide vegan, and an outspoken one at that.

“In seventh grade,” her mom continued, “Abby volunteered to participate in the St. Thomas Brenda Deer Memorial Learning Fair. She wanted to share with her fellow students what she had learned about factory farming. She made a display with posters and pictures and had informational pamphlets for people interested in learning more about factory farms and changing their diets. She even had a sign-up sheet for people to volunteer to try ‘Meat Free Monday.’ The response was very positive and convinced her to keep spreading her knowledge.”

And so, Abby then took it upon herself to set up a display at the local library, educating the public about factory farming. She was then given the green light to use this subject as the topic for her eighth grade service requirement. That was all Abby needed to reach out to Catskill Animal Sanctuary founder Kathy Stevens, who came to talk to Abby’s school about factory farming and the role of sanctuaries, as well as read from her book, Where the Blind Horse Sings: Love and Healing at an Animal Sanctuary.

“That spring,” said Mary Jane, “Abby created and hosted an event at her school called ‘A Feast for St. Francis,’ where vegan chef Kevin Archer and education coordinator Betsy Farrell-Messenger, from the Catskill Animal Sanctuary, came to the school on a Saturday and gave lessons in vegan cooking, talked about the health benefits of a plant-based diet, and also shared many wonderful stories of the rescued farmed animals at the sanctuary.” Abby’s event also included age-appropriate educational videos (which Abby selected), information for how to eat optimally as a vegan, and an assortment of recipes to please both the palate and the conscience. There was even a raffle that benefited the life-saving work of Catskill Animal Sanctuary.

Mind you, all of this was going on at the same time as Dust Bunny’s Boutique, which was gaining popularity within the community, and raising more and more funds to benefit animal charities. The information provided at Abby’s craft tables now expanded beyond just guinea pigs, and included farmed animals as well, and plenty of reading material about veganism. “When Abby entered her freshman year at the Academy of the Holy Names,” said Mary Jane, “she received permission to incorporate her work for the animals into her service requirements for her [new] school. Her first accomplishment was to gain approval to wear a non-leather shoe in place of the required leather one.”

Mary Jane is continually inspired by her daughter, so much so that, in 2011 — two years after Abby graduated from St. Thomas the Apostle School — Mary Jane started the St Francis of Assisi Scholarship, which is given to a seventh-grader who demonstrates a strong regard for animals. “We wanted to keep Abby’s mission of compassion for all animals alive at the school, and decided a scholarship could do this,” explained Mary Jane. The $200 scholarship, which is donated from Mary Jane’s personal funds, goes toward the student’s tuition.”Each year, students write a paragraph answer to a question we ask them about animal rights. We go through the entries and select a winner.”

This story leaves me all sorts of verklempt. What strikes me most is how the outpouring of community support has helped to buoy the drive and passion of a young girl with a mission and a determination to end the exploitation of animals. The kind of mass social change that Abby is looking to achieve begins with one person’s courage to face the truth — hard as it is — and commit to changing the shape of things. That brave force was young Abby, who — even as a fourth-grader — refused to look away. But the takeaway here is twofold. Because in addition to finding loads of inspiration from this kid (much of which is replicable, so hopefully you’ve been taking notes), I am also reminded of the power of community support. Abby’s school, her local library, her family, her friends, and various businesses in her area all rallied behind her altruistic efforts, providing a solid foundation with which she could get across her message. I am as inspired by Abby’s community as I am by Abby.

At Our Hen House, we like to think that we are “indefatigably positive.” We focus on opportunities and ideas for changing the world for animals, even though, at times, we indeed feel the despair. As I write this, as I delve into the story of one young girl who will stop at nothing to raise awareness about the plight of animals, I am reminded of what positivity really means. Like you, like me, Abby has felt that gut-wrenching sadness when faced with what goes on for animals behind closed doors. But she also sees true goodness in people — otherwise she wouldn’t be persevering so selflessly and relentlessly. She wouldn’t be making crafts with her sister and her mom and selling them in order to help animals in need. She wouldn’t be taking a stand against wearing the leather shoes that are supposed to be part of her school’s uniform, and implementing new policies of compassion.