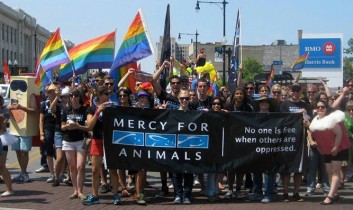 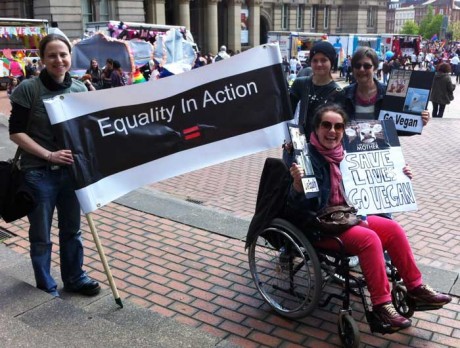 I just had to share an email from two Our Hen House readers in England who spent this past weekend advocating for animals in a way that just may inspire you. Amy Dougherty and Sally Thompson, told me that they “took veganism and equality for all to the streets of the city.” As the Birmingham Pride Parade celebrated equality, Sally and Amy were among a passionate group of animal activists (from Equality in Action) who marched behind signs saying things like “Live Equality — Go Vegan!” and “Save Lives, Go Vegan.” According to Sally, 75,000 onlookers watched the festivities.

Bringing the animal rights message to Pride parades may be more common here in the United States than it is in the United Kingdom (though something tells me it’s caught on!), thanks largely to the tremendous advocacy efforts of Mercy for Animals, which has long been using the platform of such parades to speak up for animals. MFA is easy to spot at Pride parades and gay rodeos, marching behind a banner that says “No One is Free While Others are Oppressed.” MFA founder Nathan Runkle eloquently spoke about MFA work in this arena, and on the connections between gay rights and animal rights, in a video we produced entitled “The Gay Animal.” This year, MFA will have a presence at LA Pride on June 8 and 9, Portland, OR’s Pride Northwest on June 15 and 16, Columbus Pride on June 29, Chicago Pride on June 30, NYC Pride on June 30, and several other Pride events throughout the country. 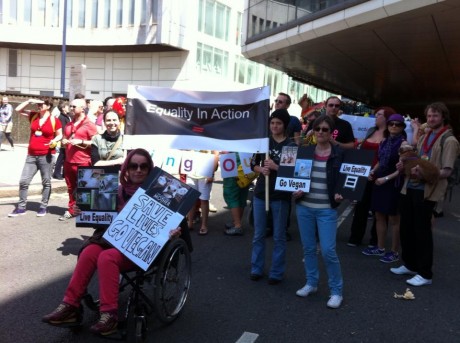 Even if MFA isn’t planning a specific presence at your local Pride event (if, that is, your town has one), that shouldn’t stop you from representing! As I wrote about a few years ago, I’m a fan of wearing vegan messagewear to any kind of social justice event or parade. And, of course, I carry leaflets with me that speak up for animals, and I hand them out to anyone who will take them. At Pride parades, most people are more than happy to grab some reading material for later. This is especially true for vegan recipe brochures. Inexplicably, people will rarely say no when you give them a big smile and say, “Free recipe guide?” Of course, most vegan recipe guides include a blatant “Why Vegan?” section, explaining the plight of animals and the tastiness (and necessity) of veganism.

We already know the countless overlaps between social justice movements — both in terms of the danger of “othering” and in the beauty of liberation and equality. As the weather gets warmer, make a commitment to attend some of your community’s public events, and to give animals their due time. While you’re at it, you might also challenge yourself to pick up a leaflet or two that someone else is handing out. Share the pride.

The following articles might also be of interest to you: “LGBT Vegans Unite”; “Coming Out for Animal Rights“; “More Bridges“; “No One is Free …“; “Flamingo Pride“; “Nathan Runkle: The Gay Animal.”