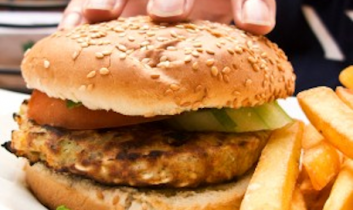 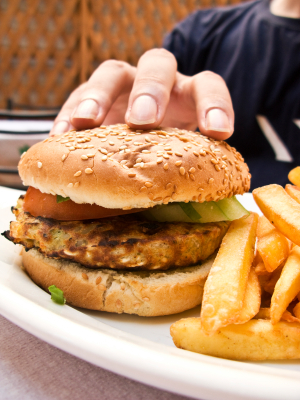 Burger places seem to be popping up everywhere. For a while we were back to the ‘80s with frozen yogurt chains appearing on every other block, but lately it’s burgers. In my Brooklyn neighborhood I counted five new burger joints in the last year. Five. Has no one gotten the memo about how red meat is bad for you?

But these new places have a twist: they offer vegan patties. The vegan offering from the burger joint closest to my house tends to be soggy, but without it there would be zero entrees I would eat at that establishment.

So what do we think, vegans? Is the addition of animal-free patties to burger menus enough to get us in the door?

On the whole, I say yea. Would I ever choose to eat at one of these glorified McDonald’s if I were by myself? No. (And it’s not because I don’t like eating alone – I love it. I can read, eat as slow as I want to, and not share my dessert.) But I could certainly see meeting up with some flesh-eating friends there. (Huh. Calling them flesh-eating makes them sound kind of like zombies. And in a way, in the sense of insisting on eating the living, consequences be damned … well, that’s enough; these are my friends we’re talking about.)

I wouldn’t go to a hamburger restaurant alone or with other vegans because the place smells like a crematorium; I’d have to watch lots of people ripping into carcasses with their teeth, masticating, and ingesting the resulting glob of horrificness; and depending on the location, as mentioned, the vegan option may be soggy.

Still I say yea. We should support these businesses, and that includes patronizing them, because they are good for our goal.

Veganism can be different things for different people. Some choose it for its proven health benefits; others believe that eating the meat of an animal who was stressed and terrified and full of adrenaline when killed is bad karma. Some understand that factory farming is destroying our climate and wiping out other species and are doing their bit to save our planet.

But most of the vegans I know consider their refusal of animal products as a boycott, with the goal of ending the exploitation, torture, and execution of billions of animals. We are using economics. We are reducing demand for the animal-based products companies sell, and by reducing demand, we cause a reduction in supply.

The vegan patties at the new Burger Bistro, or Big Bucks Burger, or whatever it’s called, represent a diminished supply of meat. It used to be that 100% of the burgers these kinds of businesses sold were made out of animals’ bodies. Now the percentage is less than that. Some fraction of that meat has been replaced by plant products. Some number of cows (or bison, or whomever they’re putting in fancy hamburgers these days) weren’t bred or slaughtered because some number of people would not eat them.

That’s us, friends. We’re the people. We are reducing demand by taking ourselves out of the meat market.

The businesses that are responding by reducing the supply of meat – those are absolutely the places where we should eat. Reward restaurants that serve vegan food, even if everything else they serve is meat. No, especially if everything else they serve is meat (of course that doesn’t require turning our backs on our true loves – the all-vegan restaurants; more on those later). Positive reinforcement will help these establishments learn that serving not-meat is good and right and profitable. We have to make sure it’s profitable. If we aren’t eating those vegan patties, they will disappear from the menu and be replaced by more meat.

There are a couple of ways that these restaurants provide savvy activists with opportunities to reduce demand for corpses on buns even further. One is taking flesh eaters with us to eat from the integrated menus. The other is talking up the vegan options to the locals.

Going out to eat with non-vegan friends and family can be a pain in the ass, but it can also be a chance to open their minds and broaden their palates. One option is to take them to all-vegan restaurants. This is always my first choice, and more particularly, any member of the New York City Blossom franchise tops my list. (Confidential to Blossom: how many times do I need to mention you online before you open a Park Slope location? Call me – we’ll meet and work something out. Bring Butterfinger shakes.)

The reason it’s my first choice is that a vegan restaurant is where I, personally, want to eat. That’s where I go when I’m dining alone. I can have anything on the menu, and the place doesn’t smell like an abattoir. Plus I can whip out my Woodstock Farm Animal Sanctuary membership card and get 15% off if it’s a Blossom location. (That counts as a separate mention, right?) If I can get my personal flesh eaters, I mean, friends, into a good, solid vegan restaurant – you know, your Candle 79, your M.O.B., your Millennium if you’re a left-coast type, your Chicago Diner for the Midwesterners – they may start, on occasion, to order the vegan option when they’re at their regular dining spot.

But omnivores can be resistant to eating at all-vegan establishments. If I take them to the ambidextrous burger joint instead, they can order their usual but have just a bite of what I’m eating. They’ll be in their comfort zone, more receptive, not looking around nervously lest radicals sneak up and throw red paint on them (not that that ever happens at Blossom). (That’s Mention #3.) As long as I avoid the place with the sorry-ass soggy vegan offering, I have a chance to surprise them by how good vegan food is. I will taste it before they do and have a chance to prep them: “This tastes nothing like a hamburger, but it’s good. It’s got a nice nutty flavor, especially with the mustard.” Maybe next time they’ll want to try what I’m having again. Eventually maybe they’ll order something vegan of their own volition. Now look what they did: they lowered the demand for meat by one more meal.

Vegan activists should also talk up these new establishments to potential patrons. This is a low-effort way to go. (1) Mention how good the vegan burger is. (2) Recommend that they try it. (3) Exit stage right.

Because of vegans and vegetarians, burger joints have started to serve non-meat options in place of some meat. We have lowered the demand for meat and increased the demand for non-meat. In response, these businesses have decreased the supply of meat and increased the supply of non-meat. Vegans can further alter the demand and supply by getting our non-vegan nearest and dearest to order non-meat. If that means eating one meal at a restaurant with a menu that features a drawing of a cow urging you to eat part of another cow, take it for the team. When it’s all over you can wash the whole experience away with a Butterfinger shake.