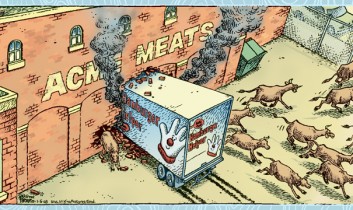 Today, we welcome Katrina Donovan Fleming back to Our Hen House. Katrina – a passionate third-grade teacher, animal advocate, vegan, and writer – is facing a quandary that anyone who speaks up for the underdog can relate to: When is it appropriate to fight back when everything we stand for is laughed off and turned into nothing more than a punch line?

Humor is a powerful force. 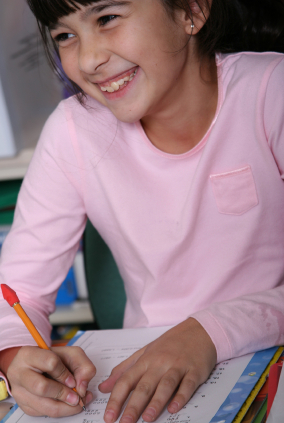 While humor has always come naturally to me in the classroom, jokes never have. And my students love them. With that in mind, I ordered a large joke book for our room. I skimmed the pages with a smile, anticipating how the kids would enjoy the silliness, and I was pleased to note that an entire section of the book was dedicated to animals. What an unexpected bonus!

I placed the book on my teacher shelf away from malleable young minds, so that I could choose jokes that didn’t base the punch line on animal abuse. But even out of sight, the jokes haunted me, and I continued to turn them over in my head. Each masked the horror of what we do to animals with a cutesie play on words. But beyond the obvious violence behind them, what was it about these jokes that I found so unsettling?

In fact, they were classic examples of a type of humor that has always been popular, and has always done harm. They were exclusionary. They were meant to separate us from them. Someone is the loser, the one we laugh at. And to add insult to injury, they were aimed at kids – the people who tend to be the most empathetic toward animals.

In my mind, true humor is inclusive. Not in a goody-two-shoes way. But in a refreshing release that makes us laugh at our own shortcomings. Ellen DeGeneres is a whiz at this kind of humor. Nobody is put down or excluded. Instead, she light-heartedly pokes fun at herself, the silly little quirks we all share, or the odd things we encounter in our daily life. (In one of her popular sketches, she ponders, “Do we still need directions on the shampoo bottle? … And it’s not bad enough that there are directions – there’s a 1-800 number on the back. In case the directions are too vague for you.”) All the guests who come on her show look relaxed, knowing they are safe from cheap shots. Ellen’s success and popularity speak volumes on the type of humor that attracts people. Such humor is cohesive, reminding us that we are on this ride of life together.

Exclusionary humor and its acerbic aftertaste are nothing new, of course. Think of all the jokes that are based in racism. The dumb blond jokes. Anti-gay jokes. This type of humor is a not-so-subtle way of communicating to one’s companions: “We’re better.” It is still cohesive, but it relies on casting others out of the group in order to create that feeling. Inclusive humor doesn’t depend on such base tactics.

The real zinger of exclusionary humor, of course, is that no matter how diplomatically one speaks against it, the perpetrator can retort in a passive-aggressive way, “Jeez. Have a sense of humor. It’s just a joke!” The person questioning the hurtful nature of the jab has now committed the great sin of not having a sense of humor. It’s actually a genius ploy on the part of the jokester, however unintentional or subconscious it might be.

So what do you do? When your sister-in-law quips that she’d like her steak cooked so rare that “it’s still mooing” and then glances to observe your reaction? Or when your son gleefully asks, “How do you make a milk shake?” (“Give a cow a pogo stick!”) Sometimes the solution will be obvious. More often, though, you will feel like you are in a minefield where one wrong step will make your efforts to speak up for animals seem petty and humorless.

Perhaps, though, the famous words often attributed to Mahatma Gandhi can give us some perspective on where we stand in the big picture: “First they ignore you, then they laugh at you, then they fight you, then you win.” Even though I tucked it away on my shelf to shield my students (and myself) from its potential harm, I knew the joke book was proof that people still go along with the idea that it’s okay to laugh at animals and at those who care about them. 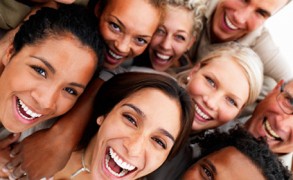 My mother, who worked in graphic design in the 1960s and 1970s, once remarked to me that the TV show Mad Men’s portrayal of businessmen making lewd jokes about women was alarmingly accurate. Women fumed at the injustice of such treatment and of being labeled as militant, humorless “women’s libbers” if they spoke out against it. As confident as they were in their convictions, many women wondered, “Will things ever change?” Now women can win lawsuits against such harassment. No laughing matter now, is it?

I used to wonder if my gay friends and family would ever escape the barbed jokes of society. It’s slow going in some areas of the country and world, but the change is startlingly rapid in others. Making homophobic jokes can now elicit disdainful reprimands. The power of the “it’s just a joke” line is quickly ebbing.

And, even though it seems like we – those of us who want animals to be treated with respect and compassion – have a long, long road ahead of us, things are changing for animals, just as things changed, and are still changing, for other victims of injustice. Our job now is to think about how to manage those uncomfortable situations when a distasteful joke is shared. Perhaps a shrug of the shoulders and a “Can you please pass the Field Roast?” is all that is needed to remind the jokester and other diners that your delicious vegan food is getting gobbled up much faster than that sad little plate of animal meat.

Maybe pulling someone aside to share our thoughts can be more effective. “Look, I know you meant no harm by that comment and you were just kidding around. But you are a sweet person and I feel strongly that if you saw that many cows are, in fact, still mooing when they are slaughtered, you’d be as upset as I am about what is done to them.” This kind of plea doesn’t state that the person is a schmuck, but focuses instead on how such a joke makes you feel, while educating them on the reality of what is happening to animals. It gives this person the benefit of the doubt that if she knew the truth, her thoughts on the matter would change. And whenever she hears that prevalent “mooing rare steak” comment in the future, the image of that slaughtered animal will be forever linked in her mind, much as she might wish it away.

In talking to children about a grisly animal joke, we must be sensitive to their newfound pride in developing a sense of humor. Humor is actually a very advanced aspect of learning language, and an integral part of brain maturation. I like sharing an animal-friendly joke with the child first: “Why do fish live in saltwater?” (“Because pepper makes them sneeze.”) Then I can casually follow up with, “Say, where do you think milkshakes (or beef, eggs, etc.) really do come from?” It’s a great way to allow a developmentally appropriate conversation on animal production to unfold. The child doesn’t feel chastised, but intrigued.

The key, it seems, is to remember that there is probably a kind soul behind the offending joke, and to then connect to the person on that level. Very few people would actually find animal abuse funny. If you can plug into that, share some food for thought, and give the person the benefit of the doubt, incredible things can result. It might just be a seed. But simply look at a forest or a thriving garden to see where a tiny seed can ultimately lead.

“It’s just a joke.” The truth is, if people have to state that tired line, then it’s not just a joke. There’s something lurking behind it, and deep down they know it.

Humor is powerful. It can be used to pull us together in a feel-good moment, or it can separate us in bully-versus-victim way. The former method, though, is the one that survives the test of time. And if we continue to participate in inclusive humor – as cartoonist Dan Piraro does so brilliantly – and politely turn our backs on the exclusive humor, then, to paraphrase that often-quoted wisdom, we ultimately win. 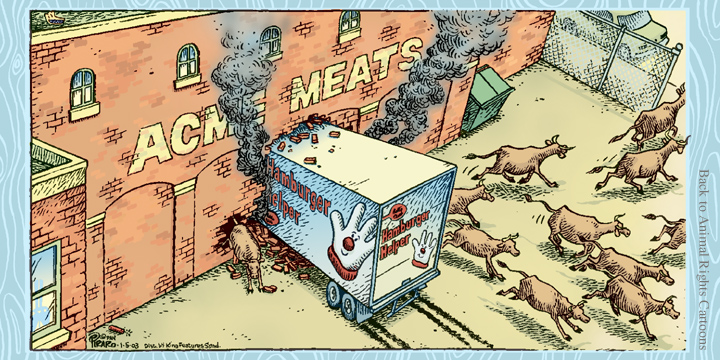 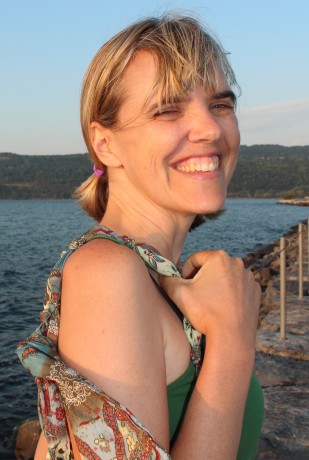