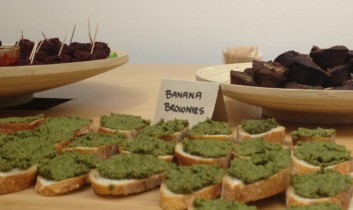 We are lucky ducks — er, hens! Last night, Mariann and I had the great fortune of attending the launch party for vegan chef Jenné Claiborne’s newest undertaking, the 21-Day Vegan Blueprint — an online coaching program for all the vegan wannabes out there who need a little nudge and a whole lot of support. In 21 days, Jenné promises to help her clients achieve “weight loss; abundant energy; improved digestion; kitchen confidence; better mood and sleep; lowered risk of heart disease, diabetes, and cancer; and a happy belly.” Her focus is on whole, unprocessed foods (“no processed vegan soy dogs here”), and — as I can attest from sampling what was perhaps more than my share of her concoctions last night — it will leave you with a pleased palate, too. The 21-Day Vegan Blueprint includes recipes (nothing with more than 10 ingredients), meal plans, cooking videos, resource guides, audio recordings, expert guidance with live Q&A calls, and access to a private Facebook group.

I am always thrilled when a new vegan business pops up — especially one that inspires people to bite the bullet and try plant-based on for size. In this case, the bullet is likely made out of beans. “When I became vegan,” Jenné explained last night to a roomful of eager hipsters, journalists, and foodies, “it completely changed my life.” It’s that exuberance for plant-based concoctions that Jenné wants to share with her clients, which is why the 21-Day Vegan Blueprint is, as she explained it, an accessible, step-by-step guide for new vegans. “I’m able to share my passion with people all over the world, thanks to the Internet,” she continued.

The program will normally set you back $77, but to celebrate its launch and encourage folks to join, Jenné is offering an “Early Bird Special” where you pay just $57 if you register before Midnight EDT on September 4.

I must say — that is a steal. I ditched all animal products a decade ago, and the vegan landscape since then has changed immeasurably. The three things I desperately needed at that time were a vegan community around me, a mentor who was able to answer my newbie questions, and some easy recipe ideas. Thankfully, I was lucky enough to find those things on my own, but for most people (such as those who don’t live in New York City or another big city), that can be hard to come by. That’s one reason of many why I am tickled pink about the 21-Day Vegan Blueprint. Much like Colleen Patrick-Goudreau’s 30 Day Vegan Challenge, this makes a perfect gift for the vegan-to-be’s in your life, or perhaps even for a struggling vegan you know. It provides all of the hand-holding needed for both new vegans, and — as Carol Adams calls them — “blocked” vegans. To be honest, even though I’m neither a new vegan nor a struggling one, I myself would still be very intrigued to participate. That was evident to those around me last night, as I basically gobbled up all the hors d’oeuvres I could get my hands on — all of which were based on recipes from the Blueprint program. These included Kale Polenta Fries, Banana Brownies, and a raw Peach Cobbler that Jenné effortlessly and charmingly demonstrated making. (Though you can use any kind of nut in the recipe, Jenné insisted on using pecans because “it’s a Southern thing,” she beamed. The woman is adorable.)

The launch was held at the chic space used by Farmigo — a “community-oriented food system in which people and farmers in the same geographic region are connected, and everyone has access to fresh-from-harvest food” — located in the too-cool-for-school Brooklyn neighborhood of DUMBO (which is a fifteen minute walk from the nearest subway, just FYI). In addition to Farmigo, the event was sponsored by my newest favorite drink company, Kombucha Brooklyn (just, get over the fact that it’s made out of fermented cabbage — this shit is good). In addition to Jenné’s delectable food samples — and the I-guess-I’ll-have-just-a-tad-more kombucha — also on hand was wine from Vegan Vine (remember when OHH’s Liz and I somewhat tipsily reviewed it on Episode 176 of the Our Hen House podcast?), and Raw Generation — a new juice company located in Long Branch, NJ (their green juices are quite tasty — not at all over-the-top greeeeeen like some of the other companies I’ve tried, but not overly-sweet either). And the goodie bags were among the best I’ve received at an event, and included exfoliating sugar scrub from Metropolis Soap Company, a Pilates DVD (that I will try!) called Form Pilates: The Beginner Mat Series with Lindsay Lopez, and yummies like soft dried mini figs from Fruit Bliss (admittedly, I ate these on the subway ride home — I was tired and hungry from my long walk to the subway), gourmet Indonesian cashews from Nuts + Nuts, and a mint-flavored “clean energy” drink from Runa. A second goodie bag contained a fresh nectarine, blackberries, and raspberries — along with a sample recipe from Jenné for Nectarine Miso Berry Salad.

In the past, I have been told that I’m jaded and difficult to please. Though I don’t believe that’s true, I will say that I am not easily impressed — but last night’s food blew my mind.

But perhaps even more than the food itself, the evening is best encapsulated by a conversation I overheard when we first arrived. Two guys were chatting about how delicious the food was, how easy it seemed to be to make, and how lovely Jenné Claiborne was. “Veganism,” one said to the other, as if he had decided which movie he wanted to see. “I could do this.”

Here are some photos from last night’s festivities: 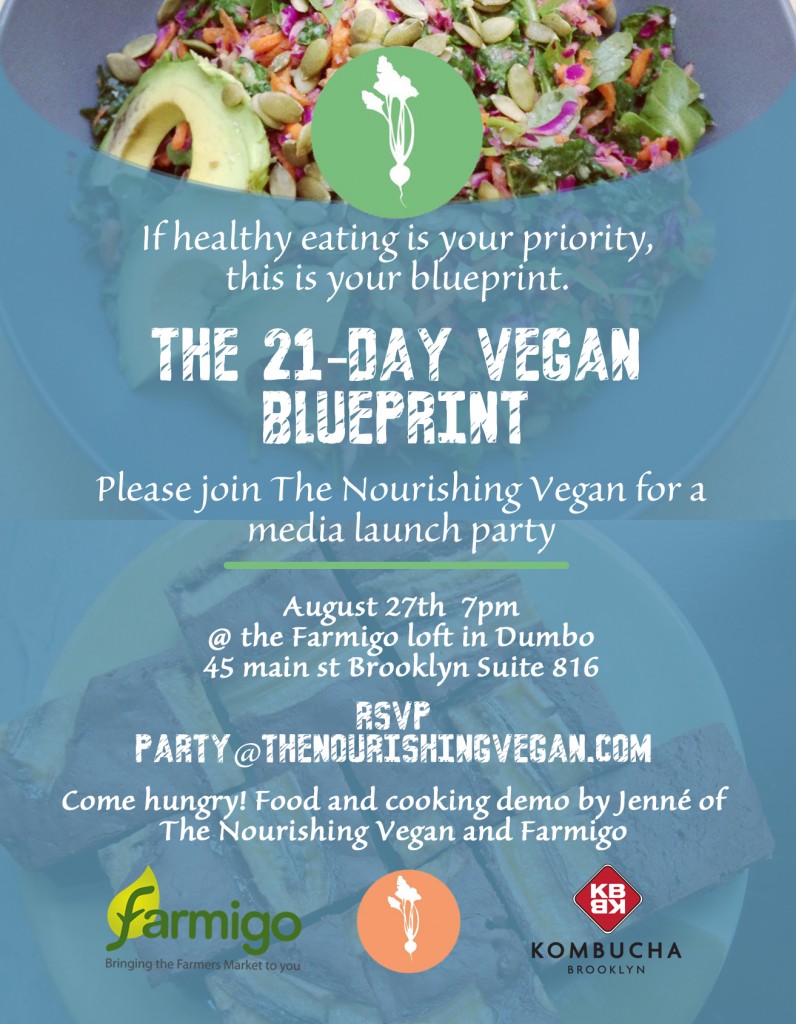 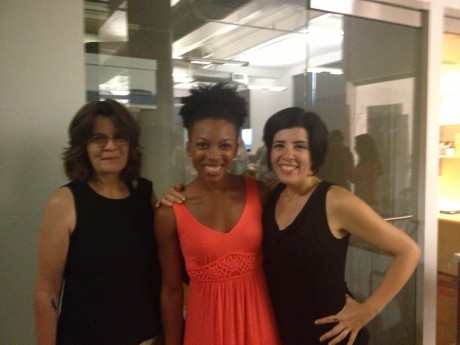 Mariann, Jenné, and me 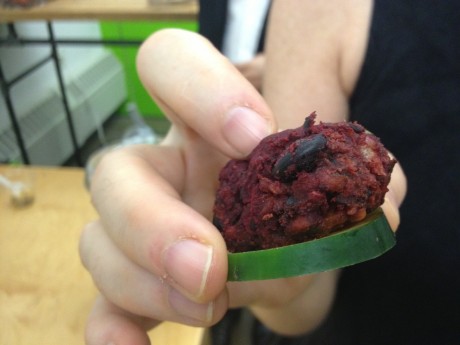 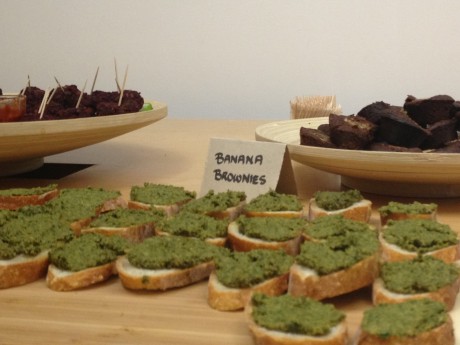 In the front is some of the delicious pesto that was served last night. In the back are scrumptious and healthy banana brownies. 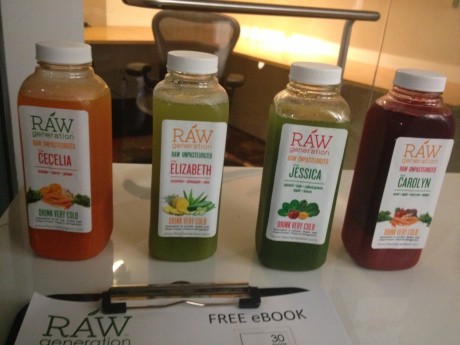 Raw Generation makes delicious juices. They were handing out samples. 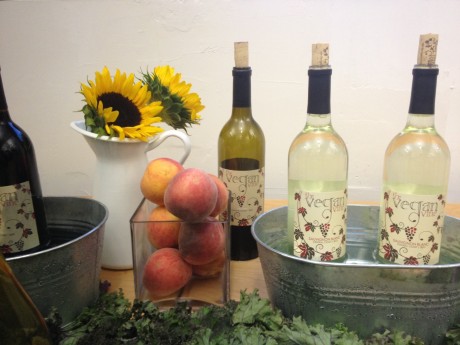 I love the Vegan Vine wines in inappropriate ways. 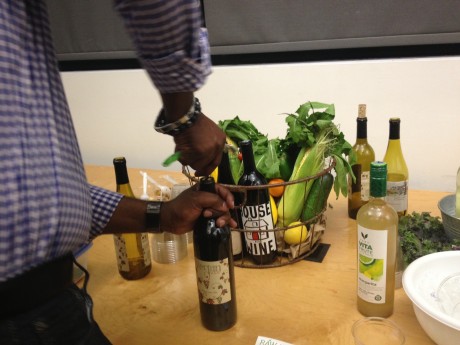 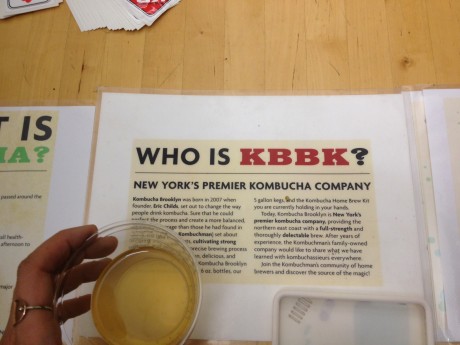 I had my share of Kombucha Brooklyn, too. Love that stuff. 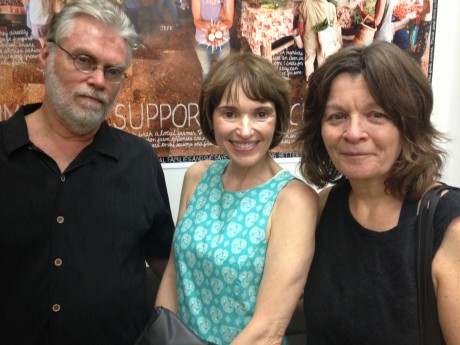 We ran into our friends William Melton (left) and Victoria Moran (middle) — there’s Mariann on the right. (BTW, yep, it’s that Victoria.) 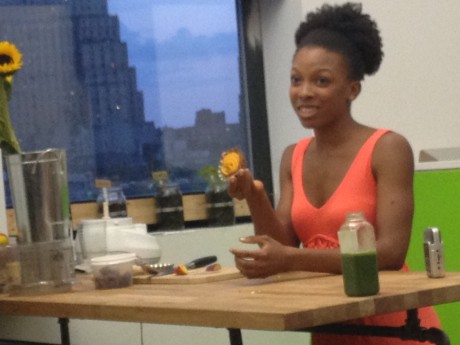 Jenné was a master at the cooking demo she did! The Blueprint program includes cooking videos, which — after seeing her style — I’m certain are superb. 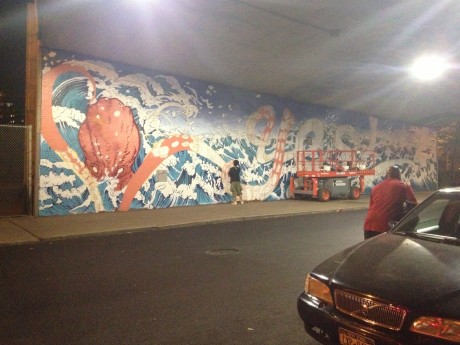