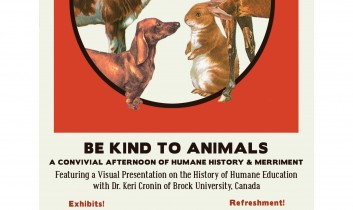 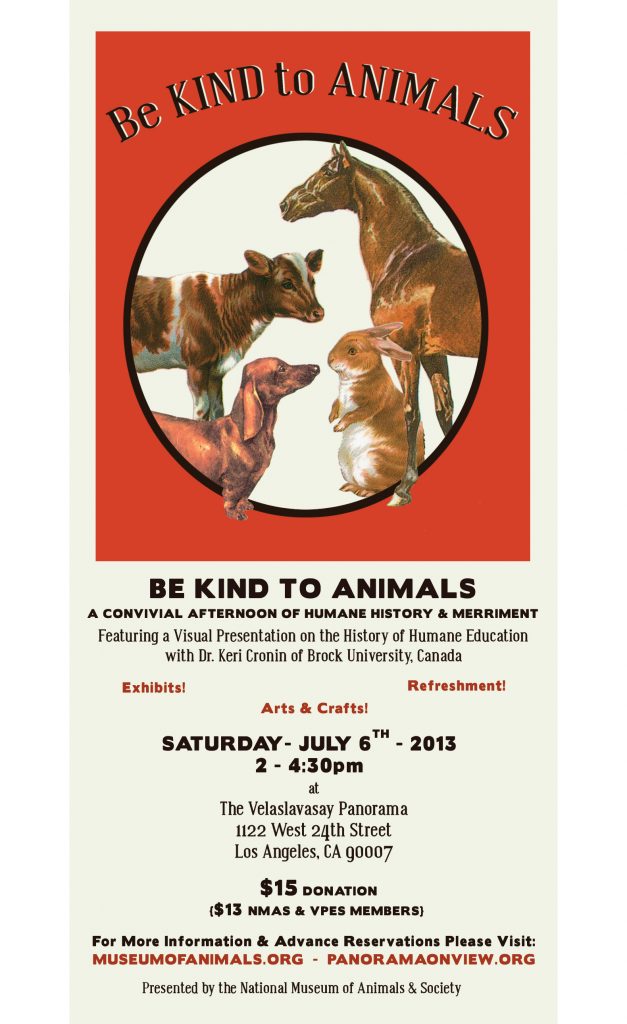 On Saturday, July 6, 2013, I gave a talk at a special event organized by the National Museum of Animals & Society (NMAS), an occasion billed as a “Convivial Afternoon of Humane History & Merriment.” The event took place at the incredibly cool Velaslavasay Panorama in Los Angeles, a location that honors the pre-cinematic history of visual culture. In addition to my talk, this event featured an exhibit of early humane education posters (many of which are highlighted in the exhibit I curated for the NMAS last summer called “Be Kind: A Visual History of Humane Education”). Attendees also had the opportunity to make some animal-friendly crafts, including catnip toys for shelter cats and bird feeders made out of pinecones. Crafts and activism in one location? Sign me up!

Given the tone of the event, I wanted to be sure that my talk had something for the young and young at heart. I decided to end with a look at cartoons used to teach children to be kind to animals in the early 20th century, including a 1935 episode of Popeye called, appropriately enough, “Be Kind to Animals.”

The episode opens with Popeye and Olive Oyl enjoying a day at the park, feeding the birds. This peaceful bliss is soon shattered, however, when Popeye’s archenemy, Bluto, comes on to the scene driving an overburdened horse-drawn cart. The poor horse is clearly exhausted, but Bluto whips him to keep going. When Bluto and the horse come upon a water trough (something that animal advocates in the late 19th and early 20th centuries often lobbied to have on public streets), Bluto prevents the horse from drinking and, instead, greedily gulps down the water himself.

Popeye and Olive Oyl are dismayed as they watch, and then spring into action. “Stop that, you brute!” Olive Oyl cries. “How can you treat a horse like that? My goodness!” Popeye intervenes and puts his body in between the lashes of Bluto’s whip and the horse’s body. In response, the horse turns and plants a big kiss on Popeye’s face.

In typical cartoon fashion, the ensuing battle between good and evil has some silly moments, including a scene where Olive Oyl slips on a pile of banana peels. However, the take-home message of this cartoon is far from a laughing matter. The abuse that this horse suffers at the hands of Bluto mirrors the abuses that took place on a regular basis on the streets of many cities in the late 19th and early 20th centuries. While the medium of the cartoon may have made the message easier for audiences to watch, there is no mistaking the violence at the heart of this story.

The response of the audience gathered at the Velaslavasay Panorama to this cartoon was fabulous. They booed and cheered at the appropriate moments. When Popeye stopped to fuel up with spinach, there was a round of applause because everyone knew that our hero would be victorious – that the horse would be saved. I imagine the response was similar when this cartoon first aired in 1935.

The cartoon ends with Bluto being the one hitched to the front of the wagon and the horse sitting in the driver’s seat brandishing the whip. Popeye and Olive Oyl ride on top of the wagon, helping themselves to more bananas and clearly enjoying this turn of events. While the “role reversal” scene may be far-fetched, it was a visual tactic used with regularity by those advocating on behalf of animals during this era. In essence, cartoons like this asked viewers to imagine what it would feel like to be treated the way many animals were treated. This imaginative exercise, it was hoped, would generate empathy for other species.

The unique characteristics of cartoons (whether animated or still) make them an important form of visual activism. Here there is license for imaginative leaps (such as the horse driving the cart) and for playfulness to be merged with a serious topic in a way that makes it appealing to a wide range of viewers. The response of the audience to the Popeye cartoon at the NMAS event made me realize that this kind of activism is as relevant today as it was for viewers in 1935.