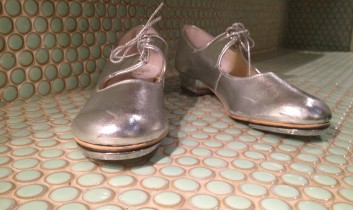 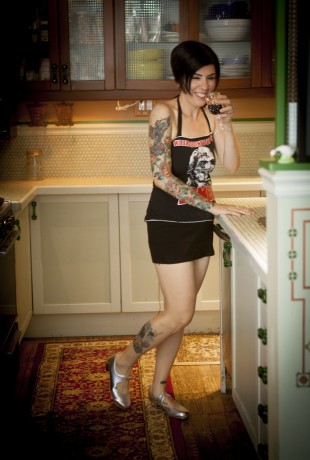 This is me after tap class. Notice the cute shoes? Photo by Jessica Mahady.

Who would have thought that tap class would teach me about how to be a better activist? Certainly not me. And to be honest, I’m not sure that my partner Mariann had that in mind when, earlier this year, she urged me to dust off my tap shoes and revisit a hobby that had been such an important part of my life back when I was a teenager, 20 years ago. Mariann simply thought that I needed a new activity, something that would effectively get me out of head, force me into my body and into the moment, and — if for just 90 minutes a week — give me something else to think about besides animals. Rather than dusting off my old taps, I bought new ones. Vegan ones. Glittery, silver, fabulous ones that everyone asks me about. “They’re vegan,” I proudly proclaim at least once every time I’m at my tap school. Let’s just call that taptivism.

At the American Tap Dance Foundation, I re-entered tap class as an “Absolute Beginner.” I realized pretty quickly that I had sold myself short, and — truthfully — I felt like a bit of an asshole when everyone around me was trying to master the basic shuffle and I was effortlessly doing pull backs across the floor. Apparently, your brain (and your foot memory) has a compartment specifically devoted to things like flap-ball-change. (Perhaps that’s why I can never find my glasses — even when they’re on my face. My subconscious mind is preoccupied remembering how to dance, leaving no space left for finding things.) I was quickly humbled, however, when I realized that — for the life of me — I could not remember a goddamn routine. Sure, I’ve got the moves when they are isolated. But to string them all together? Apparently that compartment of my brain became defunct on this side of 30.

Happily, I soon graduated from Absolute Beginner to straight up Beginner. Huzzah! I was surprised to learn that many of the folks in my class were moved to start tapping for the same reason as me: They took it as a kid, quickly got weighed down by the stress of paying bills and finishing work projects, and somewhere along the way, they lost their fun. Someone in their life noticed that they were constantly waxing poetic about their old days of performing and practicing, and said person urged them to try it again, because why not? (A childhood friend of mine recently started taking an adult gymnastics class for the same reason, and she gets the exact same thrill from it as I get from tap.)

“Beginner” tap was not only much more my speed, but it was actually extremely challenging. I should note that my tap school does not (currently) offer “advanced” classes — they have Absolute Beginner, Beginner, Fast Beginner, and Advanced Beginner. So it’s all relative, I suppose. Regardless, I was now one of the slow kids in the class — and I was petrified. I actually have no idea why I’m speaking in past tense here: I am petrified, every single time I walk into my class. Sometimes, it seems that the only thing I have going for me are my cute shoes. Even my goddamn bunion is out to get me; it wonders why I couldn’t have chosen a hobby like flying a kite, or speed-reading. 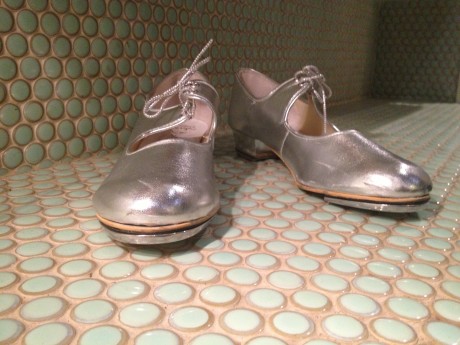 And yet, every single week, I return — petrified, yes, but feeling absolutely electric. Sometimes I am so stupidly happy to be there that I could literally start weeping (which probably wouldn’t go over with my tough-as-nails bad-ass teacher, who is so wildly talented and renowned that I am truly privileged to learn from her). There is simply nothing greater than being forced to be in the moment. If you’re not, you will miss a vital part of the routine, and it will be nearly impossible to pick it up later.

Even when I suck, I love it. It’s frivolous. It’s fun. Plus, there’s a degree of anonymity in it that I find myself craving. For 90 minutes, you are in a room with a bunch of strangers — they don’t know you, and they don’t want to. You don’t know them, and you don’t care to. But still, you’re in it together, as one big noise-making machine. For me, as someone whose life revolves around animal rights and activism, it’s shockingly refreshing to go into a room and not have to talk about gestation crates, or lapsed vegan celebrities, or a letter to the editor opportunity. As Mariann so wisely sensed when she said “take a tap class,” the truth is, I do need a break from that sometimes. Even when I go running, my mind reels around my work. I love that time — I find it surprisingly productive — but I ain’t in the moment, that’s for sure.

Actually, the anonymity I look forward to in tap was recently punctured when I accidentally made a good friend. She asked me to email her the iPhone video of our teacher doing our routine at the end of class (sidenote: this kind of technology would have helped me tremendously back in the day when I used to work so hard to perfect my routines, tapping my little teenage heart out in Metuchen, NJ). I sent the video to her. She noticed my email signature — Executive Director, Our Hen House. We got into a conversation about animals. Turns out she and her partner love animals, and have been advocating for them for years. Her partner is a songwriter and has included pro-animal messaging in many of her pieces. Before long, we met for dinner at NYC’s vegan mainstay, Blossom. One thing led to another and my friend began to embrace veganism. We even took a trip to an animal sanctuary together. And every Wednesday, we still see each other “across a crowded room,” flapping, shuffling, and attempting a left cramp roll. In the last place I could have expected it, I made a friend. A really cool, interesting, smart, funny, and hopefully lifelong friend.

I don’t totally understand how this little hobby that I rekindled a few months back has so quickly entrenched itself into my heart, but yet, there it is. And going back to how I began this, I hope you’ll indulge me for another moment and allow me to spell out for you some of the lessons I have learned from tap that I think can directly pertain to animal activism.

If you feel like sharing, I’d love to know some of the things — not animal related — that you’re passionate about? Are you able to relate it to your activism?