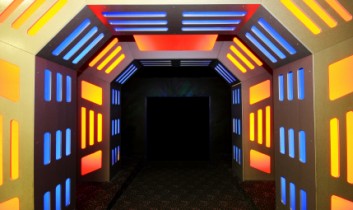 Science fiction as a means to spread the vegan message? Perhaps that’s not as alien a concept as you might think. Ian McDonald explains. 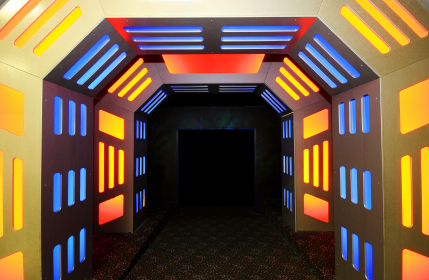 I grew up with Doctor Who. I set up a Star Trek club in the largest university in Europe. Needless to say, I am a science fiction fan.

Thus, as a new vegan, it was gratifying to see Commander Riker of the Starship Enterprise wax lyrical about how well his humanistic utopia treated other animals. But I didn’t expect the writers to think through what that really meant, and wasn’t surprised when he made omelets. Even in imagining other worlds, scriptwriters don’t often escape their own blind spots, especially when it comes to animals.

But science fiction should do better. The best science fiction is about asking questions and really following them through. Animal advocates are united by asking the biggest questions about our relationships with other species. These are questions that deserve the best that science fiction has to offer. If vegans must live in a culture that doesn’t share their values, they should at least have someone imagine such a world for them.

In fact, science fiction has toyed with this very question right from the beginning. While not everyone agrees as to when science fiction began, some say it was with Jonathan Swift’s Gulliver’s Travels, which features ultra-rational intelligent talking horses – a vegetarian civilization that Gulliver strongly prefers to his own.

Given all of this, when I asked listeners of The Vegan Option – my radio documentary series – what topic they wanted the show to explore, I wasn’t surprised that they put science fiction first. One of the joys of making (and, I hope, listening to) a podcast is that you get to hear from the people who really know. In this case, that meant academics who work at the intersection of science fiction studies, media criticism, and animal studies (critical or otherwise). These are the folks who have dug up the best that science fiction has to offer about the questions that plague us all. And who then patiently explain concepts like alterity and novum, both of which are central to science fiction, and both of which are also remarkably useful in coming up with new ways to think about our relationships with animals.

The first of these concepts, alterity, refers to otherness, the contrast with ourselves. Professor Sherryl Vint, who wrote Animals and Alterity: Science Fiction and the Question of the Animal, uses science fiction to examine the boundary between humans and other animals and to explain how other animals are vital to how we define ourselves.

Another candidate for the first science fiction novel – Frankenstein – is an extraordinary exercise in alterity and remains one of the most explicit examinations of the question of the difference, and lack of difference, between animals and humans.

Mary Shelley dreamt up the now-iconic scientist and his creature in 1816. At the time, she was living in a big house in Switzerland with her husband, Percy Bysshe Shelley; her half sister Claire; and Claire’s poetic lover Lord Byron. The household followed a “back to the state of nature” Romantic ethos inspired by Jean-Jacques Rousseau, which included vegetarianism. This ethos clearly infiltrates the story she concocted about a creature made out of a combination of human and non-human body parts. The creature, a tragic misfit in his contemporary world, nevertheless represents humanity in what Rousseau would perhaps have seen as its primal state – gentle and vegetarian, begging to simply be allowed to live on with a mate, promising to leave for the Amazon to survive on fruit and nuts.

The fact that the tale of Frankenstein lives on today and continues to inspire – such as in Sirius: A Fantasy of Love and Discord, a book about a talking pet dog – shows the power of stories that play with our deepest thoughts about alterity, what this otherness can demonstrate about what it means to be human, and how that is different (or maybe not so different) from what it means to be animal.

Novum, the other word that seems to come up so often when science fiction scholars discuss our relationship with animals, refers to the new element that separates the fictional world from our own world and, in doing so, sheds a light on ourselves that allows us to see what, perhaps, was previously hidden. In H. G. Wells’ The War of the Worlds, the novum is the Martians – landing on Earth in war machines and conquering the home counties of England. As a socialist and internationalist, Wells was undoubtedly referring to, even satirizing, the way that the British Empire treated subject peoples. But there are hints that his story of terror and domination also reflected an awareness of how we treat food animals. “We should remember,” said his narrator, “how repulsive our carnivorous habits would seem to an intelligent rabbit.”

Wells was no vegetarian, and hints are all we get. Indeed, recent works of science fiction that are explicitly informed by animal advocacy are rare. But they do exist. Don LePan wrote Animals: A Novel (read the Our Hen House review by Sally Tamarkin) during his own journey to veganism. Some Doctor Who fans credit the Doctor’s temporary turn to vegetarianism in a 1985 episode about carnivorous aliens to vegetarian scriptwriter Robert Holmes. And you can’t get much more obviously pro-animal than David Agranoff’s The Vegan Revolution … with Zombies.

Other than these few, vegan science fiction fans must find less obvious references to our relationships with animals. For example, writers who delve into environmentalist themes sometimes predict a future of mass extinctions that return the majority of the population to involuntary vegetarianism.

Harry Harrison’s Make Room! Make Room! – the basis for the dystopian fantasy film Soylent Green (hear the OHH review on Episode 172 of the podcast) – imagines a crowded, resource-poor future. Margaret Atwood’s Oryx and Crake and The Year of the Flood include a mostly vegetarian religious community struggling through a corporate dystopia. Philip K. Dick was even more explicit in his dystopian classic Do Androids Dream of Electric Sheep? – the basis for the film Blade Runner – by creating a test for humanity that included displaying empathy for (now rare) animals.

Dick also wrote Beyond Lies the Wub, in which an apparent farmed animal argues with human explorers for the right to remain alive (hear Colleen Patrick-Goudreau’s reading on her podcast, Vegetarian Food for Thought). And Douglas Adams satirized the English attitude to meat by having a cow beg for death at The Restaurant at the End of the Universe.

In addition to bringing the animal question into dystopian versions of Earth, occasionally science fiction writers imagine alien civilizations that offer an alternative to exploiting animals.

One example is Karen Traviss’s Wess’har Wars series. Traviss isn’t a vegetarian, but can imagine other ways of seeing the universe. Her series narrates the first contact between a stumbling humanity and the members of an advanced, multispecies, vegan civilization, who, shocked by what they see, decide to liberate Earth … from the humans.

While direct references to animal exploitation and veganism are rare in print, they are probably even rarer in science fiction film. However, while such films do not offer direct examples, they occasionally provide inspiration.

You have probably heard OHH founders Mariann and Jasmin talking about the Planet of the Apes franchise, which has been the subject of much scholarship and activism (see Loredana Loy’s analysis for OHH). The Matrix starkly contrasts the reality of factory-farmed humans with an illusion of normalcy. PhD candidate Tara Lomax is currently writing a paper on how the animal themes in 12 Monkeys underlie the threads of freedom running through the movie.

Even though science fiction does not often wrestle as directly with the animal question as one would hope, I believe that it has, and will continue to have, an important role in changing people’s attitudes toward animals. Fundamentally, the genre remains astute at asking questions, and sometimes those questions prompt people to examine their relationship with animals in ways that they might not otherwise have done. One of my listeners was prompted in his journey to veganism by A Case of Conscience, a science fiction novel that has absolutely nothing to do with animals, but asks if aliens have souls.

Science fiction is remarkable at asking questions. But it’s up to us to find the answers.

Hear Ian discuss “Science Fiction and Animals” (30 minutes) with Sherryl Vint and other experts on The Vegan Option. 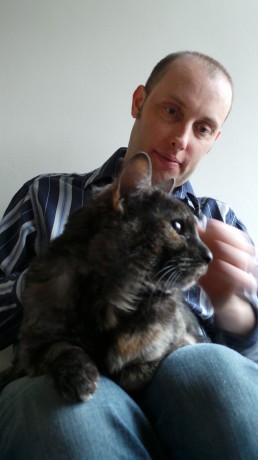 Long-time vegan Ian McDonald, Ph.D. is a BBC-trained digital media freelancer whose work has been broadcast on national radio in the UK. He has a doctorate in bioinformatics, and a license to busk on the London underground. The Vegan Option is his series of radio documentaries, underpinned by a belief that taking other animals fully into account uncovers new stories and makes the world more interesting. He lives in East London with Mazzy, a rescued cat.