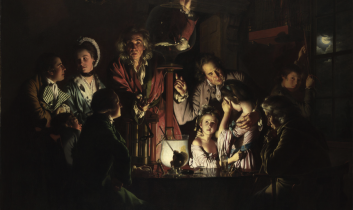 Recently the 2013 Open the Cages (OTC) tour made a stop in my hometown. This year marks the second iteration of the OTC tour, a “travelling animal liberation fest,” which has been stopping in various cities across North America this summer. The tour combines screenings of Karol Orzechowski’s documentary film Maximum Tolerated Dose with music, protests, and workshops, all on the theme of antivivisection. Each stop on the tour brings renewed focus to campaigns taking a stand against experimentation on live animal bodies in the name of science. An additional feature of the August tour dates was a talk on animal agency and resistance in laboratories by Dr. Lauren Corman, assistant professor of Critical Animal Studies at Brock University. While Corman is deeply concerned with the often-horrific treatment that non-human animals endure in labs, her academic work argues the need to move beyond discourses of “voicelessness” and “victimhood” in animal rights/liberation dialogues. She instead stresses the importance of recognizing the ways in which animals resist, assert agency, speak up, and fight back.

Both Maximum Tolerated Dose and Corman’s talk emphasized the politics of sight at play in contemporary antivivisection activism. The film showed scenes that most viewers would typically not have an opportunity to see, while Corman’s talk reminded us that animal agency and resistance do occur in laboratories, even though we can’t necessarily always witness or document it – the very presence of lab manuals discussing proper forms of restraint and how to correctly hold an animal so that he or she doesn’t escape underscores this point. If animals didn’t resist, there would be no need for these guidelines. Both Orzechowski and Corman focus on the importance of being open to seeing or thinking in a different light – in the context of antivivisection activism, it is critical to consider who is permitted (or willing) to see what.

The politics of sight have long informed the representation of animal experimentation. One of the earliest examples of this kind of visual culture is Joseph Wright of Derby’s 1768 painting called An Experiment on a Bird in the Air Pump. This is a complex painting, one that depicts a scene of animal experimentation taking place in a darkened room of a family home. While this location for animal experimentation may seem unusual to us, this kind of traveling education around the subject of natural philosophy (the precursor to more formalized “science”) happened with increasing frequency in 18th-century Britain, especially in the homes of more well-to-do citizens. At the center of the composition is a white-haired man, an itinerant natural philosopher who would have traveled from town to town, demonstrating principles of the natural world by recreating experiments. These demonstrations were, in part, about education, but were also part entertainment and, therefore, most often had a dramatic flare.

The scene in An Experiment on a Bird in the Air Pump is no exception. Here the natural philosopher has placed a white bird, a cockatoo, in a glass vessel that he has deliberately extracted the air out of. The point of this experiment is to demonstrate what happens to living beings when they are deprived of oxygen. This painting captures a moment of heightened tension – will the air be let back in to the vessel in time for the bird to survive? The bird’s head is turned, and one of her wings is awkwardly jutting out to the side – an example, perhaps, of the kind of resistance that Corman speaks of. 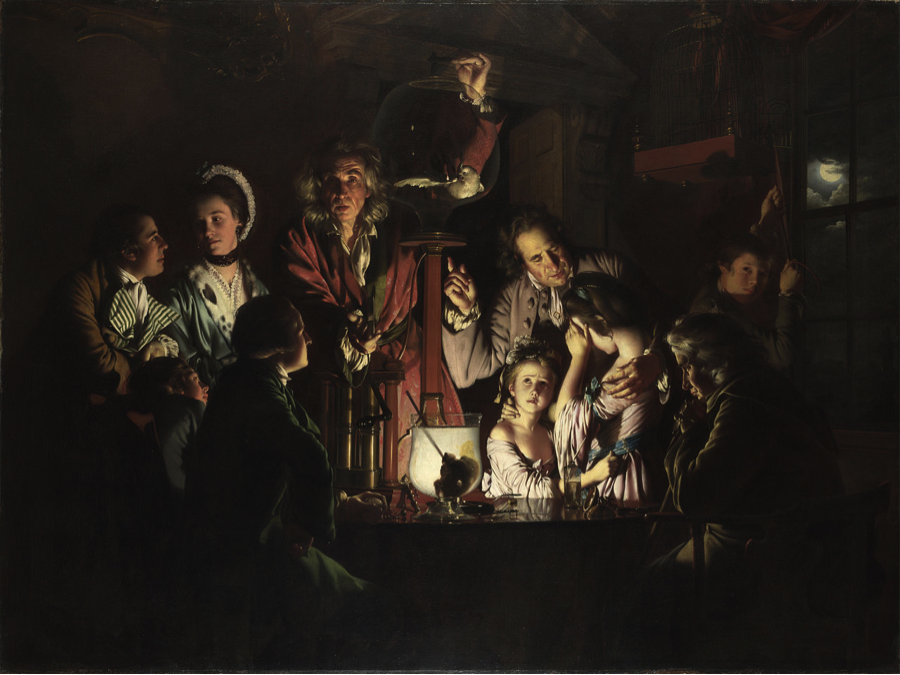 Joseph Wright of Derby, An Experiment on a Bird in the Air Pump (1768)

Joseph Wright of Derby captures the dramatic tension of this scene with the use of color and light. The scene is lit from the center, creating a shadowy atmosphere. There is a space for us, the viewer, around the table should we choose to join the events that are unfolding. This painting was not intended to be an antivivisection picture per se, but it does ask viewers to think about the visibility and “visuality” of experimenting on live animals. The very basic practice of looking, of witnessing, of visually comprehending the principle being demonstrated here is the crux of this painting. Some of the viewers gaze intently at the experiment, perhaps holding their breath in anticipation; others look away, clearly distraught and unable to face the possibility of witnessing cruelty toward another being. The young couple on the left side of the composition only have eyes for one another and are completely oblivious to what is taking place in front of them.

It is these different practices of looking that, for me, link this 18th-century painting to contemporary antivivisection campaigns. When I think about the politics of animal experimentation, I am frequently reminded of this painting and the history it represents – just like in the painting, some choose to bear witness, while others turn their heads to avoid seeing what is happening all around them. While Joseph Wright of Derby was very interested in natural philosophy and was likely not intending to condemn the practice of vivisection in this painting, the different kinds of visual engagement referred to in An Experiment on a Bird in the Air Pump indicates that this type of demonstration was not universally accepted by all. As historian Jenny Uglow notes, there was a kind of “dangerous” air about these experiments. There is open-endedness and a sense of ambiguity in the painting that is, of course, plainly absent in contemporary antivivisection activist efforts like those that were part of the OTC tour. Put simply, when we look at this painting we don’t know what is going to happen next, but it is precisely the ambiguous nature of this narrative that allows for alternate readings of this scene. We can consider other outcomes, including those hoped for and imagined by the individuals who do not hold the dominant position within this painting – the young girls, or the cockatoo, for example.

As we sat and waited for the screening of Maximum Tolerated Dose to begin, some people in the audience expressed anxiety about watching the difficult scenes of animal experimentation that they knew would be part of the film. Would they, like the young girl in the painting, cover their eyes and look away? Joseph Wright of Derby’s painting is a representation of the popular techniques used to educate people about the physical properties of the world around them. With the visual techniques that 21st-century antivivisection activists use to inform people about what goes on out of sight, behind closed doors, a different sort of education is taking place. In the 245 years since this painting was created, the practice of experimenting on live animal bodies has continued, but it has also undergone important transformations. It is, thankfully, no longer socially acceptable to have these kinds of experiments conducted in one’s home, but we have exchanged this practice for another equally disturbing one, namely moving those experiments behind locked doors and windowless walls where only a select few are permitted to witness how they unfold. This is why activist efforts like the OTC tour are so significant.