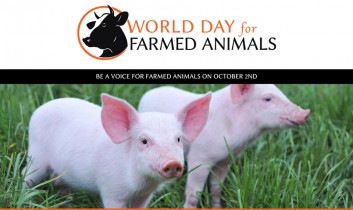 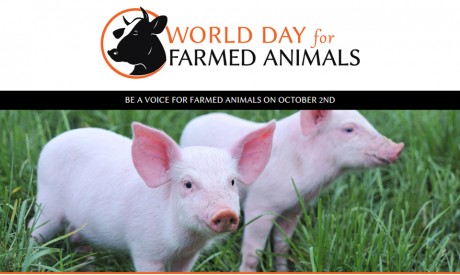 October 2. Does it mean anything to you? Even for people who care about animals a whole lot, sometimes World Day for Farmed Animals takes them by surprise. Maybe in the past, you yourself found out about it right before the day. Or, even worse, perhaps you found out about it on the day itself and figured it was too late to do anything.

But this year can be different. Are you willing to help make that happen?

This year, animal rights organization FARM, with the cooperation of numerous other animal protection organizations, is coordinating events absolutely all over the place. Some will be on October 2 itself, but there are plenty of events being held this weekend as well. There are all sorts of happenings — from leaflettings, to tablings, to volunteer days at sanctuaries. And while we’re all for those things, in spades, we’re also thrilled to see a whole bunch of out-and-out protests. Because — let’s face it — what’s happening to animals deserves to be yelled about!

We’re also happy to see that many of these particular protests are being mounted right in the places where all the horror takes place — at the slaughterhouses. This isn’t to say we don’t completely love to see activists approaching folks at the consumption end of the death machine, and persuading them to stop supporting this industry. But sometimes you have to go directly to the source. By bringing their own voices to the very places where the animals, by the millions, are hung upside-down, where they have their throats slit, and where they bleed to death — these protesters are making it harder and harder for consumers to maintain the disconnect between their compassion and their plates.

Excitingly, some of these protests are even getting advance press, and some of that press demonstrates how intimidated the industry is when it comes to having this light shone on the ugly world of endless killing that feeds its bottom line.

For example, the Milwaukee Journal Sentinel, taking an industry-friendly slant, ominously characterized a press release about a protest on Sunday at a Cargill slaughterhouse as “menacing,” and quoted Emily Metz Meredith of the Animal Agriculture Alliance, one of our “favorite” commentators on animal agriculture, with this, uh, insightful and compelling comment: “If the vegan dream was realized, all these animals could run free. There would be cows all over the road and chickens running loose everywhere.” (Admittedly, I live for these precious moments when the industry opens its mouth, and this is the stuff that comes out. Reminds me of a recent experience I had sitting across from the industry, debate-style — at their insistence — on the evening news.)

There are far too many events planned as part of World Farmed Animal Day to summarize each of them here — but to give you a sampling, here are a few:

It would be exciting to see everyone who cares about animals hit the streets for one of the planned events. But even if you can’t, remember to make your voice heard. Take the opportunity to speak up to your family, your friends, or whomever you can, about why you care so much about creating a new world for animals that’s free of suffering. If we each do that, World Day for Farmed Animals (which, by the way, is also Gandhi’s birthday) will never be overlooked again — not by anyone — until the day when it’s just not needed anymore.