A Vegan Angel … of Death 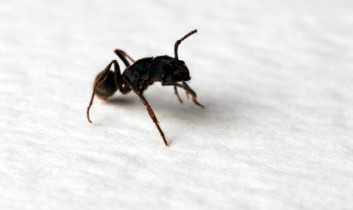 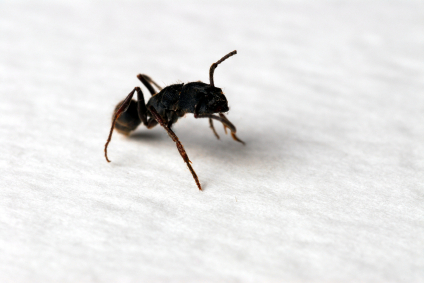 It all started with the sound of a plastic bag crinkling. I was home alone at night, watching TV in the living room. The noise didn’t stop. Figuring it was one of my cats, I got up quietly to try to catch the miscreant in the act of breaking into our food.

The kitchen was empty. The noise continued.

I moved next into the bedroom and turned on the light. And there they were: Hundreds, thousands of swarming winged ants, blanketing the large window frame and the wall next to my bed. Where I sleep. On the floor and baseboard, hordes of their wingless minions, worker ants who can’t reproduce, scuttled back and forth, so dense that I could barely see the wooden slats beneath them.

Heart pounding, I ran out of the room and slammed the door shut. A primal fear of attack and violation turned to anger. I am vegan – I’m an ally of living creatures, so how dare they invade my home? It turns out that the compassion (and rationality) I am so proud of has limits, though I don’t know if the line is drawn at the borders of my turf or by species. Whatever the reason, these ants inside my castle made my hair stand on end, and I wanted every one of them dead and gone.

Vegan or not, I grabbed the iPad and looked up exterminators. I called the two that looked eco-friendly, and both said they would call me back soon. I sat on the edge of the couch clutching the phone, too tense to follow the Downton Abbey story line about whether my favorite character would be hanged. I kept getting up to check for ants escaping from the bedroom.

Neither exterminator called back.

Finally I grabbed my wallet, fled the house in pajama bottoms and a jacket, and bought two cans of Raid from the corner bodega. When I got home I braved the bedroom and started spraying, two-fisted gunslinger style. The window frame, the blinds, the window – even the crown molding that I couldn’t spray without standing on the bed – were crawling with ants. Then I doused the wingless bugs on the radiator, baseboards, and floor. The one that landed on the bedspread. The one on the sheets.

They dropped like flies, so to speak, but that made me feel despicable. Angry, grossed out, and justified, but also fearful and needlessly cruel. The ants caught in the pesticide on the floor convulsed, apparently struggling to escape the toxic puddles. I don’t know what ants can feel, but they looked like they were in agony, and I was the reason.

I had felt so threatened that I wanted to demolish them, but when I saw their helplessness and the suffering I caused them I felt like a monster. Vacuuming up the piles of carcasses the next day made me want to cry, even as I feared that every twinge I felt was an ant on my skin.

Ant expert William Mackay, a professor of biology at the University of Texas at El Paso, broke the disturbing news: “They probably have a nest in the walls of your house.” As he predicted, an exterminator found their nest in the exterior wall above the patio door, just below the bedroom. When this seasoned professional called it “a nightmare,” I felt a little better about freaking out. Also about hiring an exterminator. If I hadn’t, the ants would have returned.

Still beating myself up, I asked Mackay how much my victims had suffered. He said that “theoretically, insects don’t feel pain.” There isn’t much controversy about it among experts, he told me.

Assumptions are tricky things. Descartes assumed that non-human animals could not feel pain. He cut dogs and rabbits open and messed with their innards, breaking bones and cutting organs, while they were still alive. He dismissed others’ observations that the animals were screaming and appeared to be trying to escape by comparing them to machines: Their reactions were just reflexes, he believed, not a sign of suffering. Descartes’ experiments – essentially in vivo autopsies – seem barbaric now that the consensus has swung the other way on vertebrates’ capacity to feel pain. The same could very well happen to experts’ assumptions about insects.

Mackay, with 45 years of ant experience behind him, backed up his stance with an anecdote. Ants will “get in fights, and the abdomen part will be ripped away, and the ants will run around for days. They aren’t affected by it.” But by that logic U.S. gymnast Kerri Strug felt no pain when she injured her ankle, then went on to stick her vault at the 1996 Olympics. She looked the picture of health sprinting up to the horse (though she collapsed as soon as she finished). Who’s to say that injured ants aren’t doing the same thing? Running around because they have to, running through the pain?

Anyway, if Mackay is right and ants don’t feel pain, what was the Raid-induced thrashing about? Mackay believes my little victims were “writhing around because they couldn’t control their bodies,” not because they were suffering. Most insecticides, he explained, work by blocking acetylcholinesterase, which breaks down acetylcholine remaining in the synapse after a neuron fires. If acetylcholine sits around between two nerve cells, it makes the nervous system keep firing, and that can mean convulsions.

But could convulsions mean pain too? I’m still not sure.

I have yet to find a kind way to evict hordes of winged ants. Later Internet research yielded: Rubbing garlic or hot peppers around the perimeters of windows and other points of entry, placing various plants in front of my building, and catching and releasing individuals. It was a little late for garlic or the magical plant border, and while I do catch and release when I find a lone bug in the house (a whiskey glass and a magazine subscription card do the job nicely), more drastic measures are required to defenestrate a mob.

I could take comfort in the fact that I followed the vegan creed of not harming sentient beings to use them for my own purposes. Instead I reflexively defended myself from what felt like an attack. But my motivation mattered little to the ants, who suffered painful (or not?) deaths regardless of my motive.

Massacring ants is hardly the first compromise I’ve made as a vegan. Back before digital cameras, I took photos, even though film contains animal-derived products. Car tires still do, yet I have a car. I directly pay for the torture of many more animals by buying cat food, which most decidedly does not come from animals who lived happy lives ending in natural deaths. The ants were not this vegan’s first victims, nor will they be my last.

An imperfect person in an imperfect world, I do my best to minimize my body count and to inspire others to do the same. Sending the message that being vegan means living with insect infestations is not inspiring to others or tolerable to me. I am not an impervious ascetic and not an angel. I am just a vegan, one who now jumps at the sound of plastic crinkling.