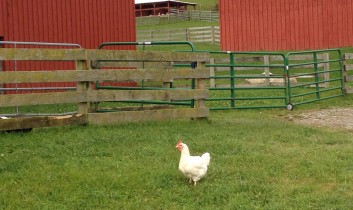 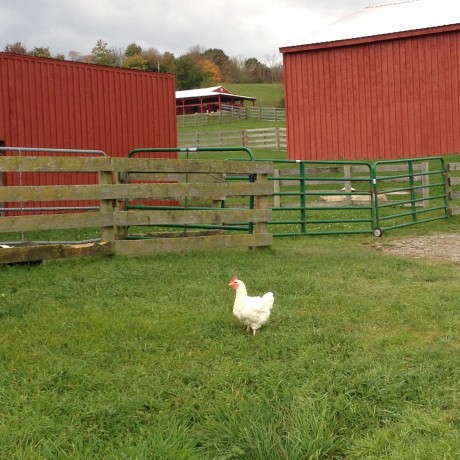 A rescued chicken at Farm Sanctuary

We are writing to you because we are perplexed. You seem like such a nice guy. We want to like you. In fact, we admit it, we do like you. And we especially like what you do with your column over there at the New York Times. You frequently focus on issues that, if it weren’t for you, wouldn’t get much, if any, attention. Often, these are issues that involve women and children — whether it’s sex trafficking or extreme poverty or sexual violence as a weapon of war.

These are tough issues — no question about it. It’s hard for any of us to know what to do about these seemingly intractable problems. Since we don’t think we’re actually doing anything to support these harms, how can we stop them? At first glance, there’s no direct link between us and them. It’s easier not to even think about them. But then you come along, refusing to allow us to become complacent. You’re doing something about these atrocities, and bringing us — your readers — along with you, empowering and emboldening us to take action. The fact is is that by shining a light on what’s happening out there in the world, you can actually succeed in getting so many people upset that the policy changes that need to take place are more likely to happen. And you also refuse to let the rest of us get away with thinking that that’s not my problem. It may be hard for one person to feel that they can have an impact, but each of us has to learn about what’s going on and push for those policy changes. We have a responsibility.

We know that if it were up to you, change would come at a faster clip. But these kinds of problems can’t be solved by one person, even if that person writes for the New York Times. So, Mr. Kristof, you do what you can. And, ultimately, that’s a lot.

One of the issues you’ve written about a bunch of times is animal agriculture. We are beyond thrilled about this. You go there! Hardly anyone in the mainstream press is willing to do that, especially when it comes to caring about the horror of what the animals are going through.

And, as always, what you write comes from the heart. Most recently, you wrote a piece about poultry that not only highlighted how smart the birds are, but recounted the most heartbreaking tale imaginable about the geese you used to help slaughter when you were a farm kid. The way you wrote that story brought tears to our eyes. You’ve got the gift, no doubt about it.

And, no doubt, you have hope that policy changes will result from these writings as well. People will get angry. As a result, lawmakers will step up to the plate, companies will worry about their bottom line, and changes will be made.

Maybe you’re right. Maybe changes will be made.

But, here’s the thing: Unlike trafficking, or lack of educational opportunities in the developing world, or rape culture in Darfur, animal agriculture isn’t out there beyond our reach. It’s right there in your refrigerator, on your plate, ultimately in your mouth. Unlike those other issues, this is one that you are directly responsible for funding. And it’s pretty hard to see why legislators would do anything, or companies would clean up their act, when even their critics don’t see any reason to stop doing business with them. After all, they’re not in this to be beloved. They’re in it to make money. And if you, who understands so well what is going on out there, aren’t willing to pull the plug on the money, who is?

This fact clearly doesn’t escape you. You have mentioned in column after column that maybe the fact that you feel this way about animals, but still eat meat, makes you a hypocrite. Well, once again, you’re right; it does make you a hypocrite. And clearly you know that, or you wouldn’t keep saying it. Some people don’t know what’s going on behind closed doors for animals, but you do. So how is it that you suddenly think it’s OK to be a hypocrite? Sorry, but just as in any other area, you can’t let yourself off the hook just by admitting you know that what you are doing is wrong. Should customers of child porn get away with saying that they know it’s wrong, but they really wanted to? Of course not.

You promised recently that if enough people were interested, you would write on your blog explaining why you still eat meat. We’re so very interested. So please, yes, write that article. And if you’re going to give us some hoo-ha about “humanely raised,” do it right, OK? Don’t go there unless you’re willing to explain how it’s considered “humane” to never let the animals outside; to kill chickens without stunning them first; to take baby cows away from their mothers; to kill male chicks right after they hatch; to never let a hen hatch one of her eggs; to breed chickens so that they have enormous breasts and are ready for slaughter in 8 weeks; to cut off the beaks of laying hens; to kill hens once they stop laying eggs; to castrate, or cut teeth off, or remove horns, without anesthesia. Assuming that you find that those things are “humane,” then tell us if there is anybody out there who is raising animals without doing any of these things. (You’ll find it’s not possible.) Or, for that matter, explain why is it considered “humane” to kill animals who want to live — when you don’t have to breed or kill them at all? And, Mr. Kristof, do your homework. Don’t give us some nonsense, as you have done in the past, about farmers who give their cows names, without also explaining what those farmers do with their cows’ babies just so they can take the milk instead.

Oh, and another thing: You certainly do not come across as an elitist. So don’t just tell us that by buying “humane” products, you support the farmers who grow them, unless you’re willing to also explain how everyone — not just rich Americans — is going to be able to afford to buy animal-derived products produced according to whatever rules you think are good enough. And tell us how there is going to be enough land and water on the planet to do this worldwide, for everyone.

And assuming you can come up with a way to do all of this that you still think is “humane,” tell us how you’re going to get laws passed requiring these standards — since not everyone is going to embrace this voluntarily — and explain how all of these rules for so-called “humane animal care” will be enforced.

Or, on the other hand, just stop eating them. Join the movement to end the suffering of animals, not just to tweak it, or to disguise it. It’s so much easier. It’s so much more effective. And there’s no hypocrisy needed.