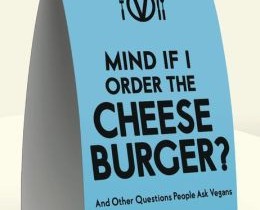 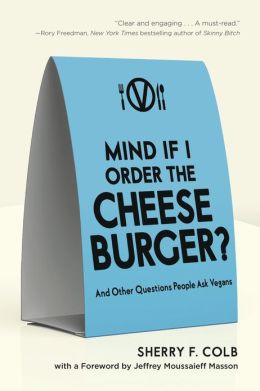 Starting with her title, Mind If I Order the Cheeseburger? And Other Questions People Ask Vegans (Lantern Books, 2013), author Sherry F. Colb touches a nerve. I hate when people ask if it’s okay for them to eat meat in front of me. Though meant to be polite, the question forces me to choose between two bad options: objecting to the cheeseburger, which makes me (and, by extension, other vegans) look rigid and intolerant, or giving my blessing to the purchase and consumption of the flesh and secretions of tortured, murdered animals (and having to watch and smell it).

Colb doesn’t hand out pat answers to the 13 questions she takes on. Instead she explores why “seemingly innocent, polite [questions are] so fraught for many vegans,” and she supplies facts about the plight of non-human animals that can make answers informative and persuasive. To come up with your own answers, Colb advises choosing a style that fits your personality and comfort level.

In her book, Colb dismantles the assumptions and veiled assertions behind questions like “why not just be vegetarian?” and “what about ‘humanely raised’ animal products?” Always intellectually rigorous, Colb also brings patience and empathy to her analysis, allowing a vegan reader to see that seemingly hostile or willfully ignorant questions may not be ill-intentioned. She believes that “many of the non-vegan’s questions come from a place of open-minded curiosity.” Her book can, in the hands of a non-vegan, satisfy that curiosity.

On the other hand, Colb calls out questioners who try “to humorously undermine [our choice to be vegan] in ways that we would recognize as disrespectful were [they] directed at practitioners of a religious faith instead of at vegans.” She affirms that resenting these questions doesn’t mean one is impatient or unreasonably defensive.

That doesn’t give me license to go off on people who, for example, challenge my support for abortion rights as conflicting with my ethical veganism. Treating such comments as opportunities to educate about the exploitation of animals is better for the animals, my relationship with the questioner, and my blood pressure. Colb admits that at first her own “reaction to these sorts of questions was to feel defensive,” but she has since “come to see the challenging inquiries as more of a gift than a burden.”

Another reason not to go on the attack when a meat eater offers something like the nonsensical “but if everyone were vegan, cows would die out” is Colb’s observation that nearly all vegans live in glass houses. “If any of us was inclined to become self-righteous and judgmental, then we would have to direct that judgment against our own former selves,” because most of us were not always vegan.

So when someone challenges your veganism with “don’t animals eat other animals?” resist the temptation to offer the person a football helmet to prevent further brain injury. Instead treat the question as an opportunity to spread your message. Colb’s response to that one is, in brief, that “neither lions nor the species we routinely consume … choose to breed other animals for their own consumption, thereby inflicting massive environmental destruction and starvation in the process.” This is one of many examples of her careful thinking. Rather than just opening the door to a debate between nonscientists over whether we are, like lions, obligate carnivores, with a focus on the shape of our teeth and the length of our intestines, she turns the question into a showcase for the detrimental effects of human meat consumption on other humans.

I’m still irked by stupid questions about my boycott of animal exploitation, but after reading this book I now have specific and thoughtful reasons for being irked. I also have the tools to understand that the other person may be speaking from curiosity, not animosity or willful ignorance, and that an informed, respectful answer could get that person thinking.

Though she doesn’t provide a pat answer to the titular cheeseburger question in the book, she recently revealed two on an episode of the Our Hen House podcast. Colb has found that if she answers her dining companion with, “Do you really want to know?” the person often decides on his or her own not to order an animal product. When she is feeling more expansive, Colb will respond, “If you’re asking whether I’ll still eat with you, then the answer is yes. But if you’re asking whether I’m indifferent, no, I’m not indifferent.” I plan to use both.

I recommend this book to everyone. Vegans, if there is any way you can get a non-vegan to take a look at it, do. I can see it having the same impact on someone that Peter Singer’s Animal Liberation had on me – creating a new vegan.