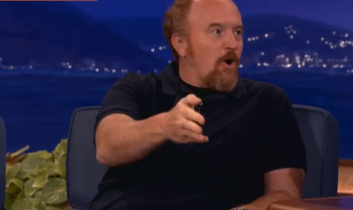 I’ve been thinking about therapy lately. I imagine it’s because I always react very strongly to the change of season, and with the whole Grandma-thing weighing me down — and the grim reality of what happens to animals behind closed doors acting as a permanent backdrop — I’ve been desperately trying to remember those life lessons I learned back when I paid oodles of money to get my head screwed on straight (so much for that). 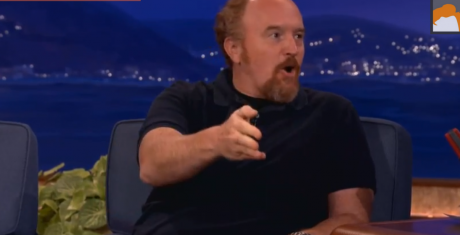 With that on my mind, the last thing I expected when I saw Louis CK talk about why his kids would not be using a cell phone anytime soon was to feel powerfully moved, and to distinctly recall that sense of “AH, YES!” that I used to feel when everything rattling around in the back of my brain started to gel.

“The thing is,” said Louis, “you need to build an ability to just be yourself and not be doing something. That’s what the phones are taking away.”

There’s something to be said about a comedian who can simultaneously make you laugh to the point of tears, and make you question your worldview. As you probably know, since the video went beyond viral, recently, on The Conan Show, Louis recalled an incident where he used his phone to distract himself from his darker emotions: “OK, I’m getting sad,” he said. “I gotta get the phone and write ‘hi’ to like 50 people. […] I was reaching for the phone and I said, ‘You know what? Don’t. Just, be sad. Just let it hit you like a truck.’”

Maybe it’s true that cell phones and the other gadgets that rule our lives have become the modern day replacements for real emotions, but what I’m really wondering is whether watching YouTube videos of Louis CK has become the replacement for therapy? The irrationally powerful reaction I (and a gazillion others) had to watching him explain why he won’t let his kids have cell phones, and why life is about feeling abundant sadness sometimes, made me wonder if I should consider Louis my guru. (Not that I believe in gurus.)

In New York City, where I live, people talk about their therapists just about as readily as they talk about their cats. Most of us have (or have recently had) a shrink. As for me, I’ve been out of therapy for several years now. When I was a patient, however – of the same psychologist for a decade – I honestly could not have imagined my life without it. Now that I’m long gone from its comforting grasp, I am not sure I can imagine going back. (Not with Louis CK so easily Googleable, anyhow.)

Recently, I have found myself pondering whether the countless thousands of dollars that my insurance (lucky me!) paid for me to get my head screwed on tighter – not to mention the hefty copays I forked over each week after I was through complaining about my somewhat suppressed sexual orientation – was worth it? Basically, what I want to know is, am I at the point that I can try to make therapy a DIY project? If Louis CK can wax poetic about cell phones and have it ring true (get it?) for the over five million viewers who watched his YouTube video (at least some of whom were certainly as moved as I was, and left questioning whether something as seemingly benign as their gadgets were standing in the way of their ability to really experience all the wonders of being alive), then maybe I should try my hand at spelling out some seemingly obvious life lessons. As an activist especially, I think that reconnecting with these lessons can allow me to press “reboot” when I need to. Maybe consciously and regularly standing by these introspections, along with fastidiously following the “comedy” of Louis CK, will be my apple-a-day.

Aside from putting down my cell phone every now and then (it’s literally balanced on my chest as I type this), these are my five reminders of how to navigate life:

And so, here I am. Being a little too honest-for-comfort in my column today, and mentally planning on looking up Louis CK videos just after publishing this.

Louis aside, when I re-focus on the animals, things seem clearer to me. I feel motivated and hopeful, understanding and understood. Even in the depths of despair over anticipating personal loss beyond what I can fathom, I feel less alone.

A song recently wound up in my inbox, by the band Br’er Rabbit. I had the distinct pleasure of meeting the female singer, Miranda Zickler, when I was a judge in NYC’s Vegan Talent Show. Miranda, who is wildly talented, and a passionate animal rights activist, reached out to me to share the band’s song, “Open Up.” I am so touched by this song — both the hopefulness and raw honesty of it. It seems fitting to share with you the lyrics (which I’m doing with Br’er Rabbit’s permission, of course), followed by the music video for it. I hope it gives you hope. If it doesn’t, be sure to catch Louis CK chat about cell phones — and then, consult a therapist.

Hear my cries, my lungs and eyes
Grow weary in the cold
And all I’ve known is dust and bone
And so I’ll be, I’m told

Open up, open wide
Let me see what’s been hiding
In your mouth, in your dreams,
In the dark, let me crawl in and see
What’s in your heart

‘Cause I’ve heard you say
You want the best for everyone
But your actions day to day
Leave much to be said,
Much to be done

Here it goes, here it is:
When it comes down to it,
We all want to live
In our homes, in our beds,
With a love on which we can
Rest our heads and hearts

But I know it’s been hard
And you can’t help
Put your guard up to the things,
In the end, you know might be right
You can’t help but fight

And I’ve heard you say
You want the best for everyone,
But your actions day to day
Leave much to be said,
Much to be done