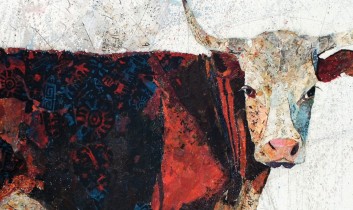 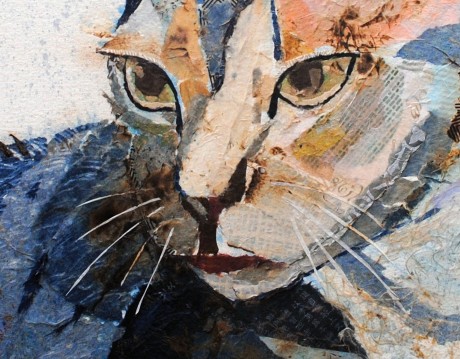 Animal Liberation, Peter Singer’s classic text, has influenced countless activists since it was first published in 1975. It has also inspired Nonhuman Animals: Eat, Test, Love, a new art exhibit currently on display at Princeton University, where Singer is the Ira W. DeCamp Professor of Bioethics. The exhibition features recent work by mixed media artist Hetty Baiz, and is an extension of her response to reading Animal Liberation, a book that she describes as “life changing.”

There are twelve large-scale pieces in this exhibition, each one focusing on a specific animal. The animals Baiz chose to focus on are representative of species that she feels are most negatively affected by human activities today. For instance, she has included a cow, a chicken, a pig, a goose, and a calf to symbolize the animals who are exploited through our systems of industrial agriculture. A rat, a rabbit, a cat, a dog, and a monkey are represented as visual reminders of the animals who are frequently found in laboratories and who are subject to vivisection. Another piece in the exhibition is a representation of a large fish, an evocation of the environmental, health, and ethical issues inherent in contemporary aquaculture (“fish farming”). And, finally, Baiz addresses human encroachment on “wildlife” species through the inclusion of an image of the California Condor, an animal who was declared extinct in the wild in 1987, but whose numbers are starting to increase in recent years thanks to reintroduction. 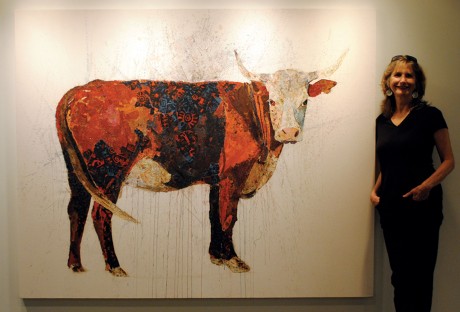 Each artwork in Nonhuman Animals: Eat, Test, Love is comprised of hundreds of pieces of torn paper which are assembled in order to create the representation of each animal. The paper that Baiz uses is hand-painted or hand-made paper, and she often uses papers from around the world such as papyrus or banana paper. She also frequently incorporates other materials as well, for example, photographs collected from her travels in Asia and Africa. The process of assembling the pieces is an important part of Baiz’s creative process, as she does not begin the work with a preconceived idea about the final outcome. Once the basic shape of the animal emerges, Baiz modifies the piece through burning, cutting, scraping, or adding more pigment. These expressive acts are, perhaps, the most significant aspect of these works. These actions ensure that what we see in Nonhuman Animals: Eat, Test, Love are not “pretty” or “untouched” animal bodies but, rather, representations of animals whose bodies are scarred and modified — her actions echo the abuse that happens to animal bodies in situations like factory farming. The end result is a complex, layered representation of each animal that suggests the lived realities of the members of that species. 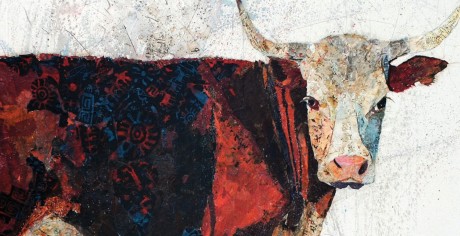 For example, the calf in this exhibition is faceless, a compositional detail symbolic of the fact that veal calves are raised in deplorable conditions; the blackened, burned body of the pig represents the routine abuse these animals face; and the words “speciesism,” “factory farming,” and “sirloin” are stamped on to the cow’s body, a literal reminder of the ways in which these animals are treated and conceived of in our society. These details are subtle but powerful — from a distance they are imperceptible, in much the same way as these animals tend to be rendered culturally invisible in our society. It is only through closer examination — of both the pieces and the conditions in which these animals live — that these details begin to become evident. Several text panels from Peter Singer’s book accompany the exhibit. These are small panels that, again, are only visible when the viewer is up close to the artwork. Baiz wanted to ensure that people were first drawn in by the art itself before engaging with these other details. 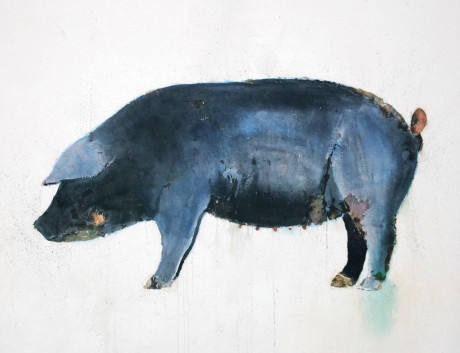 When I spoke with Baiz about the role of imagery in activism, she noted how sometimes a graphic photograph of animal cruelty can be “too much” for some viewers and how some people have a visceral reaction and turn away from “difficult imagery.” While the works in Nonhuman Animals: Eat, Test, Love are not “graphic” images, they do focus on topics that many viewers find disturbing (e.g.: factory farming, vivisection, environmental destruction). Because of this, Baiz feels it is important that her work engage viewers in a “gentle” manner, that people don’t turn away from these pieces before they have a chance to really see what is going on, both in terms of the art and in the broader context of how animals are treated in our society. She does not want her work to be seen as didactic or “instructional” — the pieces in this exhibition are her personal responses to these issues, and she hopes that her works provide space for viewers to engage with their own responses to these issues.

Nonhuman Animals: Eat, Test, Love is on exhibit at the Bernstein Gallery at Princeton, part of the Woodrow Wilson School of Public & International Affairs, from September 16 to October 18, 2013. The curatorial programming for the exhibit includes a panel discussion on October 8 that features Peter Singer and Jeff McMahan, Professor of Philosophy at Rutgers University.