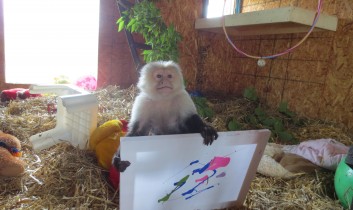 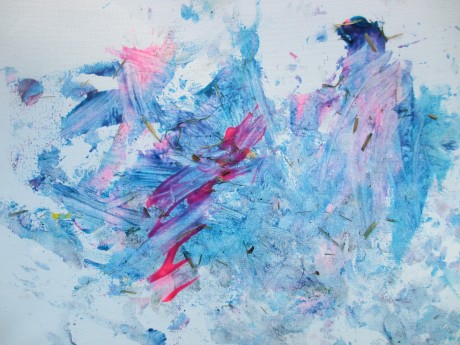 This autumn the work of an artist by the name of Pockets Warhol went on display at the Gladstone Hotel in Toronto, and it caught the attention of national media. The Gladstone has a reputation as “Canada’s favorite Boutique Art Hotel,” and is known for its unique artist designed hotel rooms in addition to the exhibits of contemporary art it hosts on a regular basis. This is an arty place — an art show at the Gladstone, in other words, is not an unexpected event. What made this particular exhibition different, however, was that Pockets Warhol is a capuchin monkey. The exhibit, billed as the “Art Pioneers Exhibit,” featured Warhol’s work alongside the work of two human artists, Brent Roe and Scotch Camera.

Pockets Warhol lives at Story Book Farm Primate Sanctuary in Sunderland, Ontario. His artistic abilities were discovered one day when Charmaine Quinn, a volunteer at the sanctuary, noted that he had some physical characteristics that reminded her of Andy Warhol (e.g.: a shock of white hair framing a very pale face). On a whim Quinn gave Pockets some non-toxic paint to play with and he took to painting right away. Pockets seems to really enjoy painting, and throws his whole body in to his work, painting with his tail, his feet, and his hands. He chooses which colors to use and how the paint is applied to the canvas. Pockets Warhol’s paintings have been purchased by collectors around the world, and the money raised through the sale of his art helps fund the operations of the sanctuary. Pockets is currently ranked as the #8 selling animal artist in the world. 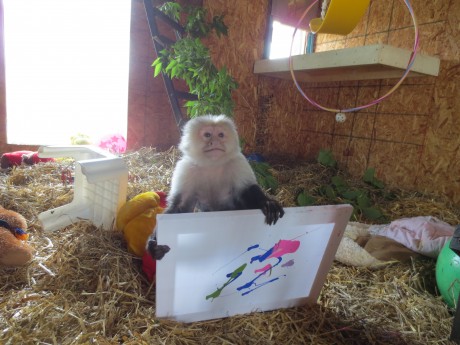 The story of Pockets Warhol generated a lot of discussion in my “Picturing Animals” class this semester. We talked about the potential of animals other than humans to enjoy creative pursuits. We talked about the motivations behind artistic expression and whether or not this was something unique to humans. We talked about why a sanctuary might choose to introduce artistic materials as an “enrichment activity” for the animals who live there. We also talked about other nonhuman animals who have made headlines for their artistic endeavors — animals like Congo the Chimpanzee, the Pennywell painting pigs, and elephants who paint.

When I have had this discussion with other groups of students in previous years, the focus of the conversation often tended to be on the desire for creative expression – specifically, if this was something that nonhuman animals were capable of. Some students were skeptical — animals may enjoy moving the paint around, but do they really know what they are doing? In other words, was there creative intent? 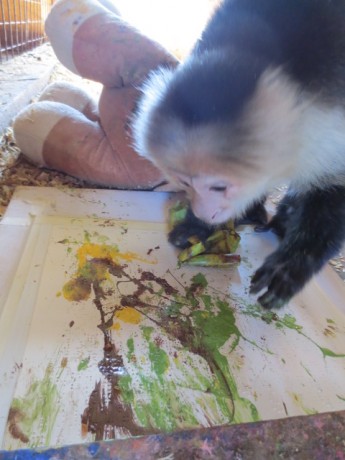 This year there were still some comments along this line of inquiry, but for the most part the students in my class this term were much more concerned about discussing the motivations of those who care for these animals. Was it about enrichment or was it about profit? Did the animals want to paint or were they coerced in to doing it? We spent a lot of time discussing the allegations of “negative reinforcement” and abuse that has surfaced in some of these instances. For example, Elephant Asia Rescue and Survival Foundation (EARS) campaigns against elephant painting because of the ways in which these animals are trained to make art.

Can nonhuman animals be artists? Our class discussion highlighted the complexities of this topic. On the one hand, the idea that creativity is something only humans possess is an argument that is becoming harder and harder to support. As the work of cognitive ethologists like Marc Bekoff and Jonathan Balcombe has made abundantly clear, many nonhuman animals have emotional and cognitive abilities that are strikingly similar to our own. If nonhuman animals can grieve, use tools, and possess a sense of justice, is it a stretch to think they may be also capable of creative intent? 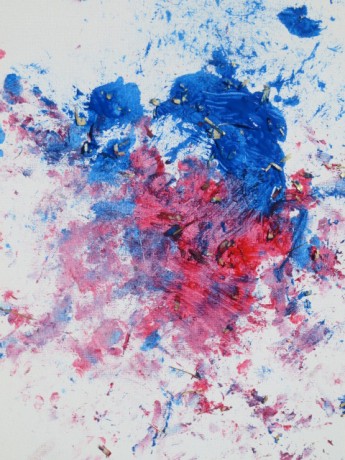 But regardless of where we come down on the ability of animals, or a particular animal, to intentionally produce what we call art, we need to think critically when we are faced with a situation where a nonhuman animal is celebrated as an artist. We need to be prepared to ask questions — not necessarily about whether or not an animal can be creative, but about why a particular animal is making art in a particular circumstance. Who benefits and what is the motivation behind this practice?

In the case of Pockets Warhol, I have no doubt that painting is something that he very much enjoys doing, and that he chooses when and what to paint. Quinn and other caregivers may provide the art supplies, but the motivation to create these paintings seems to be coming from Pockets Warhol himself. Story Book Farm is a respected sanctuary that rescues primates from situations of abuse and neglect, and the comfort, safety, and well-being of the animals who live at the sanctuary are top priorities. Story Book Farm Primate Sanctuary also works hard to educate people about the exploitation of primates in places like zoos and laboratories. This is a charitable organization, and any money generated through the sale of Pockets Warhol’s art goes back in to rescue and advocacy efforts.

However, in other situations where animal artists reside, things aren’t always so clear-cut. Before buying or supporting art made by nonhuman animals, it is important to do some research and to ask questions not only about the process by which the art was made, but also about who really benefits from having an animal artist in residence.