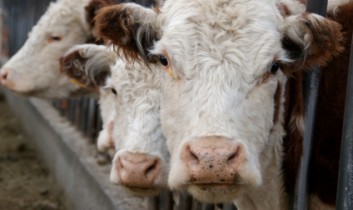 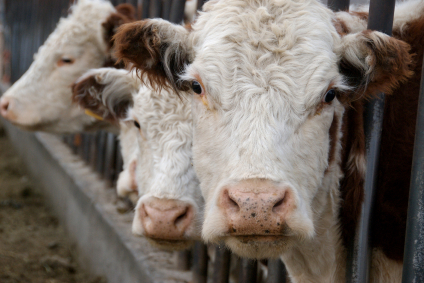 I had been to a stockyard before, but that was many decades ago…

I grew up in a part of Canada that has a lot of farming communities, and I have vivid memories of going with my uncle to a live animal auction at the stockyard nearest his home. I was very young at the time, and the day was presented to me as an exciting outing. I remember dressing very carefully – wearing blue jeans, a cowboy hat, and cowboy boots. I wanted to look the part, so that I could fit in and make my uncle proud. It was an honor to be asked to go with him on such an important journey. I remember bits and pieces from that day, but the overall impression was that this was an exciting place to be, especially for a young child – there were bright lights, big crowds, and a concession with popcorn and cotton candy. I remember being very confused about how the auction system worked (what the heck was that auctioneer saying, anyhow?!), and being absolutely charmed by the calves who were being paraded around the sale ring. I probably made up names for them as they ran by our seats, hoping against hope that I could bring some of them back home with me to my suburban home, and make them my “pets.”

I had forgotten about that long-ago visit to a stockyard until I found out I would be visiting one as part of my internship experience at Farm Sanctuary this past December. When you are a shelter intern, you spend a lot of your time helping out with different aspects of day-to-day operations on the farm, but there is also an important educational component built in to the internship – it is more than simply volunteering to help out. For example, interns attend regular “ed lunches,” where broader topics about activism are discussed over a home-cooked vegan meal. Another educational aspect of the internship program is the trip to a stockyard, an opportunity to see first-hand how animals who are not fortunate enough to live out their lives at a sanctuary are routinely treated.

As activists, we tend to focus our attention mostly on large-scale “factory farms,” an understandable response given that the majority of animals consumed in North America live and die in these contexts. However, my visit to the stockyard reminded me that the systems of animal agriculture are complex, and that smaller farms still have a role in this system, albeit one that has changed dramatically in recent decades. A stockyard like the one I visited as part of my internship exists primarily to work with these smaller-scale farms. While industrial-scale “factory farms” provide the majority of animals consumed in North America, the rise of the local food movement coupled with growing awareness of the inherent problems with industrial-scale animal agriculture have led many consumers to seek out alternative sources for their meat, dairy, and eggs. Backyard chickens, “grass-fed” cattle, and male bull calves from local dairy farms tend to be the kinds of animals found at these sales. This is also where “spent” dairy cows are sent when they are no longer able to produce milk at a rate considered to be profitable.

It was obvious to me that this visit to a stockyard would be a very different experience than the one I had as a child. Now that I am an animal rights activist, I am very aware of some of the things I did not see (or even know to look for) during my first trip, as a kid, to a stockyard. And yet, in some ways, that long ago visit helped me make sense of what I was witnessing as I stepped back into one, this time with my fellow interns.

One of the first things I noticed as we arrived was a large sign indicating which types of animals could be brought on the property, or, perhaps more specifically, which animals would be denied entrance – sick animals, or animals “with conditions that may be found offensive to the general public.” This system of visual inspection (as opposed to blood tests or other ways to gauge the health of an animal) that served as a regulatory mechanism for the stockyard operations was repeated throughout the facility in a number of ways. Throughout our visit, I was acutely aware of the politics and power that accompany practices of looking, seeing, and watching – these seemingly simple acts were, in this context, continually contested.

Our arrival did not go unnoticed. We were outsiders, we looked different, and we acted differently. This particular stockyard was situated in a small rural community, the kind where non-locals are often easily recognized. We didn’t say much as we walked through the facility. We quietly took in the sights, sounds, and smells. The several signs posted around the facility emphasizing that the staff were trained to safely and humanely handle animals seemed to be for the benefit of folks like us – outsiders, people who were not immersed in the local farming economy.

While we were viewing the animals in pens – awaiting their turn in the auction ring – we were, in turn, being looked at, too. Not only were we being watched by the animals who were about to be sold, but also by the people who came to the stockyard that day to buy, sell, or observe. More than once, I locked eyes with someone who seemed to be at home in this environment, someone who, through their gaze, appeared to be questioning or challenging my presence. Perhaps I was meant to look away deferentially because I was the newcomer, but I did not. To not look away felt defiant somehow – emblematic of the fact that I had come there for the very purpose of observing, seeing, witnessing. I realized that my choice to be at the stockyard that day was a reflection of my privilege – I was free to walk in and out of this environment as I saw fit. Neither my life nor my livelihood depended upon me being there, but the same was not necessarily true for others in attendance that day.

While walking around, I saw a young boy barely out of diapers being taught how to corral calves in to a holding pen using a cattle prod, the adults who accompanied him clearly proud of his abilities in this area. I watched young calves being paraded one by one in front of the auctioneer’s podium while a small audience of potential buyers looked on. I let a small black and white calf who had an ear tag identifying him simply as “Z404” suck on my fingers for comfort – he was probably less than a day old, and I didn’t want to think about where his mother might have been. I saw tiny piglets withdraw in fear when I bent down to say hello to them. What makes a piglet that young so afraid of human attention?

But the thing that might have been the most distressing of all was the look in the eyes of the adult cows. Their eyes were bulging with fear and stress as they wildly looked around their surroundings. If anyone came near to pet them – a natural reaction for a group of interns who had just come from Farm Sanctuary – these cows recoiled in terror. What were they seeing? What were they thinking? What did they anticipate we were going to do to them as we extended our hands towards them?

I also saw an environment so very different from the stockyard I had visited with my uncle. The bright lights and slick façade of the auction I attended as a child were noticeably absent in this facility. The area in which my uncle lived was a relatively prosperous region (thanks in no small part to animal agriculture), and this was reflected in the physical environment of the stockyard he took me to. The stockyard I visited as part of my Farm Sanctuary internship looked very different. This was a much smaller environment, and much less showy. The corridors connecting the various pens were dark, and there was little to distract a visitor from the main task at hand, the commercial trade in live animal bodies. I later learned that this stockyard is situated in one of the most economically depressed counties in the United States.

And yet there were similarities, too. There was, of course, the obvious fact that both facilities existed for the buying and selling of animals raised in agricultural environments, but beyond that, I noticed things that felt familiar. I saw families with young children who were clearly enjoying an outing together. I saw teenage girls visibly proud of the animals they had tended to and raised. I saw many people who probably work very hard on farms that have likely been in their family for generations. Were these people all that different from the kind-hearted folks like my uncle, who I looked up to when I was a young girl? While I found the situation that the animals at the stockyard were in heartbreaking, I also realized that to place the blame for this situation entirely on the people attending the auction was to overlook the larger systemic issues that fuel the demand for animal “products” in our world today.

I think I expected that our trip to the stockyard would make me angry, and yet that didn’t happen. It made me deeply sad. I was, of course, sad for the animals who would face very different fates than the animals I had come to know and love at Farm Sanctuary, but I also left feeling troubled by the reminder of just how firmly entrenched animal exploitation is in our society.