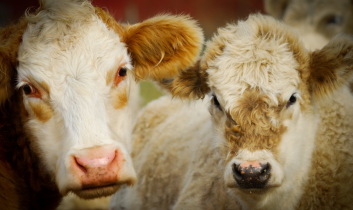 On our recent 216th podcast episode, activist Jessika Ava joined us to discuss her new policy paper for Brighter Green, entitled Beyond the Pail, which charts the rapid expansion of dairy CAFOs in Asia, including in countries of East Asia that have never had a tradition of drinking milk and have widespread lactose intolerance. Many of you remarked how fascinating her interview was (we agree!). Today, we’re lucky enough to have Jessika back — this time joined by Brighter Green’s founder, Mia MacDonald — to expand on this important topic. We hope that you find Jessika and Mia’s feature, “Big Dairy is Gaining a Foothold in Asia; ‘Milk Life’ Waking?” to be as eye-opening as we did.

by Jessika Ava and Mia MacDonald 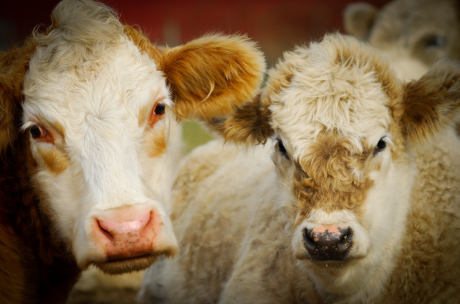 Photo by Jo-Anne McArthur of We Animals. Meg and Mary Lou, mother and daughter, rescued from a starvation case. Farm Sanctuary, NY, USA.

Got milk? Despite the seemingly ubiquitous ad campaign, milk consumption in the U.S. has been flat for decades and is dropping. The dairy industry is seeking new ways to market milk, leading it to abandon the “Got Milk?” tagline for a new one: “Milk Life.” This ad campaign is focused on kids. Will it work to revive U.S. dairy’s fortunes? It’s too early to say, but U.S. and multi-national dairy producers and packagers are certainly not relying on it. Instead, they have been looking much further afield. Globally, that is.

With the industrialized world’s dairy markets nearly saturated, “big dairy” is thinking outside the proverbial (milk) pail and expanding into a relatively untapped “emerging” market of nearly 3 billion potential new dairy product consumers. These include people in rural and urban areas in the global South (developing world) who in the past didn’t have much purchasing power or access to the animal-based foods people in the U.S. and Europe take for granted. And a primary target within these regions is school children.

Asia, with its large population (including in China and India, the two most populous countries in the world, and Indonesia, the fourth), growing middle class and increased exposure to Western lifestyles and products, is potentially the corporate dairy industry’s next big opportunity – even though milk has never been part of traditional diets in East Asia and lactose intolerance is widespread in the region. One estimate concludes that up to 98 percent of Asian children experience hereditary lactose intolerance.

Asian nations, many of which lack animal welfare or strong environmental regulations, offer promising terrain for the introduction of Concentrated Animal Feeding Operations (CAFOs). CAFOs (aka factory farms) are char­acterized by the lifelong, indoor confinement of hundreds or even thousands of animals in a single location. In Asia, CAFOs are being established by private enterprises or through partnerships between multinational corporations and governments.

The scale of some of these facilities is immense. Viet Nam is constructing what will reportedly be the world’s largest dairy factory farm. It’s expected to have a population of 137,000 cows when it’s fully up and running. Asian dairy factory farms generate the same negative animal welfare, environmental, and public health impacts as those in the U.S., but awareness of these effects within Asian countries is still limited. That’s one of the major reasons Brighter Green published Beyond the Pail: The Emergence of Industrialized Dairy Systems in Asia.

Governments across Asia are eager to modernize agricul­tural production, leading them to welcome, and in some cases actively facilitate, corporate-led industrialization of their dairy sectors. Indeed, for governments in the region, rising dairy consumption is seen as good for their societies, improving nutrition and consumer choice. And bringing Big Dairy into their countries isn’t hard. Industrial agriculture – factory farms, feedlots, large-scale cultivation of “feed” crops like corn and soybeans – is a readily available system and large, mainly Western agribusinesses have speed and financing on their side, enabling them to set up CAFOs and related supply chains. Plus, in-country agribusinesses, often working in partnership with Western corporations or investors, are keen to get a piece of the action.

In China, domestic production of milk is expected to triple by 2030 and the number of dairy CAFOs is increasing quickly. China Modern Dairy set up China’s first CAFOs and now has 22 of them, with 180,000 cows. In 2013, a $140 million joint venture to build two, 10,000-cow dairy CAFOs was announced by China Mod­ern Dairy, U.S.-based private equity firm Kohlberg Kravis Roberts & Co. (KKR & Co.), and CDH Investments, a Chinese private equity firm.

Cambodia, where people traditionally consumed virtually no dairy and the little milk that was consumed was imported, milked its first cow when the country’s first dairy operation, a CAFO, opened in 2011. It’s a $250 million joint venture built on the edge of a national park that’s home to endangered leopards and tigers, raising the specter of CAFO pollution inside the park and lethal control of predators.

A dairy CAFO with 2,500 cows creates as much waste as a city of 400,000 people and the majority of CAFO wastes go untreated. Dairy CAFOs are also a significant contributor to city smog, and many Asian metropolises are already experiencing hazardous levels of air pollution. CAFOs also expose communities and employees to occupational hazards, including toxic air in and around CAFO housing systems and manure-holding lagoons. The World Health Organization (WHO) and public health experts confirm that routine use of antibiotics in CAFOs is a major cause of the development of antibiotic resistant bacteria.

Moreover, a majority of factory-farmed cows aren’t indigenous to Asia and are shipped, while pregnant, across the Pacific from New Zealand and Australia. The cows must endure a treacherous and painful journey for several weeks, only to be confronted by a hot, tropical climate to which they aren’t adapted, leaving them vulnerable to heat stress. They are then put into production and suffer the same brutal practices that are used to produce dairy in U.S. CAFOs.

One positive piece of news: developers of India’s largest dairy CAFO were thwarted last September when the state government in Andhra Pradesh banned the import of 9,000 pregnant cows, citing animal welfare and other concerns. This stopped work on the operation, which was to have housed an astonishing 40,000 cows.

The growth of industrial dairy production in Asia is taking place even as researchers, advocates, and some policy-makers in the U.S., Europe, Australia and New Zealand re-evaluate the desirability and sustainability of a CAFO-centered agricultural sector, the health consequences of high dairy consumption and the need for dairy in a healthy diet.

Asian policy-makers, civil society, and private sector investors have a chance to interrupt the cycle of more CAFOs and more dairy and, instead, create sustainable, equitable, and humane food and agriculture systems – before “milk life” becomes the norm. 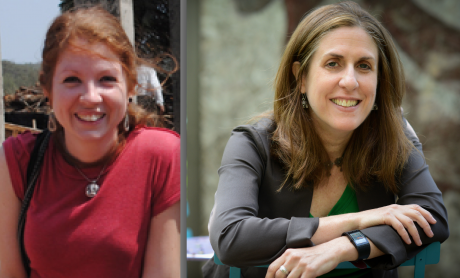 Jessika Ava is the author of the new policy paper, Beyond the Pail: The Emergence of Industrialized Dairy Systems in Asia, published by Brighter Green, from which this piece is adapted. She has been working for animal rights in various capacities for over 10 years, from elephant conservation and primate behavior to food policy and vegan advocacy. In fall 2014 she will begin her PhD in Biostatistics. Mia MacDonald, a policy analyst and writer, is Executive Director of Brighter Green, a Brooklyn-based public policy action tank based that works to raise awareness of and encourage policy action on issues that span the environment, animals, and sustainability.