Four Takeaways from “The Meat We Eat: 2014 Forum on Industrial Animal Farming” 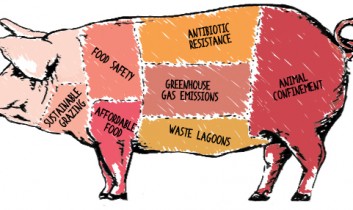 We were delighted to hear that animal advocate Sophie Besl would be attending “The Meat We Eat” forum at Harvard Law School – especially when she offered to write about it for Our Hen House.

Four Takeaways from “The Meat We Eat: 2014 Forum on Industrial Animal Farming”

When I heard about The Meat We Eat forum at Harvard Law School, I decided that, as a newbie to the animal rights movement, I should go learn about the issues. Since the event was convened by the Harvard Food Law Society, with an agenda to explore food law and policy issues in general, I knew that the information would be conveyed through an objective lens. Fortunately, however, due to the co-sponsorship by the Harvard Student Animal Legal Defense Fund, the event included a strong pro-vegan, activist voice and drew an audience interested in hearing that perspective. In fact, Food Law Society members I spoke with were excited about the unexpectedly large turnout, which I’m sure was due to the influx of fellow Boston-area vegans and activists.

Four key themes emerged on which the diverse array of speakers appeared to agree. That these themes are all somewhat connected confirms their validity, plus they are excellent fuel for the animal rights movement in its fight against animal agribusiness.

1. Loopholes in laws regulating industrial animal farming are “big enough to drive a truck through,” and most laws only protect the industry.

For example, to prove that most legislation protecting food animals is “irrelevant,” Meatonomics author and lawyer David Simon gave an example of a federal statute that requires that drivers transporting food animals across state lines must let them all off the truck for food, water, and rest after 28 consecutive hours of travel. However, if drivers can’t avoid violating this law “while being careful,” they don’t have to follow it. This law has yet to penalize anyone with the absurdly low $650 fine, and it doesn’t even apply to chickens or turkeys. Even if the law were enforced, Simon drove home the insanity of the “protection” afforded by the law by asking, “Has anyone ever been denied food, water, and rest for 28 hours?”

Laws affecting those who care about animals are, of course, just as problematic as laws that affect the animals themselves. Erica Meier, executive director of Compassion Over Killing, explained anti-whistleblower, or “ag-gag,” laws, which have arisen because “every undercover investigation leads to slaughterhouse shutdowns, criminal prosecutions of animal cruelty, and recalls for health concerns,” all costly to the industry. To protect profits, animal agribusiness uses its lobbying muscle to create laws that criminalize taking a photo of abuse, while the abuse itself is not a crime. While every ag-gag bill introduced in 2013 was defeated, there’s a new batch being introduced for 2014 and one has already passed, in Idaho.

Bob Martin, director of Johns Hopkins Center for a Livable Future’s Food System Policy Program, told us that he often feels frustrated by the pace of progress in Washington and confessed that he felt more heartened by the energy at this forum than in a typical day of policy work.

Martin’s organization has overwhelming proof that the current use of antibiotics in concentrated animal feeding operations (CAFOs) presents an “unacceptable level of threat to public health,” and even years ago, legislators said “we should be looking at this issue as though our hair was on fire.” However, the FDA rendered Congress’s mandatory guidelines for antibiotic use voluntary, and thus unenforceable.

Gregory Dain, senior assistant regional counsel for the U.S. Environmental Protection Agency, which attempts to regulate some of the harms to the environment caused by industrial agribusiness, answered a direct audience question – “Does government regulation work?” – by saying “the CAFO permitting program is extremely hard to implement.” CAFOs are allowed to let waste overflow “for legitimate reasons,” and EPA staff have to see the violations firsthand within 24 hours, and even then cannot require a permit. Erik Olson of the National Resources Defense Council confirmed that laws and regulations also don’t touch major greenhouse gas emissions from animal agribusiness – even though the emissions rival those of our nation’s transportation industry, which is now heavily regulated.

All of the experts agreed that, while part of the solution is regulatory, people should think about their diet and about moving in the right direction, toward plant-based diets.

3. People need to see the connection between animal welfare and human health impacts.

The most chilling aspect of Bob Martin’s keynote was his implication that the overuse of antibiotics in CAFOs could medically bring our country back to the 1920s, before the invention of antibiotics, because we could lose antibiotics altogether. He said, “think about dying because you had a tooth pulled and then got a jaw infection. That could be our future if we don’t make changes now.”

Even the environmental experts agreed that antibiotic resistance is the most immediate threat caused by industrial animal farming, even more so than climate change. Martin said it is the cause behind most hospitals deaths from “complications from surgery.” Even veterinarians are seeing antibiotic resistance when treating companion animals!

Martin called for building awareness of this issue from the ground up like a political campaign, such as creating public information ads or a documentary, to show the public their risk due to this exploitation of animals.

4. Change has to happen from the bottom up. Individuals are the key to reform.

Every single speaker stressed that the answer to these problems is not top-down legal reform or government regulation, but actions that individuals can take every day:

Note: The only primarily non-vegan perspective in the forum was offered in a panel by “beginning farmer” Margiana Petersen-Rockney and Nathan Rosenberg of NRDC. Their premise is that if we increased the number of slaughter plants (there are relatively few due to animal agribusiness conglomerates), farmers wouldn’t have to transport animals as far, thus saving the farmer money and making local meat cheaper, and causing less stress on the animals.

While this hardly seems like a solution to the enormous problems outlined by the other speakers, not to mention that none of us would support new systems including food animal slaughter, it was nevertheless interesting to note that the only solution these speakers offered for moving toward regional food systems was completely grassroots-based, working from the ground up, such as pro bono lawyers fighting for small and family farms.

I’ll end with summarized remarks from Paul Shapiro (you can also hear him on OHH’s podcast — Episode 217):

We’ve come a long way, but we have a long way to go. These [industrial animal farming] practices didn’t come about overnight and won’t go away overnight. But the practices are not a secret anymore. Violence and cruelty are being inflicted for no reason other than wanting cheap meat. Years from now, people will think, “How could anyone have let that happen to billions of animals?” I hope, when we reach that day, you’ll feel proud of your participation in that struggle, and say, “I didn’t stand by, I got in there on the side for animals.”

If you have any questions about more details of aspects of these presentations, please contact me at sbesl [at] post [dot] harvard [dot] edu or on Twitter, @rockyc5.

Sophie Besl is a vegan living in Boston, MA. She fundraises and volunteers for the Massachusetts Society for the Prevention of Cruelty to Animals, the Animal Rescue League of Boston, and The Humane League. She graduated from Harvard in 2008 with a Bachelor’s in Government, and currently works at a nonprofit that helps low-income Americans get better paying jobs through education and training. She’s the proud mommy of three small dogs.