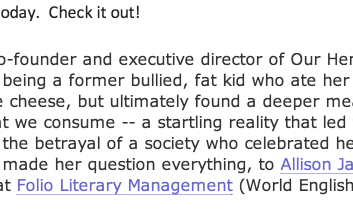 I feel so incredibly honored and lucky to be able to share my story in this way. The book is coming in 2016. I will now go into hiding until my manuscript is due. (Friends/Family: See you next year.)

It takes a village, apparently, to make a book happen. I feel so lucky to be a part of that village.

There are a few people and things I want to shout out: First of all, this book came as a result of interest generated from an article I wrote in late January for MindBodyGreen, “What Losing 100 Pounds Taught Me About How We Treat Overweight People.”

Some background on that article: I wrote it last September. At the time, I was a fairly new student of tap-dance extraordinaire Barbara Duffy, a teacher and performer who brings electricity to her classes, choreography, and performances. I was (and am) studying with her at the American Tap Dance Foundation in the West Village.

Back in September — a very hard and sad time for me, because that was when my beloved grandmother became very sick, and ultimately passed away — I would grasp onto tap as an escape from the horror of what was happening in my Real Life. I wasn’t even a great tap-dancer, but something about making loud noises with my feet in an intentional and expressive way left me feeling inspired and refreshed — and that might be the sole reason I didn’t wither and die as my foundation (Grandma) seemed to crumble around me. Anyway, my tap classes were my escape, and even after class was over, the energy stayed with me, providing me with a jolt of creativity that frequently lasted through the night — into the wee hours, which is precisely when I would write. I would channel my sadness and angst into my writing, motivated by my tap friends (and by Barbara), as well as by the exuberant animal rights community around me.

So I wrote the aforementioned article, and submitted it to my Huffington Post column. It was promptly declined. (A friend and fellow HuffPo blogger later told me that she assumed it was declined because it talked about how I was in a commercial for Fat, Sick, and Nearly Dead — which is seen as self-promotional, and that is against their rules of publication.) Anyway, life took over, and I forgot about my unpublished article.

Then, by coincidence, I ran into journalist (and now friend) Nell Alk at a vegan dinner celebration in late October. We started chatting about the way the world has changed for me and to me since my weight loss, and I remembered my (now dusty) article. I mentioned it, and Nell asked why the hell it wasn’t published. She asked me to send it to her, and I did. Nell then did an introduction to the editor at MindBodyGreen, who said they’d love to run the piece.

Within a few days, it had 60,000 Facebook shares (to date it has just about 90k), and my inbox was overflowing. One of the notes was from Allison Janice, editor at Berkley Books, an imprint of Penguin Random House. Allison asked if I’d ever considered writing a memoir with veganism and animal activism as central themes.

In fact, I had considered that, but was never sure how to get from here to there.

(And you can imagine how outstanding it was to even get this message from her. I called Mariann to tell her — from tap class, coincidentally — and her response was simply, “Holy fuck.” That’s about when I knew that something major was possible here.)

I knew I needed an agent, so — along with the help of my author friends (and mentors) Gena Hamshaw and Victoria Moran — I set up some meetings. (As an aside: One agent was encouraging me to make my book focus on food policy, and — within that context — to talk about how virtuous hunting is because it “gets you closer to the source” of food! Clearly this was a mismatch.)

Enter Steve Troha, the amazing agent at Folio Literary Management who I wound up signing with and working alongside throughout the (sometimes painful) process of writing a proposal. Steve and his assistant, Dado Derviskadic, were like dreams to me. They provided me with constructive feedback throughout the process of writing the proposal that, I swear, will forever inform my advocacy! They encouraged me to pay attention to whenever I started to maybe perhaps kinda proselytize (who, me?!), and then take a step back and tell a story of something I experienced — a personal anecdote that makes the same point (but in a more digestible, accessible way).

The entire time, it was my partner in life and crime, Mariann Sullivan, who dealt with my hysterics (both the good and the bad) and my edits, and also shared in my excitement (while keeping my head screwed on straight). She is the reason this is happening. I could not do this — or anything else — without her brilliance and support.

Two and a half months later, I had a deal with Berkley, working with the absolutely charming and passionate Allison Janice (a vegan herself).

It takes a village to make a book deal (I AM SO GRATEFUL!), but it takes an author to write that book — and so it begins…