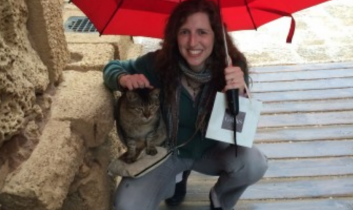 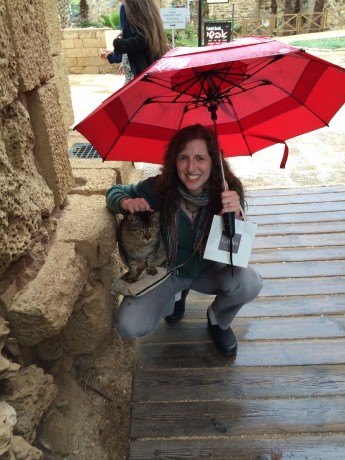 A cat in Caesarea’s managed TNR colony claims my lap and earns lots of love.

Cats are everywhere in Israel, like squirrels in American suburbs. But while squirrels seem able to take care of themselves, the street cats in Israel look pathetic. They are skinny and dirty. Many appear to have eye infections, ringworm, and wounds. There are lots of kittens.

It’s so bad that when I visit there and go out for a walk, I bring food with me to give to the many kitties I know I’ll see and feel sorry for.

When I visited Israel in March, I was shocked by the improvement since my last visit three years ago. It was most notable in Caesarea, an ancient city with a large complex of excavated ruins that also houses some artists and restaurants right on the coast. Over the course of several hours I saw only a handful of cats, all adults, none skinny. With only one exception, these cats adored humans. As soon as I showed the first sign of interest they were all over me, jumping on my lap, following me if I dared walk away.

Caesarea’s cats are ear-tipped – that means the tip of one ear is cut off as a sign that the cat has been spayed or neutered and needn’t be trapped again. The ear-tipping and BMI of this cat colony suggest that someone feeds them regularly. The only thing that worried me was the ringworm infection the cats all shared. Even so, this was a big step up from what I’m used to seeing in Israel.

The lot of the cats in the Tel Aviv suburb where I usually stay also seemed better. It was a far cry from Caesarea, but I did see fewer feral cats, and the ones I saw looked to be in somewhat better shape than in the past.

Another dramatic change in Israel over the last three years is the increase in awareness and promotion of veganism. It was not that long ago that most folks didn’t know what veganism (“tea-vo-newt” in Hebrew) meant. Now menus in restaurants of every stripe indicate which selections are vegan, even if the only eligible dish  is the house salad. Vegan restaurants are popping up everywhere, including a delicious Georgian one (Nanuchka) that is among the trendiest eateries in Tel Aviv.

Israel’s Prime Minister, Binyamin (Bibi) Netanyahu, may have played a role in both these items of good news for animals. (I am not stating or implying any opinion about his politics on any other subject, so please hold your fire on the hate mail.)

His government committed over $1 million to trap, neuter, and release 45,000 feral cats by this June. I first wrote about this government measure in early November 2013; assuming a feline gestation period of around 65 days, enough time has passed to not have two litters of kittens, so the reduction in headcount that I noticed could be related to the public TNR program.

The credit for the feral cats’ improving circumstances doesn’t go exclusively to public officials. Awareness of animal suffering and the will to end it is on the rise among the Israeli public. One example is this video by media communications students from Israel’s Interdisciplinary Center calling on viewers to support trap-neuter-return. The students’ message and their thank-you to the city of Tel Aviv for embracing TNR reflect changing public sentiment.

Netanyahu is also making a bit of noise about the plight of animals raised for food. VegNews reported in November 2013 that he and his wife, Sara, were joining the Meatless Monday movement and reducing their meat consumption generally. “With my responsibility as prime minister to protect the lives of people here, I feel committed to increase awareness to fight cruelty toward animals,” he told The Jerusalem Post. Drawing a connection between protecting people and the well-being of animals may have been a political gimmick, but it sure sounds like some sophisticated thinking. 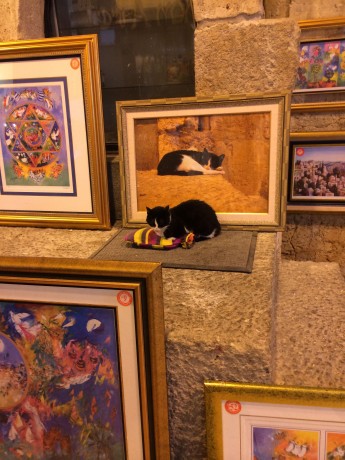 In Jerusalem’s Cardo market, a painter’s booth features a portrait of this black and white looker along with a soft mat and warm water bottle for the feline muse on a cold, rainy day.

Israel is no stranger to animal welfare debates. This is a country that banned foie gras over ten years ago, even though that put domestic companies out of business. It is one of only two countries that prohibit animal testing on both cosmetics and household products (India is the other). But awareness of cruelty in one area of animal exploitation doesn’t always translate to conscientiousness about other species.

One reason for these strides may be a change in the popularity of pets. Relatively few Israelis kept pets until fairly recently, when an influx of Russian immigrants seems to have popularized the practice. Maybe this has stoked empathy for the once-reviled street cats and even for animals raised for food.

Whatever the cause, the increases in awareness and in the practice of both TNR and veganism in Israel are great news for the country’s animals.