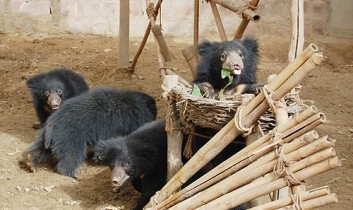 Today, lawyer and activist Frances Carlisle shares her recent experience visiting the Agra Bear Sanctuary in India, and tells us about the lives of India’s “dancing bears.” 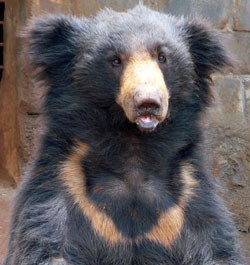 When I booked a vacation to India, the place I most wanted to visit was the Taj Mahal, considered one of the wonders of the world. The Indian poet Tangore described it as “a teardrop on the cheek of eternity.”  So I was sure that seeing this monument would be the highlight of my trip.

Of course, India has many interesting places to visit, and because I have a strong interest in animal protection, I asked the company handling my India tour if we could fit in a stop at an animal sanctuary. Luckily, the Agra Bear Sanctuary was located on the road from New Delhi to Agra where we were headed to see the Taj Mahal, so it was easy to include a stop there. And, as it turned out, visiting the bears turned out to be even more memorable than seeing the Taj Mahal.

The bear sanctuary – which is managed by Wildlife SOS, an Indian charity – is located within a larger bird sanctuary in a heavily forested area, and many residents of New Delhi visit to get away from the polluted city air. We first enjoyed walking around the bird sanctuary and photographing some very tame deer who were lounging around. Our sanctuary stop was, at this point, a lovely interlude, but not a life-changing experience…yet.

Then we met our bear sanctuary guide, and it was then that I learned something about the history of the bears we were about to see and of the kinds of lives they lived before coming to this haven. For hundreds of years, a tribe in India called the Kalandars made a living by training bears to “dance” as a form of entertainment.  Poachers took bear cubs from the wilderness areas in India, sold them to the Kalandars, and the cubs that survived endured brutal training and the infliction of pain, so that they would stay up on their hind legs and “dance.” For hundreds of years, the bears entertained Indian royalty, and more recently they were used as street entertainment for tourists.

Our guide started our tour by showing a short documentary film called “The Last Dance” about the lives of India’s “dancing” bears. I was traveling in India with my sister and daughter and, in a bit of a stupor from jetlag, we were unprepared for what we were about to see. When a scene came on about the poaching of baby bears from the forest, it was heart-rending. We jumped up in unison and ran out into the sun. (I did watch the entire film later on the Internet and found it to be informative and well worth watching. Notably, it is introduced by Jane Goodall, one of my idols.)

Our guide then took us to see the bears, who are all members of a subspecies called sloth bears, unique to India, who eat insects and fruit. They have a lovely black shaggy coat and mane, and long curved claws, good for digging in the dirt for insects. They live about 30-35 years. 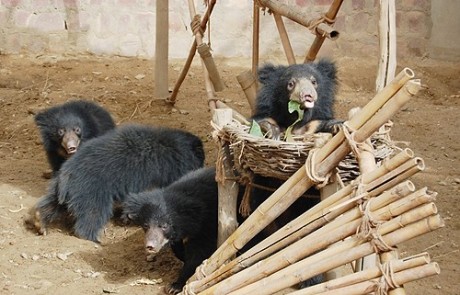 When a new bear is brought in, he or she is quarantined, and injuries, especially to the muzzle, are treated by staff veterinarians. After a socialization process, the bear is eventually released into one of the large forested enclosures where the bear lives with a compatible group.

Although there is fencing up, the areas where the bears are kept is so large that I could not even see the fencing on the other sides. The bears live in the forest, but also have indoor enclosures with open doors so they can come and go at will. I saw bears digging, climbing and generally relaxing.

We were saddened to learn that some of the bears were blinded in their former lives as dancing bears, due to the practice of cutting into the muzzle and putting a rope through for control, which can result in injury to the optic nerves. Fortunately, the Agra Bear Sanctuary has built special areas for blind bears, and we saw about a dozen of them in a fairly large enclosed outdoor/indoor area, where they were able to get to know the space and feel secure and comfortable. They were enjoying a meal of strawberries.

Our guide told us the good news – that all of the dancing bears are now off the streets and in sanctuaries.  Although it has been illegal in India to have a dancing bear for many years, it was not until 2012 that the last dancing bear was surrendered to the sanctuary. What finally ended the practice was not the law, but a program to compensate and find other employment for the Kalandar tribesmen who made their living from the bears. The Kalandars (both men and women) received training for other jobs, seed money so they could start small businesses, and school subsidies so that their children could be educated.

Another contributing factor to the actual eradication of the industry, so many years after the law was passed, was the establishment of bear sanctuaries in India, which meant that, finally, there was a realistic alternative for housing the bears humanely. There are 300 or so bears at the Agra Sanctuary, and more rescued bears in sanctuaries in Bhopal, Bangalore and West Bengal. 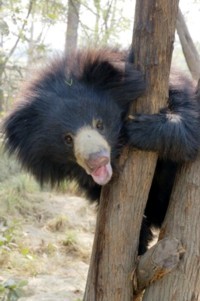 The only jarring note in the visit was that a few of the men who had owned dancing bears are now employed at the sanctuary. This seemed like a bad idea to me, as a bear might remember his tormentor, but I was assured that the personnel are supervised and the policy is to treat the bears kindly and let them forage and enjoy being outdoors.

We ended our visit by buying sloth bear T-shirts and handicrafts in the gift shop and by making a donation to Wildlife SOS. They have high annual costs to care for all of the bears in the four sanctuaries and so need support.

It is quite an accomplishment for India to have banned the dancing bear business. When there are economic interests involved, it is difficult to stop even the cruelest practices. But Kartick Satyanarayan and Geeta Seshamani, co-founders of Wildlife SOS, along with International Animal Rescue, a UK charity, and Free the Bears, an Australian charity, worked for many years so that these bears could have a new peaceful life. Finally an animal story with a happy ending – now that is memorable. 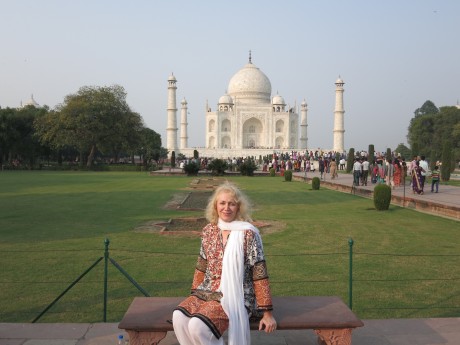 Frances Carlisle is a trusts and estates attorney practicing in New York City. Her estate planning work for clients includes the preparation of wills and trusts, including trusts for the care of animals. Ms. Carlisle is admitted to practice law in New York, New Jersey, Florida and California. She has organized conferences on puppy mills, horse protection issues and global warming. She has written articles and is a frequent lecturer on the topic of estate planning for the care of animals, and is a guest lecturer at four New York area law schools.