Book Review: “The Green & The Red” by Armand Chauvel, translated by Elisabeth Lyman 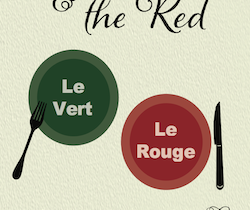 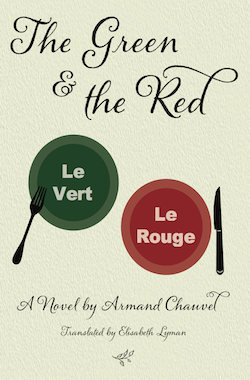 “She’s a vegetarian. He’s a carnivore. Will it be a table for one?”

The Green & The Red (Ashland Creek Press, 2014) had me from the back cover blurb. And the novel by Armand Chauvel, translated from the French, makes good on its promise of a fun, engaging story of two people with a mutual attraction who don’t see eye to eye when it comes to food.

In a small French town immersed in the culture of cuisine, Léa struggles to keep her new vegetarian restaurant afloat. Her irascible sous chef is defiantly vegan and eschews any type of imitation meat products as perpetuating “the ideology of meat as a necessity.” Across town is Mathieu, the ambitious marketing director of the region’s largest pork producer. Oblivious to how his sausage is actually made, he views vegetarians as “malnourished and aggressive hippies” and a veritable danger to the food culture in all of Brittany. But he sees a way to counteract the vegetarian threat and at the same time elevate his status in the company by proposing a pork museum to be built on the very plot where Léa’s restaurant is beginning to win over fans.

What Mathieu doesn’t count on is falling for his vegetarian adversary. He tries to convince himself that she’s too skinny, that her translucent skin is mere “tofu-like pallor,” but he is smitten. Making matters worse, he finds himself savoring Léa’s delicious vegetarian cuisine. (Indeed, maybe a French thing, maybe a vegan thing, but I loved the descriptions of Léa’s menu: beet carpaccio with arugula, portobello gyozo, pumpkin wonton soup … and the desserts, wow!)

There are many entertaining moments that play off the conflicting, often disdainful gastronomic attitudes of the characters. Léa must sit through lunch with her banker as he gorges on a steak, while she secretly thinks, “His plate looked like a battlefield. A mound of green beans had resisted all attacks from his fork, while some distance away, a piece of bone and a few chunks of fat lay in a pool of blood.” Mathieu imagines Léa’s restaurant as “a feeding trough full of carrots, cauliflower, and lettuce leaves. A row of pale, sad-looking individuals sitting alongside it, chewing in silence, occasionally washing down their cud with gulps of weak chamomile tea. Hare Krishna music would be playing in the background.”

The Green and The Red is not all fluff, however. Chauvel, a French journalist who became vegan after seeing Earthlings, is knowledgeable about the suffering endured by animals, as well as the health and environmental costs of eating meat. Together, Mathieu and the reader come to learn about how pigs are raised for food, the devastating environmental impacts of factory farming, and the health implications of meat consumption. Mathieu finds himself ethically and emotionally challenged by what he learns.

Achieving all this in a disarming, romantic comedy with elements of Shakespearean farce is no small feat. Translated with charm and humor by Elisabeth Lyman, The Green & The Red is delicious and would make an excellent gift for any reader – carnivore, vegetarian or vegan. Ce livre est pour tout le monde!